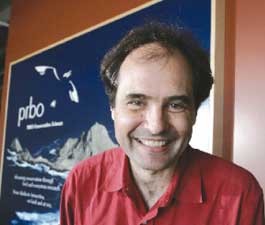 With North Bay colleges offering certification in sustainability and more new construction taking the LEED, green comes into its own

At the very edge of Shollenberger Park in Petaluma, right where the 165-acre bird and wildlife sanctuary ends and the adjacent commercial development begins, stands the newly opened Conservation Science headquarters of the Point Reyes Bird Observatory (PRBO). This is a remarkably practical metaphor–geographically speaking–for the delicate balance of nature and “progress” that the PRBO and a growing number of shrewd and prudent environmentalists are actively working to promote.

A 40-year-old institution founded to advance conservation through expansive programs of bird and ecosystem research reaching from Alaska to Antarctica, the PRBO has 125 scientists doing research year-round and, seasonably, all over the country, the earth and the ocean. All of this is described in detail inside the PRBO’s brand-new building, the organization having just moved its public arm from the Bolinas Mesa.

In the new presentation room, a gorgeous display featuring photos of warblers, wrens, terns, yellowthroats, penguins, herons and hummingbirds are arranged attractively on a series of large, wall-mounted white maple “flip books” that explain the institution’s history, its work battling the results of climate change and challenges to conservation, and the various ins and outs of data collection, bird banding, mapping and fact-gathering that occupy its field scientists. The evocative, museum-quality display was created by the Fairfax-based EduTracks, overseen by author-environmentalist (and EduTracks founder) Andrés Edwards.

An educator, media designer and environmental-systems consultant with 15 years of expertise on numerous sustainability topics, Edwards founded EduTracks to create educational displays and programs that specifically focus on sustainability. Much of his interest in environmentalism was sparked by an 800-mile bicycle trip across Tibet that he took with two friends in 1987. The trip greatly affected his views on ecology, as he was brought face to face with Tibetan farmers and indigenous nomads struggling to survive in areas that had been blasted by decades of environmental neglect. The trip inspired a book, Tibet: Enduring Spirit, Exploited Land, originally released in 1998 in a full-color hardback edition with photos by Galen Rowell, and recently reissued in paperback form.

But that wasn’t all. With his bike-riding buddies, Edwards formed an organization called Tibet Environmental Watch to keep an eye on and tell the world about the worsening environmental situation in Tibet. A graduate of New York University, Edwards eventually found himself in Monterey, working for a company that designs video productions and educational exhibits for museums, zoos, galleries and aquariums.

Edwards eventually moved up to the Bay Area, where he co-designed the popular Tot Spot at the Bay Area Discovery Museum in Sausalito, as well as the Liberty Ships exhibit currently on display at the Maritime Museum in San Francisco.

Continuing his interest in sustainability, Edwards has recently taken to co-designing educational “kiosks” that tout LEED (Leadership and Energy in Environmental Design), an industrial standard for environmentally friendly buildings, developed by the nonprofit U.S. Green Building Council in Washington, D.C. LEED standards are a kind of “green materials” ratings system, utilized by builders to maximize the level of sustainability in new and retrofitted buildings.

These standards take into account the materials used in creating the building; the way the building is designed to use energy and how much energy it ends up using; the use of water within the building; and the general “healthfulness” of the place for those who live or work there. One of Edwards’ LEED displays can be viewed at the LEED-rated, solar-powered, sunlight-drenched Cotati Police Department.

While not constructed in a fully LEED-rated building, the interior of the PRBO offices and laboratories are still a good example of environmentally friendly construction, designed to include as much recycled and environmentally safe materials as possible. The counters and office dividers are made of “wheatboard” fashioned from straw, and even the carpets were chosen for their use of nontoxic adhesives. While one might expect such green flourishes in a building like PRBO’s, Edwards, in a recent late-morning interview in his Fairfax office, is quick to point out that the move toward sustainable construction practices has jumped the environmental fence and is now moving out into the mainstream.

“This whole thing has been taking the building industry by storm,” Edwards says. “Finally, with the LEED concept, there’s a standard to go by. It’s creating a way in which architects and builders and owners can shoot for a certain standard that can make environmentally friendly buildings. It’s transforming the whole industry.”

Edwards describes these transformations in detail in his book The Sustainability Revolution: Portrait of a Paradigm Shift, a popular work featuring dozens of experts making the case that sustainability, environmentalism and green building have moved distinctly in from the distant eco-fringes. Suddenly, such practices are being seriously talked about–and put into practice–in colleges and universities, as well as in the worlds of business, commercial production, land development and building design and construction.

The book was released last year and sold close to 5,000 copies in the last year. Quickly adopted and used by several higher learning institutions as a primer of evolving sustainability philosophies, The Sustainability Revolution (described as the “Rand McNally Atlas of sustainability” by Mathis Wackernagel of the Global Footprint Network) is now in its second printing and still selling well.

According to Edwards, a growing number of businesspeople are finally embracing the belief that being good to the environment is good for the bottom line, because, when properly carried out, green business activities actually can save companies money. Edwards, as a pro-sustainability advocate and a businessman, is in the perfect position to describe the line between the environmentalist world and the commercial world, since he walks that line every day.

Computers are a good example of where that line lies. “It gets very complicated when you start thinking about technology and all the waste associated with computers,” Edwards says. “There is so much that has to be dealt with in regards to toxins and all the chemicals used in building a computer, but I think that what’s good with this kind of technology–just in terms of the materials–is that [with computers] you are recycling electrons. It’s the way the whole world is going.

“We are becoming a digital world, with digital cameras and digital audio. Everybody is digitizing. As the bandwidth expands and the web and other things expand, it’s going to become easier and easier for movies and audio and television. I definitely see it as the wave. We’ve gone from the linear to the digital.”

According to Edwards, the sustainability revolution is flourishing in and on the campuses of schools, colleges and universities. At the College of Marin and the Indian Valley College–campuses sustained by a $250 million bond approved last year–a literal and philosophical renovation is taking place, as the Kentfield and Novato campuses undergo a strategic transformation into fully green institutions.

At the College of Marin, Edwards has been working with renowned ecological architect Sim Van der Ryn. The author of such books as Ecological Design, Design for Life and The Toilet Papers: Recycling Waste and Conserving Water, Van der Ryn is the director of COM’s new Center for Regenerative Design, established to assist the campus in its greening efforts. (Edwards has just been named its co-director.) The two offered guidance on details of the school’s built environment–buildings, classrooms and physical structures–and consulted on the way the campus buys and sells its food, uses its water, approaches issues of energy and improves and protects the general health and well-being of the college’s students and faculty.

“It’s the perfect time, right now as the college is going through its greening process, for the students to be participating,” Edwards explains. “We hope to use the center to work with the people who are right here in Marin, to develop awareness of these possibilities, and to make the College of Marin a world-class model of a sustainable community college, with the Center for Regenerative Design act as the gateway to the future, one that can be replicated at hundreds of other community colleges around the world. It’s already happening.

In Edwards’ philosophy, all of this is further proof that sustainability, contrary to previous reports, really is good business.

“When I think of sustainability,” Edwards says, “I’m looking at it in terms of taking a holistic, integrated perspective, incorporating the environmental, the economic and the social issues, and then I add education, which I think is critical. Education is the catalyst for action.”

Environmentalism, he says, has been focused mainly on the environment, while sustainability has come to mean something wider, something that includes environmentalism but also encloses the issues of economics and business, the social structures in which we live, and the educational systems that teach our values. According to Edwards, achievement of true sustainability will only come when the relationship between all those factors is strong and united.

“It’s happening not just at the local level,” Edwards says. “It is happening at the community, state, national and even international level. In a lot of developing nations, a lot of communities are leap-frogging past putting in telephone wiring and going straight to cell phones. That’s good news. Sustainability is not a special-interest issue. It’s the context for all other issues. Our economy and our well-being are dependent on the life-support systems of the earth.”

The biggest misperception people have when they think about sustainability is the notion that by adopting a sustainable approach they will be losing something vital or convenient, that embracing sustainability will somehow hinder their well-being, their quality of life or their financial growth. Businesspeople have for years complained that the pursuit of sustainability, while certainly nice to think about, will always lead to a loss of profit. Working people have believed that becoming sustainable would mean sacrifice and inconvenience.

But according to Edwards, if we begin to adopt a different view of how to run our businesses, how to run our towns, how to develop transportation systems at work, we will end up experiencing a series of incredible, social, economic and environmental improvements.

“When everyone finally accepts that sustainability is economically viable–and they will, because they will have to,” says Edwards, “then the revolution will have reached its next level. You can be sustainable and make money–and big business is now beginning to discover that.”