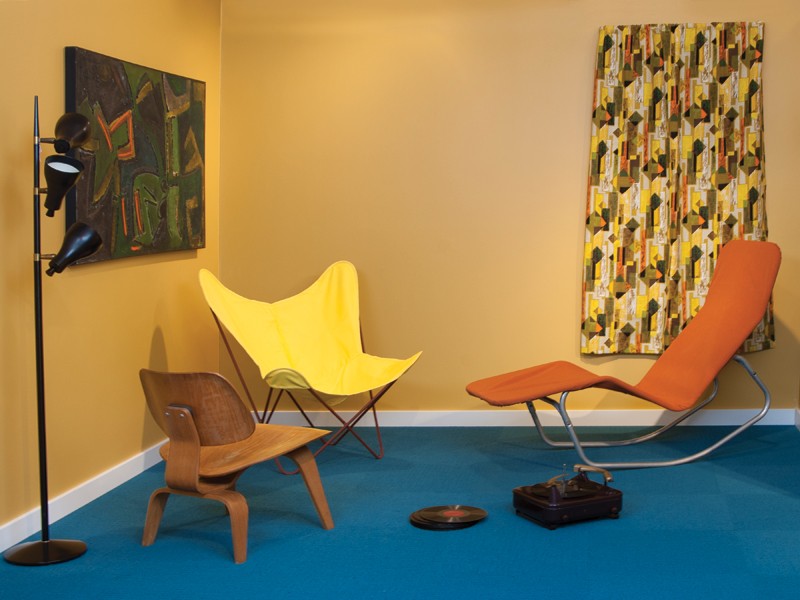 You know how it is sometimes when Mad Men‘s plot begins to drag but you’re not ready to stop watching though you are ready for something else to look at so you just sort of dream over Don’s furniture while you wait for the next lurid part?

We thought so. The era’s furnishings are a worthy obsession—and an enduring one.

Charles Schulz could be considered Don’s sober twin, at least in furniture. A new exhibit, “Mid-Century Modern,” running through Oct. 27 in the main gallery of his eponymous museum, celebrates Schulz’s environs as seen in his strips, enlivened as they were by clean severe lines, über-functionality and the work of Ray and Charles Eames. (A strip from the era shows Linus standing in a room of linear contemporary furniture wondering what the heck a rocking chair is.)

“His wife was really into design,” explains Schulz Museum marketing director Gina Huntsinger, pausing by a Hassel Smith painting lent for the exhibition. “So he was drawing the stuff that was in the house.”

In “Modern,” the museum staff has recreated Sparky’s strips right down to the curtain treatments and the rugs.

Best of all? No lurid parts.

A panel discussion on the enduring pleasures of the midcentury modern aesthetic featuring the editor of Dwell magazine, as well as an architect, a member of the Eames Foundation and an expert from Scandinavian Design is slated for Saturday, June 29, at the Charles M. Schulz Museum. 2301 Hardies Lane, Santa Rosa. 4pm. Free with museum admission; $5–$10. 707.579.4452.