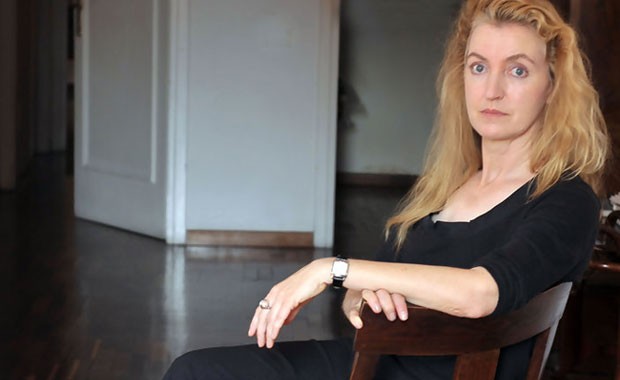 Rebecca Solnit pulls together life's loose threads in 'The Faraway Nearby'

The National Gallery of Iceland sits at the eastern shore of Tjörnin lake in Reykjavík’s city center, overlooking both a modern city hall and the centuries-old Hólavallagardur cemetery. In late June, bright sunlight reflects off the surface of Tjörnin for 21 full hours every day, from 3am to midnight.

But in 2008, a young Icelandic artist named Elín Hansdóttir built a labyrinth inside of the National Gallery, almost completely dark within. Path, made up of a series of panels set in a zigzag pattern, offered one person at a time the immersive challenge of finding his or her way back to the beginning. Sometimes, guides would have to go into the darkness and rescue visitors who had lost their bearings.

It was an exhibit that San Francisco writer Rebecca Solnit returned to again and again during her months as an international resident at the Library of Water, 70 miles from Iceland’s capital, Reykjavík.

Solnit looked to the labyrinth as a narrative toolbox for her latest book, The Faraway Nearby, she says over coffee and bread at a cafe on the downtown Sausalito waterfront. “A lot of books have these linear routes, like highways, let’s get from here to there,” she says. “I wasn’t in a rush to get from here to there.” Solnit appears June 30 at the New School and Commonweal in Bolinas and July 2 at Copperfield’s Books in Petaluma.

A lover of works like Tristram Shandy, the 18th-century novel where the narrator announces he’s going to tell his life story and then digresses to such an extent that he’s not born until halfway through the book, Solnit set out to create a work of “circuitous routes and byways” in The Faraway Nearby. In one respect, the book tells the story of her mother’s descent into Alzheimer’s that ended with her death in June 2012, and what Solnit calls her “medical adventure” after pre-cancerous cells were discovered during a routine mammogram. But these are but two threads on a journey that includes Che Guevara, the Snow Queen, Frankenstein’s monster, Mary Shelley, cannibalistic polar bears, cannibalistic mothers, Icelandic fjords, mountains of apricots, arctic explorers, Baby Jessica, Charlie Musselwhite, invasive surgery, 2.2-pound babies, leper colonies, Burmese monks and boys named after wolves.

In fact, the British edition of The Faraway Nearby has been given a hyphenated genre: “memoir/anti-memoir.” It’s a proposal that came directly from Solnit as part of her desire to articulate a “different sense of self.”

“The version of self we’ve been given, in some ways, by psychology and therapy—that sort of post-40 thing—it feels really reduced to me,” Solnit explains. “The relationship to the earth itself gives you this depth and breadth and height and range. It gives you a kind of vastness; and then personal is right in the middle of it, and I absolutely value it and it absolutely matters, but to me, it’s like home. You come back to it. You’re not an agoraphobic who never leaves it.”

We’ve met on Sunday morning near the rowing club where Solnit takes to the bay on a sleek, white scull three times a week. Today, she’s decided against going out, on account of the strong, cold wind blowing across the water, and it’s appropriate that the strange June weather has created a steel-colored sky, similar to what Solnit might have seen during her stay in Iceland—one of those symmetries that’s present in so much her work.

Wearing a gray, fitted blouse over a black skirt, Solnit’s appearance mirrors the dependable elegance of her sentences, whether she’s writing about Google buses driving through San Francisco—with their darkened windows and screen-immersed tech workers—or migratory birds flying to the Arctic from all over the world. She talks of exhaustion after this particular book tour, where she’s answered too many questions about a conflicted relationship with her mother, but it doesn’t show on her face, which glows with health underneath her long, blonde-gray hair.

Throughout her career, Solnit has turned out more than 13 books and an impressive list of essays, including “Men Explain Things to Me,” wherein she coined the term “mansplaining.” In February of this year, Solnit contributed a piece to the London Review of Books taking on Google’s private buses and the erasure of the working class and creative communities in San Francisco as the city becomes a bedroom community for Silicon Valley’s tech elite. Solnit’s love of the city intertwines with a fascination with maps in 2010’s ambitious Infinite City: A San Francisco Atlas; in one example, a map of San Francisco interposes murder sites with locations of Cypress trees. (A New Orleans sequel to Infinite City, titled Unfathomable City: A New Orleans Atlas, comes out this fall.)

Now in her early 50s, and a graduate of UC Berkeley’s journalism school, Solnit has written about visual arts, politics and the West Coast since 1988; she shares space with other California writers like Mike Davis and Joan Didion, those willing to take on the Golden State as a complex and serious topic of inquiry rather than a place of kooky mysticism, Hollywood superficialities and gridlock. River of Shadows, an examination of photographer Eadweard Muybridge and his groundbreaking experiments with stop-motion photography, earned her a Guggenheim Fellowship, a Lannan Literary Award and the National Books Critics Circle Award in criticism.

Solnit approaches the interaction between humans and the natural world—its puzzles, connections and symmetries—with a blend of precision and childlike wonder. That might stem from her early years as a child growing up in a northernmost subdivision of Novato.

“It was not a particularly encouraging suburb, but there were wonderful things,” says Solnit. “A lot of kids on the block never left the asphalt, but my brothers and I were really fascinated by the natural world in different ways, and spent time there. I had fantasies about living like Native Americans, off the land and the plants. The landscape was my one good friend in elementary school.”

Connection forms the literal core of The Faraway Nearby. As Solnit’s close friend, the artist Ann Chamberlain, was dying of breast cancer, she constructed a plaster wall map of topographical reliefs of islands connected by strands of fine red thread, “like flight routes for planes or birds or neural pathways or blood vessels,” writes Solnit. And it’s a young Icelandic man with leukemia, who dies before Solnit has a chance to meet him, who forges the connections leading to her residency.

“That piece [by Ann Chamberlain] is essentially at the exact center of the book,” Solnit says. “The whole book could be conceived of as these islands of stories connected by threads.” This is the world Solnit reminds us we all live in, the world of “waves and not particles.”

“Maybe that’s my form of mysticism, trying to see these complex patterns of influence, presence and possibility that we’re embedded in—you know, this kind of nonseparation, even when we’re supposed to be alone,” she adds.

Though some have focused on the dysfunctional aspects of Solnit’s relationship with her mother, as documented in the book, she’d rather not dwell in that space for long. Like the piles and pounds of apricots, picked from a tree after her mother’s house is sold and then deposited in Solnit’s living room, their relationship was one of decay and preservation.

“One of the things that’s been really difficult is that I went through this really beautiful seven-year journey with my mother that ended with her death,” Solnit says. “She was many people along the way, to whom I related in various ways, and everything that was difficult about the past was essentially shed in that process.”

Just a couple of weeks ago, on her way home from speaking engagements in Europe, Solnit stopped in Reykjavík to visit her friend Frida and found herself repeating the phrase “difficult but not bad.” “Easy” and “comfortable,” she says, are things that Americans have grown not only to desire but to expect. But, as Solnit touches on throughout The Faraway Nearby, death, pain, illness, aging and suffering are not exceptions in life; they are the rule—for everyone, not just the unlucky. And they just might lead a person to her ultimate destiny. But it takes a healthy dose of empathy, acceptance and interconnectedness to weather and survive these unskirtable conditions—if we survive them—with grace and dignity.

“I’m not saying ‘Go have a completely uncomfortable and hideous life,'” Solnit explains, “but sometimes you have to go through these things that aren’t so encouraging or aren’t so easy. Sometimes you have to climb the mountains, and not just walk in the flat places, because that’s taking you to the view you need to see to know where you’re going.”