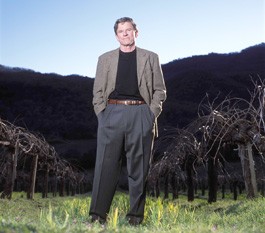 Yes, it's another biodynamic wine story, but this one is moo better

In a field by a vineyard near Ukiah, a 600-pound black Dexter heifer named Rita grazes in the Mendocino sun. Unknowingly, she absorbs cosmic energy through her horns and terrestrial energy through her hooves. She is placid and calm, enjoying a life that seems as sustainable as the hills. Alas, she is doomed. For in the laws of biodynamic farming, first laid down in ink almost some 90 years ago, it is written that manure composted within the hollow horn of a female cow must be spread across the fields—and Rita is the one. She will be sacrificed to the vineyard within several years.

Others have gone before her. Paul Dolan, the man who runs this 200-acre winemaking operation several miles southeast of Ukiah, buys cow horns each year from a local organic beef farmer. As ordained by the doctrines of biodynamic farming, he fills them with estate manure each November and buries them under a fir tree by the farmstead’s vegetable garden, on a bluff overlooking the Russian River Valley. In the summer, he unearths them and in the fall disperses their contents on the appropriate day of the biodynamic calendar.

For almost a decade now, Dolan, who co-owns the Mendocino Wine Company in Ukiah, has followed the often mystifying, sometimes witchy and generally peaceable principles of biodynamic farming. Rudolf Steiner, the Austrian thinker and naturalist who founded the Waldorf system of education, brained up the farming philosophy and its many unusual aspects in 1924 as a response to widespread farmers’ reports of diminishing yields and productivity. The buried cow horn is the most well-known of biodynamic farming’s mandates. Less well known is the practice of filling a stag’s bladder with yarrow flour and composting the sealed sack on the property, or the belief that faraway lunar and planetary cycles affect how wine will taste on a given day.

“I was extremely skeptical in the beginning,” says Dolan, a man of quiet, measured words who first took to the notion of biodynamic farming in the 1990s. “But I stayed with it, stayed connected.”

Eventually it made sense. It took faith, he says, and, indeed, the practice is a sort of dogma. Science cannot quite prove or disprove much of what biodynamic farming is based upon, but a well-tuned individual can supposedly feel it.

“I can walk through the vineyard and feel the energy centers, the areas where the chakras heat up with vibrations,” Dolan explains as we drive past an invisible nucleus of energy, halfway to the highest ridge of his property. He is hosting four journalists for three days, running us through a crash course in biodynamic farming, biodynamic wine and what it all means for the future. Naturally, we have questions for him: Does this matter to consumers, who generally don’t understand biodynamics? Or is it about the environment? If so, why is organic farming not enough? And why, of all things under the sun, is a cow horn required to contain the manure as it matures underground?

To this latter question, Dolan says that the cow horn, in fact, may not be essential to the manure preparation process. The rules of biodynamic farming are still developing; they may be written in the stars, but Dolan and others are the ones writing them. Though Dolan has no plans to abandon the cow horn, some biodynamic scholars believe that it may merely be the horn’s spiral shape that facilitates proper maturation of the manure. In India, Dolan tells us, farmers with a penchant against killing cows use spiral-shaped clay horn molds.

“And it works,” he says, explaining that the manure would putrefy in a vessel of the wrong shape or size; in the horn, he says, the manure gracefully evolves into an odorless, rather pleasant soil.

He leads us into a cave in a hillside by the road—what he calls the “hobbit hut.” Here, in the damp and the dark, a basin of matured manure awaits dispersal across the vineyard. We each touch it; it is silky and soft as it crumbles through our fingers. The manure is supposed to enhance photosynthesis, and one horn’s worth—about two handfuls of the soil—can affect conditions on up to five acres of land, Dolan says.

To some degree, biodynamic farming can be quantified and qualified by science: Dolan once filled a small tub with conventional soil on one side and biodynamic soil on the other. He mixed earthworms into each parcel of earth. By the next day, he says, all the worms had aggregated on the biodynamic side. His winemaker, too, Mark Beaman, once sent soil samples to a lab in Oregon. Measurements found that the biodynamic soil was substantially richer, containing between 30 to 600 percent more amoebas, bacteria, nitrogen and fungi than conventional soils.

More surprising is the notion that lunar and planetary cycles affect how wine tastes. This weekend is prime for winetasting:

Aug. 29&–30. It is then, believers assure, that the energies around and within us allow wines to unfold and fully reveal themselves. In September, the 3rd, the 4th and the 25th are prime days to drink wine, when the bad will taste worse and the good will taste better. On other days, the same wines might taste tight and subdued.

Even big businesses have bought into the principles of the biodynamic winetasting calendar. In Britain, for example, pragmatic wine buyers at supermarket chains Tesco and Marks & Spencer taste sample wines only on “root days” and “flower days,” when the wines supposedly open up and fully express what they are.

For skeptics, wine may always taste just fine regardless of the time of the month. Yet biodynamic principles are hard to argue with at the environmental level. While many organic grape growers tolerate organisms in the adjacent environs and allow them to live in spite of the vineyard, biodynamic farmers often encourage the biodiversity that may encroach upon their lands. And while organic farmers may use nonpetroleum-based pesticides and fertilizers, biodynamic growers introduce nothing foreign to their properties from outside. Some even dry farm their lands, believing that water from another valley will taint the uniqueness of a property’s soil. In winemaking, this means perfect and pure representation of place and soil-to-sky dynamics—terroir at its truest.

Biodynamic winemaking saw its start in Europe several decades ago. In America, the first wineries to adopt biodynamic farming practices did so in the 1990s. Today, Grgich, Bonterra, Joseph Phelps, Cowhorn, Brick House, Frey, DeLoach, Quivira and Paul Dolan are the major names in the local biodynamic wine community.

During our visit, we journalists help Dolan unearth a dozen cow horns filled with manure and now eight months matured. We shake the clods from each horn into a plastic bin. The composted manure will later be transferred to the hobbit hut to further mature, and eventually it will all be mixed with water and sprayed across the property, preferably early in the morning during a time of a waning moon.

One of us asks if there is a reason, cosmic or earthly, that Dolan chose this spot to bury the horns? Nope, he answers. “It’s just pretty here.”

To the west, the hillside drops sharply into the alluvial flats of the Russian River Valley. Streams of cars move north and south on Highway 101. More people than ever before now live in this valley, and its resources are just as limited as they’ve always been. For Dolan, who wants his children and grandchildren to continue living and farming and making wine in this place, the way he farms now is about sustainability—though he has grown weary and wary of the term.

“To be able to go on doing as we are now for perpetuity,” he says, redefining the word from scratch.

Biodynamic farming may not solve all the world’s agriculture problems, but it is a new way of thinking, Dolan says, which the world needs. “Look at the pace at which things are changing. In a hundred years, we are going to need to be different people.”

Raising biodynamic foods and wines may be one important step toward true sustainability. The practice saves us water, material transport costs, and the impacts of chemical manufacturing—but it won’t save Rita the cow.