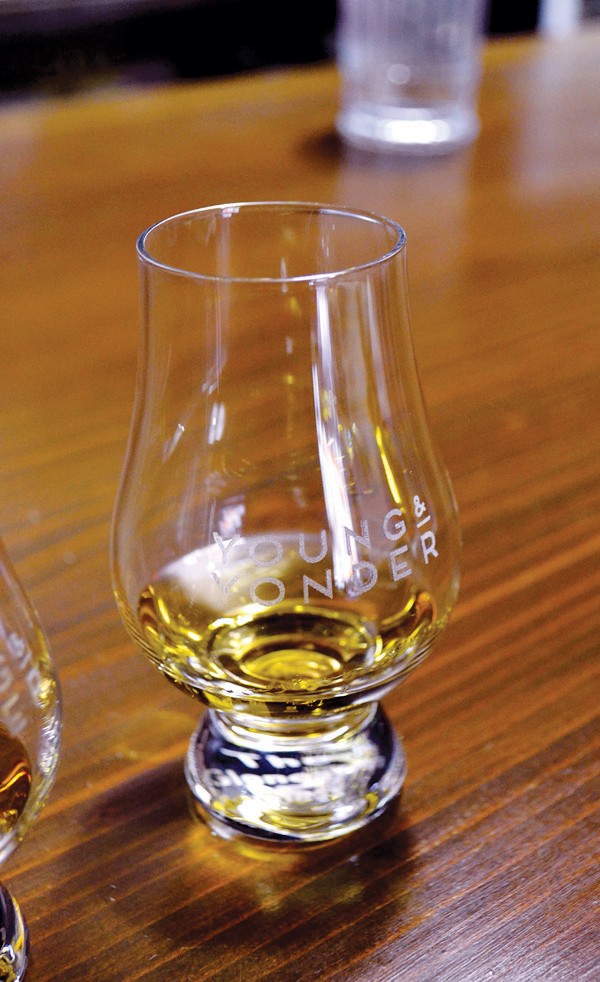 You’ve heard the one about the little retirement project that got out of hand, and somehow became a big cult Cabernet winery. And by the one, I mean the dozens of the same story, up and down wine country. But these kids in the craft spirits game, they don’t have time to wait around for all that. They jump ship young, and fire up that still yonder.

Hence the name, explains Josh Opatz, a Healdsburg native who co-founded Young & Yonder Spirits with his wife, Sarah. The pair met in San Francisco, where Josh was working in banking policy, Sarah in graphic design. But they packed up early in their careers to play around with distilling in Cloverdale in 2013. Moving to Healdsburg four years later helped with the walk-in traffic, Opatz says, even if they’re tucked away in an industrial zone. Without direct sales at the tasting room, it’d be tough to break even in the cruel world of liquor distribution, where it’s hard for a small brand to get noticed.

One way local craft distillers get noticed is by touting their “grain to glass” process, in contrast to outsourcing the base spirit. But bringing in grain-neutral spirit helps a business get up and running with less overhead, Opatz explains. Young & Yonder plays it both ways, bringing in booze for their vodka ($30) and re-distilling it six times, but making small batches of bourbon ($45) from their own mash bill.

In the capacious tasting room, good tunes play to movies set on silent and black-and-white. It’s weird how the Big Lebowski, in certain stretches, just looks like a closed circuit of a guy wandering around in his bathrobe. No White Russians here, but they mix up a menu of seasonal cocktails ($10) at the bar.

The lime vodka ($32) has a fine aroma of fresh Persian limes that banishes ethanol overtones—good choice for a vodka tonic or a Bloody Mary with subtle saucing. The H.O.B.S. gin ($35) is cardamom-forward and earthy, with juniper and citrus juicing the spicy finish.

Unusual in the North Bay craft spirits scene, the Fellows and Foragers absinthe ($50) is a naturally light green-hued spirit distilled with wormwood and anise, among other herbs. Absinthe originally gained popularity, then infamy, as the tipple of bohemians and louche café society in 19th-century France.

Fun fact: when water is poured into the spirit from the absinthe fountain, it is said to “louche,” turning cloudy. One more shot of this, and you might find yourself dreaming of a new career—impressionist artist, for one.