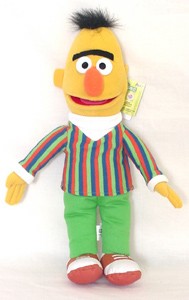 ‘Lost in the Grooves’

Best of Bert: Loving great (or crummy) music makes you cool, even if Sesame is your street.

‘Lost in the Grooves’ a field guide to forgotten greats

Record geeks cherish the moment when they encounter an album no one else knows about. This is less about one-upmanship than the thrill of discovery and the intimate connection between artist and listener, a lifeline that keeps neglected music vital and alive.

Kim Cooper and David Smay, editors of Scram magazine, understand this thoroughly, as evidenced in their recently released Lost in the Grooves: Scram’s Capricious Guide to the Music You Missed (Routledge; $19.95). The editors refer to the book as “your own portable geek,” meaning it can be a trusted friend to point obscurity-seekers in the right direction. And obscure in the context of this book is less about rarity in physical numbers than it is about rarity of appreciation.

The entries vary widely in genre–Flo and Eddie’s The World of Strawberry Shortcake shares a page with the Flesh Eaters’ A Minute to Pray, a Second to Die–but most fall into two basic categories. First, there’s “Where the hell did this band come from?” These are artists whose releases will probably never cross the loading dock of a Virgin Records Megastore. Sharp-eyed readers will note the inclusion of John Trubee and the Ugly Janitors of America’s The Communists Are Coming to Kill Us, hailed by contributor Chas Glynn as “both annoying as hell and insanely captivating.” The album was released in 1984, before Trubee left Southern California for the calmer environs of Santa Rosa, where he continues to compose and record music.

The second category is “Hey, I never heard of that Who album!” These entries appear to compose roughly half the book, creating a great space for us to reconsider purportedly substandard issues by popular bands. Pink Floyd, Dolly Parton, the Ramones, Willie Nelson, Lou Reed and Jonathan Richman all rack up mentions. Considering these folks have collectively recorded a zillion albums, it’s not surprising that a few great ones have fallen through the cracks.

I was alternately bummed and smugly pleased to spot a few albums that I already own–for instance, Neutral Milk Hotel’s In the Aeroplane over the Sea. I bet at least half of the people who purchase this book not only own that album but count it among their all-time favorites. It’s a good reminder that we’re in emotional territory here.

Despite the obvious camp appeal of some recommendations, even a casual read of the reviews will indicate that the authors wrote about these records because they honestly like them and cherish their existence. Owning cool music does not make you cool; loving great–or, as the case may be, crummy–music does.

Studded throughout the book are reprints of vintage reviews from classic early music magazines like Creem, plus sidebars of well-selected lists for those who crave to know the “Top 10 Non-Goth Albums Goths Listen To.”

(Is Duran Duran’s Rio part of that list? Hell, yes!)

Lost in the Grooves is hardly encyclopedic. You could ask 75 other rock critics to divulge their favorite overlooked records and come up with a completely different list. It’s sort of implicit that Lost in the Grooves, Vol. II is to be carried out and added to by the hands of eager crate-diggers and attic-explorers that keep the story alive and make it their own. It’s a dusty-vinyl chain letter!