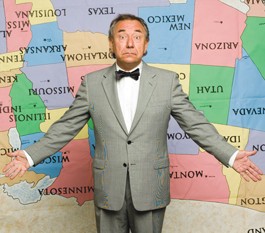 After nearly a decade of making fun of George W. Bush, political satirist Will Durst has had to go cold turkey from the big Dubya. This hasn’t been easy, since the previous president was a goldmine of inspiration for a comic known for his politically astute, tongue-tangling debunkings of clueless buffoonery in high office.

In the process of de-Bushing his routine, Durst has also been shifting the way the act is structured, dabbling in new forms of performance that are bringing him a new army of fans—and critical praise. After a successful run of his one-man show The All-American Sport of Bipartisan Bashing—with a stint off-Broadway and a bestselling book of the same name—Durst is now ready with a new one-man show, The Lieutenant Governor from the State of Confusion.

“It’s different from my standup act in that it’s—well, it’s longer,” laughs Durst, reached by phone as he travels from one South Bay comedy gig to another. “It’s still mostly jokes, of course. There’s not going to be any cathartic release at the end. It’s not about, you know, my horrible childhood or man’s inhumanity to man or anything like that. It’s mostly political jokes held together with a carefully constructed thread.

“But that’s not a bad thing, telling jokes. And it’s a really good thread. The thread is trying to find humor in semi-humorless times. I discover that uncertain times call for uncertain leaders. That’s the thread of my show.”

Durst will be testing out his new solo piece for the first time in front of an audience at a special event this weekend in Petaluma. As part of Cinnabar Theater’s recent emergence as the spot of choice for comedians to hone new material before taking it on the road, Durst is launching the 70-minute Lieutenant Governor from the State of Confusion this Friday and Saturday.

“Cinnabar’s a great theater,” says Durst, “a great place to test out new material. Who knew Petaluma would become the Bay Area’s incubator for new comedy?” The two Petaluma performances will be Durst’s warm-up, before taking the show to Washington, D.C., for a month of performances in our country’s capitol.

“I love D.C.” he says. “It’s a company town, and I speak the company business. I’m hoping to take the city by storm. I’d love to end up with a permanent theater space, maybe one in D.C. and one in San Francisco, where I could just run this show for months—or years. There’s always new material I can work into the show. I’ve constructed it so I can drop in bits and pieces from whatever’s been happening in the news that day. This show will be ‘as topical as the day’s headlines,’ as they say.”

Now that he’s had a taste of the one-man-show format, Durst is growing quite comfortable with the whole structure of the comedic solo performance piece.

“It’s long-form standup, that’s how I think of this format,” he says. “I can take my time. It means I can develop things further, do more character work. And it also means I get to perform in theaters instead of clubs. In theaters, people come to listen to words. The difference between this format and the standup format is that, while I’m still telling jokes, now I’m telling jokes to smart people sitting in comfy chairs instead of drunks sitting on bar stools.”

Durst promises that audiences will still get plenty of the kind of barbed one-liners and laser-sharp insight he’s become famous for, tackling all the newsworthy individuals and topics that pop up in the news.

“So there’s a lot of Congress stuff, some healthcare stuff and a lot of looking forward to 2012. There’s even some Sarah Palin stuff. The good thing about Sarah Palin is she refuses to go away.”There may even be a few jokes about the new president.

“Obama is tough,” Durst admits. “It’s hard to make jokes about Obama. It’s hard to even see Obama, because the halo around him is still too bright. But by saying that I can’t make fun of him, I end up making fun of him. That’s, like, my hook. It works very, very well.”