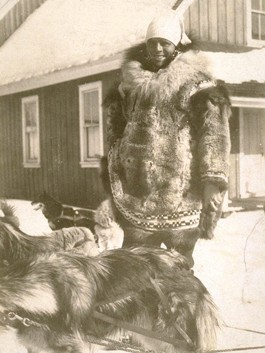 YOU CAN SEE RUSSIA FROM THERE Jack London and a favorite dog in the Yukon.

Indeed, in The Radical Jack London: Writings On War and Revolution ($24.95; University of California Press), Raskin brings London’s socialism and activism to the forefront of the discussion where before it had been mostly sidelined by, well, dog stories—albeit really good dog stories.

Yet books on literary lions litter bookstore bargain shelves all over the Bay Area. It would be easy to dismiss this as just another one, save for one thing: The Radical Jack London resonates powerfully with our contemporary political culture. And that was Raskin’s intention. Written by one revolutionary about another (Raskin was intimately and integrally involved in the battle for the American spirit during the 1960s and ’70s), Raskin brings a scholarly tone to what could be the most unique collection of Jack London’s writings yet bound in one volume, featuring detailed introductions to the texts, some of which have never before been published.

With the most historic election in American history less than a month away, looking to London—who ran for mayor of Oakland twice—may seem, at first, an obscure way to frame our modern predicament. Radical Jack gives us not only insight into London, but into the development of the American left and the attitudes and battles that helped give rise to this time of inspired possibilities.

I recently spoke with Raskin about the radical aspects of London’s life.

“Jack London was profoundly interested in American politics. He wanted to expand the opportunities of people who were marginalized and excluded,” Raskin says. “If he were around today, he would follow the election closely and get beyond what the pundits and experts have to say and get to the real issues.” Raskin adds that the problems of poverty and unemployment that London fought still exist; that the more America has moved forward, the more it has devolved when it comes to many social issues.

“Jack London didn’t like capitalism,” Raskin says. “He always voted for third party candidates. But I think he would see the Democrats as the better half of capitalism if it came down to it.”

London was a paradoxical figure. While espousing the socialist agenda, he also amassed vast land holdings in Glen Ellen, today’s Jack London State Park. And beyond being a radical and fighting for human solidarity, some of London’s writings can be seen as racist.

“American radicals have usually been more true in their words than in their deeds and lifestyle,” Raskin says. “Many times Jack London would blame the victim for their situation. Sometimes this would involve race. But when he would meet someone powerful of another race, he would admire that person.”

Raskin captures and brings a critical eye to London’s paradoxes and failings, both as a socialist and as a human being, while maintaining a focus on how integral London’s politics were to his life and writing.

The class struggles in which London immersed himself may have changed places and faces, but if anything, they’ve become deeper, more ingrained in a fragmented society that has threatened to spin out of control continues down a pathologically imperialist path. Readers will find themselves in London’s essays. Comparisons from this volume to today’s social injustices can all too readily be made, which is what takes Radical Jack from the obscure and makes it foundational to an understanding of modern American political thought. A must for London lovers, and people who really want to know about American politics—this book might even influence your vote.