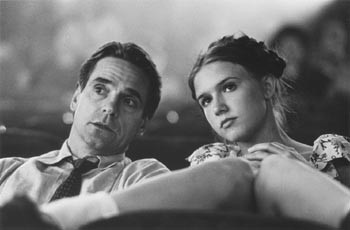 HOW DID THEY ever make a movie out of Lolita?” was the irresistible tagline in the ad campaign for the 1962 film version of Vladimir Nabo- kov’s scandalous novel about a middle-aged man’s obsession with a nymphet. That question isn’t any easier to answer in 1998.

Director Adrian Lyne’s controversial new adaptation of Lolita, starring 15-year-old Dominique Swain, was filmed in part in Petaluma. But it has only just returned to Sonoma County via a torturously winding path. The $58 million film was released in Europe in 1997, but ended up a virtual pariah in America. It had a one-week Oscar-qualifying run in July of ’98 in Beverly Hills, and then played on Showtime. Only recently has Lolita hit U.S. movie theaters in a limited release.

Lyne’s previous films, including Flashdance, Indecent Proposal, 9 1/2 Weeks, and Fatal Attraction, are fired up by technology, coarse shocks, and misogyny. He is, in fact, the archetypal director who graduated from TV commercials to feature films. In an Esquire interview about the movie, Lyne complained that his reputation as a maker of commercials “gets endlessly thrown at you … though I haven’t done a commercial in 10 years.”

It’s an astonishing statement when you consider the array of merchandise his films have sold: everything from CD players to sweatshirts torn at the neck. Indeed, many critics expected that Lyne’s Lolita would be soft-core pornography: Saddle Shoes Diaries.

As it turns out, that is not the case. The rumor that Lolita was not good enough to be released to theaters seems to have been a face-saving excuse invented by the various studios that passed on the film. (Worse than 9 1/2 Weeks, Flashdance, and Indecent Proposal? Yet all of these Lyne films were released, more’s the pity.)

Lolita is set in the United States shortly after World War II. A European professor named Humbert Humbert encounters a nubile, underaged American girl named Dolores Haze, nicknamed Lolita, and ends up both lover and in loco parentis. Lolita, no one’s idea (except Humbert’s) of a pliable nymph, is wily enough to hold her own ground. Humbert eventually loses Lolita to a shadowy figure who pursues him across the country.

Screenplay writer Stephen Schiff’s sharp, faithful adaptation of the book complements the casting. Dominique Swain makes a clever, provocative Lolita, strongly resembling Carrie Fisher in her Lolita part in Shampoo. The reliable Jeremy Irons is Humbert. And Frank Langella’s Quilty the mysterious is so well cast it’s impossible to think of an improvement; this paunchy poltroon is a weird cross between Tennessee Williams and Gore Vidal. The locations are western United States, rather than the English landscapes Stanley Kubrick tried to pass off as American in his version.

Yes, Lolita is easily Lyne’s best work, thanks to the film’s fidelity to a great novel, but it’s not much fun. If you see it without reading the book, you’ll think Lolita is a dusty classic that time has passed by. You know what you’re up against when you see an early shot of a glossy steam engine puffing through the mist–the Merchant-Ivory Express. Lyne tantalizes us with glimpses of Swain’s quite postpubescent body and then hits us with the sermon afterward. It’s an anti-sex sex movie, an approach that ties in with the sexual listlessness of most of Lyne’s films. Though there’s a lot of sex in Lyne’s work, when was it very joyous? Lust is always tangled with power or money in his movies. Even the comic kinkiness of 9 1/2 Weeks was a power exchange: Mickey Rourke feeding his blindfolded lover, Kim Basinger, mystery foods, as if he were initiating her into a fraternity.

By zeroing in on the power struggle between Humbert and Lolita, Lyne has rephrased an extremely funny book as plain tragedy. He identified the film noir elements in the book, but then pursued them single-mindedly. The locations avoid ’50s exuberance in favor of Lyne’s typical clinical blue-white lighting and clammy mist.

NABOKOV once wrote of Lolita that he was advised by an editor to change his novel to a Gothic, with “gaunt, arid surroundings, all this set forth in short, strong, ‘realistic’ sentences (‘He acts crazy. We all act crazy, I guess. I guess God acts crazy. Etc.’).”

Aridness and gauntness mark this new Lolita, fattened with some juicy bits by Swain, Irons, and Langella. Lyne’s Lolita is a brave film, yes, but a glum one, badly missing the sophistication of Kubrick’s 1962 version, and falling far shy of the original novel.

Nabokov’s book was written in 1953 and published by a small French press, like its only rival as the masterpiece of 20th-century English literature: James Joyce’s Ulysses. Also like Ulysses, Lolita was banned, even in Paris. The book was brought to America in 19 at children must try to fight their way through every day.

The novel does not lack a moral dimension. Decades before incest victims by the legions trouped into the studios of Jenny Jone, Nabokov understood what sex with an adult usually does to a child. It’s not the sex itself, not the robbery of some sort of vague innocence. In a soaring passage in which he remembers watching children play, Humbert laments as his final, bitterest regret that he took Lolita’s childhood away. Through the misuse of his power over her, Humbert really is a monster who has to live with his shame until the day he dies. Moral enough for William Bennett, really.

Still, by taking on Lolita, Lyne should have known there is no surer path to censorship than to discuss the sexual relations of children and adults. His detractors are worried about his subject matter, not his aesthetics.

In fact, there are those who point to a new film of Lolita as further evidence of our moral decline. Of course, legislating against pigtailed nude models on the Internet is easier than dealing with deeply underfunded schools and the lack of medical care or nutrition. It’s easier to attack the symbolic degradation of children than it is to do something about the real world–a world that children must try to fight their way through every day.