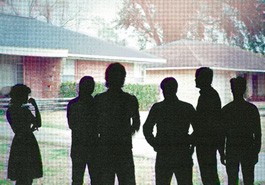 'The Suburbs,' a new album from Arcade Fire

The new Arcade Fire release, due out this Tuesday, is a concept album about the suburbs, using as its muse the tract homes, shopping malls and bad neighborhood planning that make up much of America. It is an intensely anticipated record, not least because two previous Arcade Fire albums brilliantly lived up to their themes, musically—the ascending majesty of Funeral, the eerie paranoia of Neon Bible. And indeed, the band delivers on the theme again: listening to The Suburbs is almost as boring as actually living in the suburbs themselves.

The trademark elements that once built towers of bombast—torrential drums, group “ooaah-ooaah-ooaahs,” fervent strings, Win Butler’s quaking, confessional voice—are all here, but they don’t rise much taller than a ranch-style bungalow. In a contender for most underwhelming opening album track of the year, “The Suburbs” clops around a Floyd Cramer&–style piano figure like a donkey on its way to the glue factory as Butler ho-hums about leaving town with a malaise that permeates the whole album. In the quirky “Modern Man”—taken at a 9/8 time signature—Butler admits, “I feel like I’m losing the feeling,” while themes of wasted hours, self-doubt, packing it in, losing touch and praying to God dot the other songs like fading freeway billboards.

Tempo-wise, the band gains speed from downstroked quarter-notes (“Ready to Start”) to eighth-notes (standout “Empty Room”) to danceable sixteenth-notes (“Sprawl II (Mountains Beyond Mountains),” which revels in the nighttime redemption of midnight makeout sessions and getting away from the cops on bikes). But there’s a post-jaded element that drags, especially on “Suburban War.” Halfway through, the song breaks into a faster tempo, but it’s entirely unlike the joyful dance-break release of Funeral‘s “Wake Up.” Instead, the toms pound dreadfully, the violins ooze drama and the mermaid voices chime in some vague symbol of meaning while Butler complains that his old friends don’t know him anymore.

Much will be made of this record’s theme in the larger media, and to be gracious, the band sticks with it for the entire hour-long album. But despite its jabs at millionaires, private prisons, strip malls and sprawl, something is amiss. The band doesn’t appear lazy so much as shellshocked—as if thinking about suburbia for an extended period of time produced songs that sound stunned, instead of stunning.

August 9: Huey Lewis in conversation with Joan Ryan at 142...