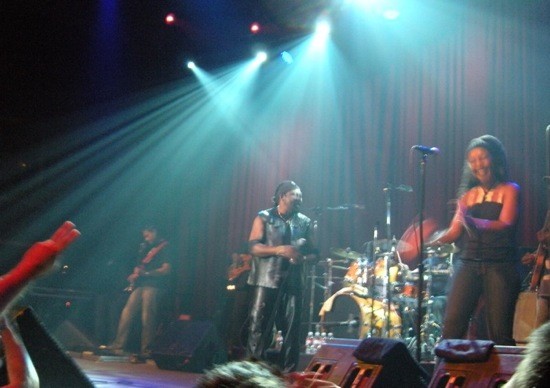 A couple days before my first Toots and the Maytals concert experience, a friend told me “when you see Toots in concert, you forget he has so many good songs; you hear a song and you’re like, ‘oh yeah!'”. For me, this moment occurred halfway through the show, when the 63-year-old Jamaican legend and his crack band launched into “Sweet and Dandy“, the divine Harder They Come soundtrack classic. Needless to say, I – and the sold-out, packed-to-the-rafters, all-ages crowd – went apeshit. Thus went the entire brilliant show, which kicked off with the apt “Do the Reggay” and the soulful and (synth) horn-heavy “Pomps and Pride“, before leading into the especially timely “Time Tough“. Though the group hasn’t been “The Maytals” since 1981, the concert was a testament to the enduring talent of Mr. Toots Hibbert, from his rhythmic acoustic guitar mastery in tracks like 2007’s “Don’t Bother Me” to his pristine voice, which still packs enough gruff (an incendiary “Funky Kingston“) and grace (a spot-on rendition of Otis Redding’s “I’ve Got Dreams to Remember“) to record those classics all over again, and wielded an endless series of Freddie Mercury-worthy call-and-response moments. While he didn’t move around onstage much, Hibbert’s stage presence was enthralling, with a formidable positive energy that kept him smiling widely and professing love to the crowd non-stop throughout the 90-minute performance. A touching moment was when Hibbert – who is widely credited with coining the term “reggae”– invited a boy/girl middle-school band onstage during the encore. They were too shy to approach the mic, but Hibbert beamed like a proud grandfather when he announced “They play reggae music!”, which was met with warm applause. Thankfully, so does Toots.––David Sason

For more info on some of the most SOULFUL, life-affirming music ever made, visit www.tootsandthemaytals.com.

[You got me feeling?]

Encore: I’ve Got Dreams to Remember

Love Gonna Walk Out on Me

David Sason
Previous articleThe New Tom Waits Live Album is Kinda Unnecessary
Next articleCurrently, I am Rapping With My Associates, the Junior Mafia