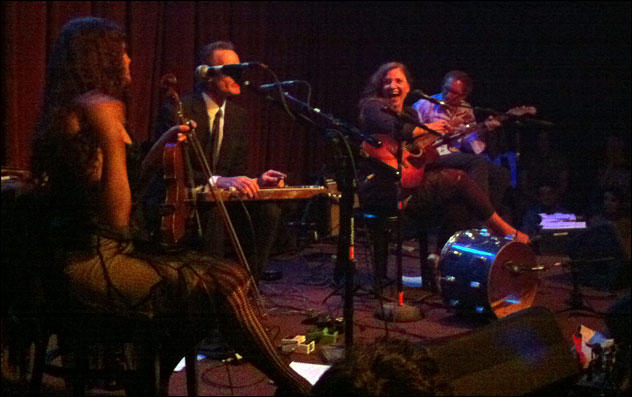 Jolie Holland’s voice is an old wooden roller coaster; a reciprocating saw; a warped steel beam that stopped holding up the building years ago. It falls behind, it jets diagonally. It soars above and below, limboing through the weave of a song instead of along its linear plane. It has, in moments, transformed a room.
At just $10 a ticket and with a strong local following, her show last night was filled. Moving to the front, away from the chattering bar crowd, was the thing to do. Also, up front, Holland and her band—Carey Lamprecht on violin; Keith Cary on mandolin, viola and lap steel; and Henry Nagle on guitar—played sitting down. It helped to be close. It felt close, and right, and Holland was visibly touched by the warmth of the crowd.
Holland played mostly material from her new album, Pint of Blood, but if it didn’t sound familiar, that’s intentional: she has a way of trying out new roadmaps each time she ventures into a melody. After openers “All Those Girls” and “Gold & Yellow,” Holland played loose with songs like “June,” while boldly inhabiting “Alley Flower” with a forceful, harrowing voice.
Musicology runs in Holland’s blood, evidenced by her choice of covers and her frequent referencing of those that came before her. “My dad was teenage hippies with Townes van Zandt,” Holland said, talking about how he’d worked on a studio for Jimi Hendrix and stayed at the Chelsea Hotel, then launched into “Rex’s Blues.” Likewise, Holland raised a glass to the recently deceased Hubert Sumlin, Howlin’ Wolf’s guitarist, from whom she learned to “turn the amp up loud, and play real quiet.”
After a fantastic “Mexico City,” the set veered into Escondida territory—the album she recorded at Tom Waits’ behest just over the hill from Hopmonk, in Forestville. “Amen” was followed by a lengthy ghost story, and then “Goodbye California” and “Old Fashioned Morphine” closed the set thrillingly. “I have vinyl,” Holland announced, “and I have these useless little pieces of garbage called CDs,” inviting the audience on the stage after the show. A half hour later, there was still a line of people waiting to talk to her, ask her to sign their albums and take pictures.

Next ArticleSo Where Does Petaluma Councilmember Chris Albertson Live, Really?