By Nicolas Grizzle
May 11, 2013
Share
Facebook
Twitter
Linkedin
WhatsApp
Email
Print
BottleRock is here. And we can only hope it returns.
Arriving late on Friday, I caught the last half of Andrew Bird’s set. I’ve always thought he would be better in a concert hall than a festival, and I still think that. He was good, but there’s something about the violin and looper pedal that runs counter to the spirit of a big rock show. On the next stage, the Shins, who were rumored to have played a warm-up show the night before at the Phoenix Theater in Petaluma to about 15 people, were tight and professional. They’re about as surgically precise as a band can be, sounding just like the record. Almost too perfect, but very good. At the same time, Blues Traveler started tearing into their set. I caught “Run Around” and stayed for a couple songs because, damn, that John Popper can blow! I haven’t heard if he and Charlie Musslewhite, who is also playing the festival, are doing or have done a harmonica duet. I don’t know if the world could handle it.

The set up was similar to Outside Lands, but without the one-mile trek between stages. This meant that no matter where you stood, there was music playing. Not that lines were a big problem (the longest I waited for anything was about 10 minutes), but it would suck to know you’re missing the main reason for the $130 ticket because there is not an adequate number of beer stations. The addition of comedy to the festival was tough, making yet another thing to choose from to watch in addition to the great bands. But the comedy headliner each night (last night was Jim Bruer) started at 10:15, just after the last band. Not sure if that meant more or people would stick around because the rock show was over. But there were lines for each of the other comedians throughout the day.

Before the Flaming Lips took the stage (they were the last act of the second stage), it was time to refuel. There was festival food, but this being Napa, there was so much more. Cochon Volant BBQ actually ran out of buns for its pork sandwich, but the line did not diminish upon this announcement. They served instead a plate of just meat and coleslaw, which was incredible. The deep smoke flavor went nicely with a Sierra Nevada fresh-hop Harvest brew, another culinary upgrade from usual festival fare. Tons of restaurants, including Morimoto (of Iron Chef fame), were dishing up fancy foods. And with what seemed like hundreds of wineries on hand with popup tents and tasting lounges, it felt like a good representation of the California culinary scene. Imagine coming from Philadelphia or New Mexico to a festival that not only cares about food but almost worships it like a groupie does a rock band. It made for a good vibe. 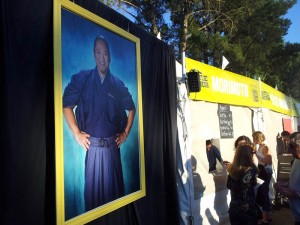 Scarfing down my pork and ‘slaw, I got pretty much front-and-center to see the Flaming Lips. I’d seen them at Treasure Island a few years ago as the headlining act, and they raised the bar for me for festival acts. Frontman Wayne Coyne and company did not disappoint. In fact, they raised the bar yet again. Wayne, in a blue polyester suit, stood atop his lumpy, space-age, shiny bubble pulpit with a baby doll in the crook of his arm, cooing an playing with it while the band rocked around him. I’m glad he didn’t do anything crazy like throw it into the audience or rip its arm off or something. It gave that baby a symbolism it would have otherwise not held. The stage faced the setting sun, meaning the band got to watch a beautiful Napa sunset while the crowd didn’t have to squint at sun spots (good planning, BottleRock!). Coyne remarked how beautiful it was, and said how cool it would be if the sun set and then rose again immediately after (this ain’t Alaska, Wayne). He also praised the festival and thanked “whoever got us to play here” because it was a good thing to be a part of. As it got darker, the light show became more pronounced. Lasers, smoke, a truss of lights that moved down from the sky to just above Coyne’s head and shot strobe lights and huge flood lights across the crowd. Being directly in the center, I was blown away. You’ve seen people put hands on their head in that oh-my-god-what-am-I-even-seeing-right-now move of disbelief? That was me several times during this performance. Luckily, there are photos to help explain, because words are hard sometimes. The Flaming Lips received a well-deserved ovation, prompting a real encore (the lights had even come back on already). All this while the headliners, the Black Keys were about half an hour into their set already. People stayed for the Flaming Lips encore, and almost demanded a second encore.

The Black Keys were good. Even had a full band for the second half of their set. But if someone could explain why this is the end-all-be-all of bands right now, I’d love to listen. They rock, yeah, I dig that. But Blues Traveler rocks, too, though I suppose they had their time in the sun as well. Leaving the festival was relatively uncomplicated. There were plenty of volunteers directing the masses to the shuttle locations, and five shuttles filled and left at one time, so there wasn’t much of a wait. Upon arriving at the, ahem, parking lot, it was a different story. I hope everyone loaded their car’s location into Google Maps as a “favorite location,” because with no lights whatsoever and no volunteers directing the crowd, finding your car out of 10,000 in five separate lots would be tough. I parked at the back of a lot, and was really hoping I remembered correctly which one because it’s a 15-minute walk back to the dropoff point, and who knows how long from there to the other lots. I was right, and left with little delay.


One more point is the sound. It was excellent, but could have been a little louder on the main stage, especially for the Black Keys. Maybe this was a city ordinance thing, but it’s a rock show. Give it some gas! 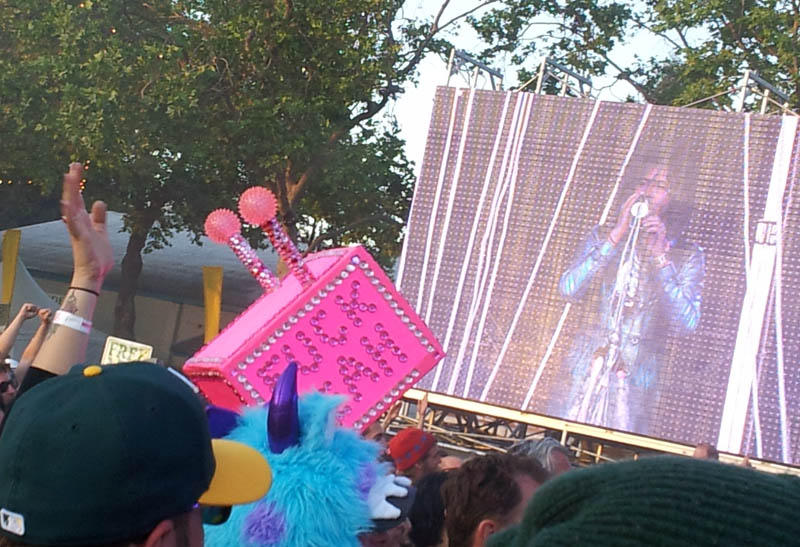