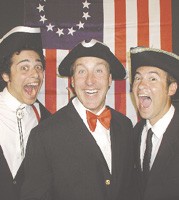 A couple of weeks ago, my friend Roger McBain, a theater critic from Evansville, Ind., sent out an e-mail to a loosely associated group of theater writers in which he posed an interesting question. Roger had recently seen a production of The Search for Signs of Intelligent Life in the Universe, the one-woman show written by Jane Wagner and made famous by Lily Tomlin in 1991. But this revamped production eliminated several characters from the original script and cut a number of lines, apparently in an effort to reduce the show’s running time and to de-emphasize dated content. The result, according to Roger, was a play with a less powerful climax and a much different vibe than the original show.

Ultimately the question he asked us to think about was this: How much latitude and freedom should a director really have in cutting or adapting a show?

It’s a question I think about a lot. In addition to the usual Shakespeare adaptations that set Taming of the Shrew in the Wild West or rethink Macbeth as a fairy-tale version of a postapocalypse thriller, I frequently encounter shows in which the director has made significant changes to the script. Last April, Actors Theatre in Santa Rosa presented an exhilarating production of Michele Lowe’s Smell of the Kill. Directed by David Lear, it’s the story of three women who, simply put, kill their husbands.

Though most members of the audience were probably unaware of it, Lear and his cast made several changes to Lowe’s original script, excising a number of lines, completely dropping the final interrogation scene and adding a new ending in which the characters huddle together singing “Hush, Little Baby.”

In my opinion, these changes made the show stronger and tighter and allowed for a more intimate and powerful climax. But the question still stands: Are changes that clearly deviate from the author’s original vision within the acceptable role of a director? In the flurry of e-mails that resulted from Roger’s original query, one critic suggested that changes in Shakespeare (especially changes that make the plays shorter) are almost always welcome, but that changes in the work of living authors are unnecessary and unforgivable.

I hold that it depends upon the production and the changes made in that specific case; some changes make a show worse, but some make it better.

Which brings us to the current production of The Complete History of America (abridged), which opened the Sebastopol Shakespeare Festival June 30. The play is part of a series of comedies by Reed Martin, Austin Tichenor and Adam Long that take scissors to everything from the Shakespeare to the Bible to the great books. In turn, the abridged plays themselves are famous for being tinkered with and switched around by companies staging them.

According to Dodds Delzell, one of the three actors bringing life to the Complete History‘s uproarious romp through American lore and legend, the new outdoor production carries a number of changes and updates–mainly those that bring the piece up to date with references to George W. Bush, Osama bin Laden and Iraq. Notably, those changes were supplied by one of the authors, Reed Martin, a resident of Sonoma.

“There’s always a little bit of dramatic license done in plays,” says Delzell, “and that’s appropriate, but it’s nice when the author of the play is involved so you know you’re staying with the tone that he or she originally intended.”

According to director Jennifer King, a good play shouldn’t need tinkering or changes to its script or setting.

“History is a very smart text and it just doesn’t need much in the way of creative changes,” she says. “The updates Reed gave us mainly serve to bring the piece up to date. For the most part, I think good work should be respected and, except when necessary, be presented intact.”

The final word goes to Joe Rozmiarek of the Honolulu Advertiser, who believes that a director should be held to artistic standards only, not legalistic or ethical ones. With that in mind, he writes, “The response to ‘How much is a director allowed to cut a play?’ ought to be ‘As much as he or she can successfully get away with.'”