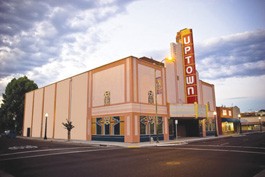 Let Me Off Uptown

After 10 years of work, the Uptown Theatre miraculously reopens next month

“Oh my God, it’s really going to be just so gorgeous,” says Sheila Groves-Tracey. “It’s the kind of place where you’re going to walk in, and you just go, ‘Wow.'”

The place is Napa’s Uptown Theatre, one of the Bay Area’s beautiful 1930s theaters blessed with the kind of love that only renovation money can bring. Thanks to property owner George Altamura and an influx of cash from Napa County resident Francis Ford Coppola, the 860-capacity theater is a jewel of a restoration, up there with the recent overhaul of the Fox Theater in Oakland. And like the Fox, it’s graduated from movies to live music, something that Groves-Tracey, the Uptown’s new executive director, knows a thing or two about, having booked the Mystic Theatre for the last 15 years.

The important stuff: The seats are fixed to the floor but people will be encouraged to stand up and dance. The sound system is “brand-new, top-of-the-line, digital this, digital that.” The talent booker, Elizabeth Rush, has been an agent at William Morris. All shows are 21 and over, but with the hopeful addition of a kitchen, the shows might one day be all-ages. (It’s a weird permit workaround; “We definitely want to have all-ages if we can,” says Groves-Tracey.) Returning to the theater’s roots by showing movies would have to involve bringing in mobile projection equipment—tricky, but not impossible.

Tickets for the shows are on sale now. “People are so excited about this place opening,” Groves-Tracy says. “Everybody has their stories, from 1937 on, from all the movies they saw and the time they made out with so-and-so and the time they got engaged at that one movie. It’s rewarding to read those emails and realize all this work is worth it. It matters. It matters.”