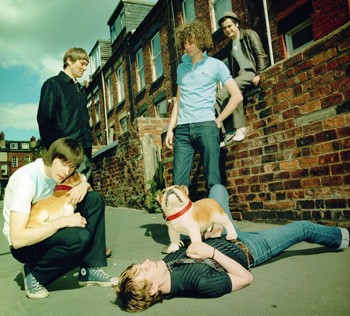 New Guys Want to Sound Old: The Kaiser Chiefs stayed as moodily peppy as their predecessors this year.

What music taught me this year

Reflecting on the new music of 2005 is a dilemma. I’ve been seeking meaning from this year’s rock and pop almost like a student seeks answers from a teacher. Headlines, trends and subgenres seem hidden and blurred, but I keep chasing rock/pop’s details, because I know that at the end of the rainbow there’s a fountain of insight.

In 2005, rock/pop music has been a kind teacher. I’ve learned the following lessons:

Lesson No. 1: Old guys want to sound new. This was a watershed year for dormant veterans. Acts like John Prine, Brian Eno, Stephen Stills, Tracy Chapman and Bob Mould have re-emerged for one more stab at the spotlight. Robert Plant’s Mighty Rearranger (Sanctuary) stands out. Plant doesn’t sound like Led Zeppelin, but like some guy who has listened to a shitload of Zeppelin and other millennial folk music.

Two amusing old-guy-tries-again discs included Paul Anka’s Rock Swings (Centaurus) and Neil Diamond’s 12 songs (American). These great pop songwriters act like they never went away. Anka is 10 years too late for the swing revival, but his big band reinventions of ’80s and ’90s rock classics are surprisingly genuine and astute–there’s no irony when he finds the groove and mood in Soundgarden’s “Black Hole Sun.” Diamond boldly sought the hip status of a Rick Rubin–mdash;produced record, modeled on the stark intimacy of Rubin’s landmark work with Johnny Cash. Instead, it’s Rubin’s most boring disc.

Lesson No. 2: New guys want to sound old. Sounding old was also cool this year. The hip ’80s retro scene sounded fuller and sharper than the prefab ’80s themselves. Bands like the Killers and Kaiser Chiefs had hit records as peppy and moody as their Euro pop-punk predecessors. Roots-rock also summoned the past; Ryan Adams’ Jacksonville City Nights (Lost Highway) is the best George Jones disc in 30 years, while neo-folkie Iron & Wine flirts with the Dylan-goes-electric model by teaming with indie rockers Calexico on In the Reins (Overcoat).

Lesson No. 3: Indie-rock snobbery is irrelevant. Large and small labels alike are an aging paradigm of distribution. The real indie rock of our day is the fertile field of the Internet, where aspiring artists promote their own careers and share self-produced music files. The aesthetic difference among conventional labels is nil; Spoon’s Gimme Fiction on top indie label Megre is no more edgy and compelling than Blame It on the Youth, the Warner Brothers debut by the Sun.

Lesson No. 5: I almost liked prog-rock again. In the mid-’70s, I briefly loved the elaborate music of Yes and Emerson Lake & Palmer. Then I started loving the Clash and the Ramones after realizing I didn’t want expansive musical vistas, I wanted explosive emotional truths. This year, I found a sprawling prog-rock record that excited me again: Frances the Mute (Universal) by the Mars Volta. But it isn’t simply their obtuse jams and convoluted ambiance that catches my ear. It’s partly their dynamic, unraveling punk passion; moreover, it’s the punkness of their deliberate anti-iShuffle tactics. The “tracks” on the disc don’t correspond to the musical movements at all, forcing the record to be heard as a whole.

But the real prog-rock of the year is orchestral pop. This prominent strain of Pet Sounds–mdash;influenced modern rock emphasizes detailed micro-arrangements and delicate recording subtleties. Sufjan Stevens led this dreamy field this year with his uneasy chamber-pop stories on Illinois (Asthmatic Kitty). But orchestral pop’s emphasis on pure musical detail more often yields middle-of-the-road soundtrack hits than powerful rock statements. Where old prog got lost in too much composition, new prog gets lost in too much cleverness.

One last thing I’ve learned from 2005 music is that I’ll probably still decline to buy Pet Sounds in 2006.