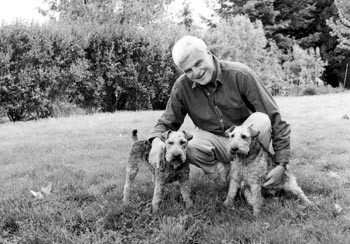 Pet project: Leroy Aarons has seen his tragic account of the suicide of a gay young man touch many lives. Now Prayers for Bobby is primed for prime time.

FIFTEEN YEARS have passed since a troubled 20-year-old man named Bobby Griffith–tortured by years of self-hatred and futile attempts to “cure” his homosexuality–chose to end his life, leaping from a freeway overpass into the path of the speeding traffic below. Bobby’s suicide, tragic though it was, served to shake his fundamentalist mother out of her staunchly Christian faith and launched Mary Griffith into a new life as a determined gay rights advocate. Indeed, the circumstances of this young man’s life and death have gone on to touch, to enlighten, and to invigorate the passions of thousands of people.

Two years ago, Sebastopol author Leroy Aarons published Prayers for Bobby: A Mother’s Coming to Terms with the Suicide of Her Gay Son (HarperSanFrancisco), a riveting bestseller, now in paperback, that sold over 20,000 copies and in turn inspired composer Jay Kawarsky to set the story to music. Prayers for Bobby–a soaring choral work that brings alive the boy’s heartrending journal entries–was first performed by the Gay and Lesbian Chorus of San Jose, and has since been staged over a dozen times around the world. In short, the message of Bobby Griffith’s life refuses to go away.

Now a movie is planned. Last month NBC announced that Oscar-winning actress Susan Sarandon will produce a made-for-TV version of Prayers for Bobby, an event that could potentially reach tens of millions of people.

“It’s a big leap forward,” Aarons says. “It’s a big step for this project that has been bouncing around a bit the last couple of years.” Since publication of the book, there have been numerous nibbles from various studios; according to Aarons, Walt Disney Studios held the film rights for some time before finally abandoning the project. When Daniel Sladek, a young gay producer in Hollywood, approached Sarandon, she agreed to produce–and may commit to playing Mary Griffith once she sees a finished script–and NBC gave the project thumbs up soon after. No start date has yet been announced.

Aarons, a former executive editor of the Oakland Tribune and the founder of the National Lesbian and Gay Journalists Association, spent three and a half years writing the book, and is encouraged to see that awareness of Bobby Griffith’s struggle–and the underlying problem of evangelists insisting that God can turn gays into straights through vigilant prayer–has grown so significantly.

“It kind of has a life of its own,” he says of Bobby’s story. “I’m still getting letters and e-mails about the book, though we haven’t actively promoted it in two years. There always seems to be something popping up about it.”

Aarons, who first read about Bobby Griffith in a newspaper article marking the 20-year anniversary of the American gay rights movement, is sitting at the dining room table of the spacious home he shares with his partner of 17 years.

“I found Bobby’s story to be incredibly compelling and touching,” he says. “At the same time I first heard about him, things were coming together in my own life. I’d been closeted professionally for most of my career, was in the process of coming out, and was settling a lot of personal issues.”

Years later, after taking an early retirement from the Tribune, and eager to write a book, he called Mary Griffith, a longtime resident of Walnut Creek, and began a series of interviews with her that resulted in Prayers for Bobby

Since writing Prayers, the 64-year old journalist has kept himself busy: He’s on the board of directors of We the People, Sonoma County’s gay and lesbian newspaper, he’s doing groundwork on a proposed University of California course on gay and lesbian issues in the media, and has completed the libretto for an opera on the relationship between Thomas Jefferson and his slave mistress. He’s currently searching for a composer.

All the while, he’s been keeping his eyes open.

Aarons has seen that stories such as Bobby’s–gay and lesbian youths struggling to be accepted by family and peers–are becoming increasingly common. This change is owing to the efforts of activists like Mary Griffith, a slowly building public awareness of gay issues, and mainstream media that are gradually learning to report on gays and related themes with the same sensitivity and balance required when covering ethnic and minority subjects. Predictably, the religious right has responded by becoming increasingly vocal in its condemnation of homosexuality.

“Since Bobby’s death, the right-wing religious movement in this country has, if anything, intensified its efforts to campaign against gays,” Aarons affirms. “The more the public learns and the more progress is made by the gay movement, the more vociferous is the opposition.”

He points to a recent religious campaign that has placed full-page ads in newspapers and magazines, offering intensive programs by which gays and lesbians can be successfully “converted” to heterosexuality.

“These ads really articulate an issue that is at the heart of the book,” he says. “If anybody tried, through Christianity and the Bible, to convert themselves to being heterosexual, it was Bobby Griffith. He gave it his all for four years–and of course it finally ended tragically.”

“I’m another person who–though not through religion–spent 25 years of his life trying to go straight, without success and with a lot of personal pain,” Aarons says. “I’m not ready to make the argument that it’s 100 percent biological and preordained, but whatever the components are, it’s a permanent disposition. It’s clear to me that this is who I am; it’s part of my fiber and fabric, and it always will be.”

With a shake of his head, he adds, “I’ve seen these segments on documentaries, where parents say they’d rather have their children live celibate lives, absent of any familial love, than for them to be homosexual. I don’t know what kind of Christianity–or what kind of humanity–that is.”

‘Wonder of the World’