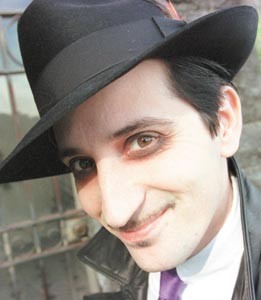 Lee Press-On and the Nails

Up from the Dead

THE GRAVEYARD air is stinging, crisp, and cold. The crumbling cemetery sits waiting for a funeral in the misty winter afternoon light, while the faint chimes of church bells rise in the distance and Mr. Lee Press-On dances happily on his own grave.

OK, so it’s technically not Lee Press-On’s grave. In truth, he barely knows the occupant. Or occupants. But the enormous crypt he’s now strutting his stuff on does bear his name in big, bold, stone-carved letters. It glares down from the top of the ornate, 15-foot granite tomb.

“I stumbled upon this crypt a few years ago,” remarks Press-On, with a wicked grin that makes his pencil-thin mustache arc up in a wide V. “I was taking a little stroll one day through the graveyard. I saw my name up here and thought, ‘Cool. That could be me.’ ”

Such thoughts would unsettle most mere mortals, but this one only makes Press-On giddy. Really giddy. Without warning, the little man lets loose a sweet, spontaneous burst of jitterbugging.

PRESS-ON is the whimsical leader and fierce driving force behind Lee Press-On and the Nails. That’s the goth-tinged Bay Area swing band that has been raising eyebrows and setting toes to tapping for about six years now.

Arriving on the scene in 1995, just before the swing craze that gave them a nice boost in popularity, Lee Press-On and the Nails–known to their fans as LPN–is arguably the most theatrical swing band on the scene, supporting a solid repertoire of authentically played swing tunes with an on-stage carnival of macabre merriment that has included choreographed fist fights and zoot-suited horn players who spit blood.

Then there’s the band leader himself. A consummate showman, he’s possessed of incredible stores of energy, bouncing, dancing, and skipping around like “some coked-out zombie” (in Lee’s words).

A master of improvisation, Press-On revels in his back-and-forth exchanges with the fans and fellow band members. He once invited the entire audience onstage, where he sat them down and told them a story.

At LPN’s recent appearance at Petaluma’s Mystic Theater, he snatched a European patron’s video camera and, after shooting in-your-face close-ups of the band, leaned in close to shout, “Hello! Hello! You over there in Europe. It’s Lee Press-On. Over here in A-mer-i-caaaaaa!”

Asked where he gets all that energy, he says, “I just really want people to get their money’s worth.”

Press-On–whose band opens for Big Bad Voodoo Daddy Jan. 12 at the Luther Burbank Center–often takes the stage in a blast of smoke, routinely popping out of a coffin with a scream before stalking up to the mike to “hiedie hiedie hie” his way through “The Ghost of Smokey Joe” or a swing version of “Ghost Riders in the Sky.”

The band’s latest CD–Playing Dirty: LPN Live at the Derby–nicely captures the intensity of these shenanigans and shows Press-On’s musical versatility as he alternates between his scorching vocals and lively vibraphone playing.

But staying alive hasn’t been easy. Over the years, a revolving-door roster of musicians has hurt LPN a bit, frequently forcing the big band to re-establish its musical unity, while other swing acts have become household names. Moreover, the size of the band, currently a 10-piece ensemble, makes it expensive to operate.

Then there’s the slow decline in the swing fever, which has caused many bands to quit. Some superstar swing groups like the Cherry Poppin’ Daddies–whose latest CD was more punk than swing–have begun to rethink their dependence on the sound that made them famous. Though such bands are still getting gigs, the audiences–many of them hard-core swing dancers–have been much smaller now that the fad-hoppers have moved on.

“November,” Press-On admits with a wince, “was a pretty thin month.” But he insists he’s not worried.

“Our culture builds things up to Herculean proportions, and then delights in tearing them down,” he says. “I could care less whether I’m hip or not, though being hip was fun while it lasted. We’re not in this for the money, though that does put bread on the table and everything. We do this ’cause we love it. And having fewer people show up won’t stop us from loving it.”

But he deflects most personal questions, preferring to keep his real life in the background, if not completely, um, buried. A pack of rabid wolves couldn’t drag his original name out of him; though offstage, Presley does get away with calling him Leland. Press-On will admit to being 35, but only as the setup to a typically dark joke.

“When John Belushi was my age,” he says, “he’d been dead two years.”

He also reluctantly confesses to having other alter egos; for instance, he’s played the part of Edgar Allen Poe at the San Francisco Dickens’ Christmas Fair for the last several years.

On the other hand, when it comes to his relationship with his wife, Press-On can’t keep himself from gushing a bit.

“She’s wonderful,” he says of Presley, whom he married just over four years ago and with whom he lives in San Rafael. One of their wedding gifts was a coffin they use as a coffee table. It’s the same coffin Lee leaps out of during his shows.

“Our relationship onstage–the whole affectionate Nick and Nora Charles thing–is pretty much the way we are,” Press-On says. “Couples come up to us after shows and say, ‘You two have been so inspirational to us in our relationship.’ We love that.”

It’s Monday night in Rohnert Park, and Press-On is at the controls of the local public access station for his weekly two-hour radio show–a mix of swing music, comedy bits, show tunes, and unexpected comments.

“I’ve had an ear infection,” he confesses to his listeners. “So if you are the type who is squeamish, you might want to turn off the radio, because I’ve discovered that my ear can actually transmit noise.” With that, he places his ear to the microphone, pinches his nose, and blows.

A raspy, high-pitched squeak emits from his ear.

“I’m going to have that looked at tomorrow,” he announces, and returns to the music, playing “Big Boss Lee” by the Royal Crown Review, followed by a Hammond organ rendition of “Let it Snow” by Eddie Dunstedder.

Press-On has been doing the Graveyard Shift gratis for the last two years.

“It’s a shameless way to pimp the band,” he says, dancing and snapping along to the music, before stopping to massage his ear.

“Maybe I shouldn’t have done that ear thing,” he remarks. “I can’t hear a damn thing out of it now.”

Between songs, Press-On talks about why he loves swing. “Hey! This is the happiest music,” he says.

“Originally, swing came at a time when the world really needed something,” he explains. “The Great Depression was raging. People needed to get away from their troubles, and swing helped, even though the politicians at the time thought it was a morally corruptive form of music. That’s another thing I like about it. People used to think it was evil.”

Though swing faded after the ’40s, it never completely went away. There have been a steady number of big-band stations and ballroom swing-dance clubs ever since. The upsurge of swing among young people came in the mid-90s, edged forward by the cult-film Swing Kids. It was pushed into hyperdrive by, among other things, that infamous “Jump, Jive, and Wail” Gap commercial on TV. Suddenly swing was hot.

Now it’s not. In fact, isn’t it officially dead?

“Dying is not the same as dead,” Press-On says, “though locally it might appear that way. We actually have a bigger following in L.A. than we do around here. Swing is very popular in L.A. But it’s true. A lot of clubs are shying away from swing. Even so, swing is not going to vanish into obscurity. Swing was here before the craze, and swing will be around after.”

“NO MATTER what happens with swing, as a musical fad, Lee Press-On has a chance to survive because his act is more than swing. It’s a total show.”

This endorsement comes from Santa Rosa’s David, from the popular swing-dance teaching team known as David and Sirkl. The dynamic duo has been teaching swing lessons since the height of the movement and, says David, has never been busier than it is now. “We’re actually glad that a lot of the fad people have dropped away,” he says. “What’s left are the people who really care about this music.”

David, it turns out, first caught the swing bug when a friend took him to an LPN show. “It literally changed my life,” he says. “Lee knows how to put on a show that entertains the people who stay in their seats, and also gives a good time to the people who come to dance.”

According to David, he and Sirkl have around 800 students who are active North Bay swingers, traveling to whatever club has the music that night. “When people tell me swing is dead, I laugh,” he says. “If it’s dead, then what are we doing every night?”

Or, in the words of LPN fan Lora Lorden, minutes after leaving the floor during the Mystic show, “If swing is dead, I just got bruises on my shins from all those ghosts out on the dance floor.”

“‘GHOSTS ON the dance floor.’ I like that image,” says Press-On, concluding his tour of his favorite graveyard. Returning to the delightful LEE crypt, Press-On is moved to consider what kind of epitaph he might want on his own tombstone.

What about “Here lies Lee Press-On. NOW you can say swing is dead”?

Press-On laughs, dancing out a few final steps in front of the tomb. “Hey, I like that,” he says “It’s perfect.”