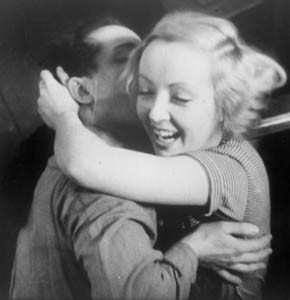 IN GREEK MYTH, Atalanta was a girl who “could outrun all human kind/ or girls or men,” as the poet Ovid describes her. When it came time for her to marry, she made a bargain with her suitors: each one could challenge her to a race. If one of them won, she’d marry him; if not, she’d kill him.

And how does this legend apply to the barge named L’Atalante, the setting for a 1934 film by Jean Vigo? Could it be a mock-heroic French joke? Barges aren’t known for their speed. In a larger sense, Vigo was like one of Atalanta’s doomed suitors, succumbing because he relentlessly pursued his desire to make films. Dead at 29 of tuberculosis, Vigo left behind three short films and one full-length classic: L’Atalante.

The story is fairy-tale simple, yet told with implications that are absolutely modern: this combination of magical and social realism is what Wong Kar-Wai and Lars von Trier are groping for.

L’Atalante (which opens Friday, March 30, at the Rafael Film Center in conjunction with its retrospective on Vigo on March 31 and April 1) is a romance set against the iron and smoke of an industrial corridor, on the banks of a canal between the poky, forlorn French villages in the north and the river Seine’s mouth at Le Havre.

Jean (Jean Daste), the newly married barge captain, takes his bride Juliette (Dita Parlo) aboard L’Atalante to join the rest of the crew–a jocular, rowdy second mate named Father Jules (Michel Simon, France’s answer to Charles Laughton) and his assistant, apparently a half-wit. At first, the voyage is as happy as can be, considering the grimy surroundings. But as the barge approaches Paris, Juliette begins to be bored, and she runs off. Jean breaks down; it’s up to old Jules, as uncouth a sailor as you’ve seen in a movie, to round up the strayed wife.

It’s a commercial tale, not too different in outline from the 1938 French hit The Baker’s Wife. Directing it was a bid for money; Vigo’s previous short film, Zero for Conduct, a banned political outrage about a rebellion at a boarding school, is just as surreal and troubling; the barge is sleepwalking as much as floating, covered in a cold silver fog.

The characters on the boat also seem masked, as if in a Melville story. Even Father Jules’ pet cats, which infest the barge, aren’t completely cute or tame; they scratch their way through the picture. At times, Jules’ compassionate interest in the captain’s wife seems gloating, even bullying, in the way he shows his tattoos and trinkets to her. Juliette is played by the 28-year-old Parlo–later the gentle, bereaved German widow in Grand Illusion. Yet here she’s very much the child-wife, most delighted in toys and by the monkey-mannish tumbling of a peddler (Gilles Margaritis) who beguiles her away from the boat.

Vigo’s subversion of a sentimental plot is complete in such moments where the captain becomes a moon-calf, licking a block of ice in his sadness or sticking his head into the oily water to try the superstition that one can see the face of a lover in the dim light underneath the surface.

L’Atalante‘s voyage proves the utter necessity of love in surroundings where all is ruined and blighted. The film shows how romance, like a shaft of light, brings out hidden beauty in the least likely scenery. Though created at an early stage of film history, it’s a stunningly confident and developed work. In his short run as a filmmaker, Vigo passed many artists, proving that the race is not always won by those who endure it.