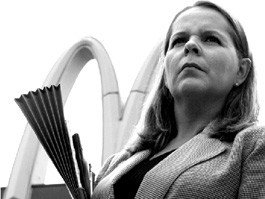 Photograph by Nina Zhito
Franchise and disenfranchised: Karen Carrera ensures that the large corporations don’t get away with railroading their employees.

Go get ’em. That’s the attitude Karen C. Carrera developed as a deputy city attorney in San Francisco dealing with recalcitrant landlords. The approach has carried over to her current North Bay practice as a civil attorney filing class action suits primarily on behalf of low-income women who have been overworked, underpaid and otherwise treated unfairly. “I have a lot of experience saying ‘bad company, bad slumlord, bad employer–comply with the law,'” Carrera says with a laugh.

She’s a partner with the San Francisco-based firm Talamantes/Villegas/Carrera, but most days she works out of a one-room satellite office in Tiburon. The decorations are minimal: her diplomas, photos of her five- and seven-year-old sons, a calendar displaying artwork by Frieda Kahlo and a period Italian poster depicting a dark-haired woman putting on pants above the word “Femminismo.”

Clad simply in shorts and sleeveless top on a recent hot August morning with the babysitter missing for the day and no clients scheduled, Carrera keeps an eye on her boys while working at her desk. She quickly explains that she’s not often this casual; she always wears proper “attorney suits” to court, and slacks and blouses or a dress to meet with clients, to show respect and to indicate that as a lawyer she’s taking their case seriously and working hard for them.

Founded by her husband, Mark Talamantes, and attorney Virginia Villegas, the firm of Talamantes/Villegas/Carrera is devoted to wage-and-hour class action suits, unfair competition litigation and housing-code enforcement. Carrera focuses primarily on assisting employees whose companies appear to have policies of paying less than is legally required for overtime or other hours worked, as well as requiring employees to work through their meal and other breaks.

Refusing to provide legally mandated rest and meal breaks is a health-and-safety issue, Carrera says. It also gives employers an unfair advantage in competing against companies who have higher costs because they do comply with the labor laws.

Her recent cases target a number of companies, including a string of Subway sandwich shops in Santa Rosa, San Rafael, Novato and Martinez. She’s reached a settlement in a suit against seven McDonald’s in Marin County, and has another pending against a Sonoma County McDonald’s franchisee. She’s also pursuing legal claims against a Travelodge in Mill Valley, a North Bay Jack in the Box and a Bay Area-based Mexican-foods company that declared its salaried delivery drivers to be independent contractors even though the drivers are required to submit time sheets–just like employees–for the long hours they work.

Most of these cases came into her office through a legal aid society or other nonprofit groups.

“We try to co-counsel with nonprofit organizations because our cases are impact litigation-type cases,” Carrera explains. “One of the criteria in choosing a case is, will this case have an impact on the Latino community, will it empower the workers, will it change the law or will it change the employers and make them change their practices?”

That’s what gets her legal juices flowing.

“You can change a company’s practices and make a difference in workers’ lives. If we win the case, they get their money back. We disgorge the profits of the company; we make them give the workers back their overtime.”

Almost all of her clients are poor immigrants, who speak little to no English and are timid about fighting for their legal rights. Carrera can relate. Natives of Peru, she and her mother came to the United States when Carrera was seven years old.

“I don’t think we were as poor as a lot of immigrants who come to this country, because we were sort of middle class in Peru,” Carrera recalls. “My mom went to high school and was a secretary. So she was a little more educated and experienced than other immigrants.”

For two years she worked at La Raza Central, a nonprofit group providing free legal assistance to Latinos. Then she spent seven years with the San Francisco City Attorney’s Office, enforcing housing codes. In 2003, Carrera joined her husband and Villegas in their labor-related private practice.

“It was sort of a progression,” Carrera says. “I don’t think I ever felt the need or the desire to go to work for a traditional law firm. I don’t think I would ever feel passionate about that kind of work, unless it was a law firm doing the same type of work that we’re doing now.”

Carrera brings a lot of experience and commitment to the firm, Villegas says. Carrera is definitely an aggressive litigator, Villegas notes, but outside the courtroom Carrera’s bright and caring. “She’s definitely committed to working with our client base, who are mostly low-wage workers.”

With only four attorneys, the firm is small but its focus is large, says associate Jennifer Reisch. “We take on big issues. We’re not afraid to take on big employers. We’ve sort of built up enough collective knowledge as well as alliances with like-minded plaintiff attorneys that we have a capacity greater than what our letterhead would indicate.”

Reisch agrees with the general consensus that Carrera is an aggressive litigator. “I think that comes from her general spitfire personality coupled with her deep sense of litigation being a tool to create a little justice in the world. She keeps our opponents on their toes.”

And that can require a lot of energy. After the Sonoma County McDonald’s lawsuit was filed, Carrera alleges that the employer fired three of the named plaintiffs and offered several hundred dollars each to other workers if they signed waivers saying they wouldn’t sue. There is concern that the employees didn’t understand the ramifications of their signature.

“They were doing this in violation of the law,” Carrera asserts of the restaurant’s management. “There’s a section of labor code that prevents this kind of activity. The employees are basically signing away their rights.”

In the Jack in the Box case, Carrera claims the company is urging its workers to sign statements blocking the release of their wage and hour records.

“What I seem to see as a common denominator in all these cases is that the employers are digging in their heels,” Carrera says. “Rather than trying to work cooperatively and trying to look at a way they can resolve this case, admit to their wrongdoing and work to improve their practices, they’re just making it worse by bribing the employees and extending the litigation.”

In every case, Carrera’s firm asks the judge and jury to award not only what is owed to the employees but also their attorney fees for every hour worked.

“In the end, the employers are going to pay more for these cases. The lesson is, if we show you that there have been violations, come to the table and talk to us, because we’re not going to give up until we win.”