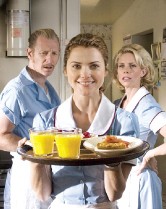 'Waitress' tries to embody the spirit of the little people

When Adrienne Shelly’s film Waitress wafted its way to Sundance, part of its divine afflatus was due to the director and writer’s tragic murder. Let’s overlook that matter for a second. For a little movie, it’s overproduced like crazy; this working-class waitress lives in a Craftsman bungalow house 600 large couldn’t buy. As the Deep South, Southern California gives its worst performance in years–it looks rich, it looks dry, it looks white, it looks secular, it looks like a movie set, even in the exteriors. Pull back from the scenery and the art direction, though, and note the essence of this patronizing fairy tale.

The way Shelly lays it out, the waitress Jenna (Keri Russell) is a country girl, a pie-baking sweetie at Joe’s Pie Cafe whose answer for any of life’s predicaments is to invent a new dessert. As in Like Water for Chocolate and many movies since, cooking interludes interrupt the action, as Jenna conceives of different pies with zany names: “I Hate My Husband Pie” and “Baby Screaming Its Head Off in the Middle of the Night and Ruining My Life Pie.”

At the beginning of the film, Jenna has just flunked a pregnancy test. It’s all because her estranged husband, Earl (Jeremy Sisto), got her drunk and had his way with her. Jenna won’t even think of doing what you might want to do if you’re pregnant and you don’t want to be, you don’t like babies in general and you hate your husband. Shelly sweeps that possibility off the table with the abruptness of a waitress clearing the way for a packed dinner rush. We’re meant to admire Jenna’s gumption for going through with it, deciding to link herself for life with a man she hates by having a baby she doesn’t want. In this, she has emotional support from her two sassy colleagues, played with the archness of a brace of drag queens.

Becky is Cheryl Hines, looking exactly like a tennis-playing Beverly Hills housewife trying to drawl like a Southerner. The late Shelly herself plays Dawn, a blonde mouse with eyeglasses. Dawn has a date who starts stalking her (“You won’t be able to get rid of me,” he promises). It’s a mark of this movie’s sexual politics that she ends up falling for him because he’s so devoted.

Meanwhile, Jenna starts up a heedless, passionate affair with the town’s new ob-gyn, Dr. Pomatter (Nathan Fillion), despite Earl’s insane jealousy. How happy can you be when you’re sleeping with a married doctor who has all the social power and mobility while you’re waiting tables with a second-trimester belly and cracking ankles? Adrienne Shelly may have been a wonderful person and a good mother, but she had about as much comprehension of being a waitress as Marie Antoinette had of being a milkmaid.

Maybe I’m being too literal about Waitress, which might have a grain of emotional truth under the pink and sugar-coated surface. During pregnancy, some women fall in hate with their husbands; by contrast, their obstetricians have all the answers, aren’t worrying about money and the future, and make no personal demands. (Sisto’s toneless pleading for sex–“Please. Please. Please. Please”–got a laugh from the women in the audience. Glad they were amused.)

Sisto is a monotonous, street-crazy type of actor who exhausted his range on Six Feet Under, and Earl is such a vicious, infantile bastard that Jenna looks even more foolish for sticking it out. On the surface, this movie seems to be a fantasy about a woman persisting, but she’s really waiting for a chance for rescue; the movie is a long celebration of diminished expectations relieved by geezer ex machina (Andy Griffith).

Being nice about the circumstances under which this film arrives–and overlooking its derivative, televisionistic qualities–might be a kindness to a dead artist, but it’s not doing the living any favors. This stale old pastry has all the originality of a convenience-store berry pie.