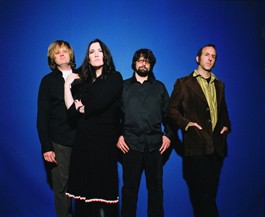 Kinski’s ‘Down Below It’s Chaos’

Even with a mixed-bag new album, Kinski lead the pack.

Instrumental rock bands never reach the same levels of mass adulation that their vociferous counterparts do. Maybe it’s because people naturally respond more to the charisma of a lead singer, or perhaps music fans prefer to sing songs to themselves rather than hum them. While a lick can be as easily grafted onto memory as a snazzy chorus, people tend to identify songs with stories. Without words, the story of a song is 100 percent music.

Kinski aren’t strictly an instrumental band, though the matter-of-fact nature of their vocals, when they do appear, suggests that their attention lies elsewhere. Totally kicking ass, perhaps? In a land crawling with well-intentioned but musically overindulgent Krautrock/prog fans playing midtempo noodlings, Kinski shine as a beacon of powerful, engaging jams. Since forming at the end of the 1990s, the Seattle quartet have toured frequently and recorded a strong catalogue of blissed-out space rock.

Due to their unfresh faces (Kinski are no spring chickens), woman-on-bass setup and love of feedback, Kinski are often compared unfavorably to Sonic Youth, but they are far less downtown cool and far more acid-soaked. The band recently released their fifth album, Down Below It’s Chaos, and are garnering more attention than ever, having toured with Tool earlier this spring.

True, they don’t bother to make eye contact with the audience, but the best way to experience Kinski is live. They don’t smash anything or punch each other onstage, but their songs are living things whose energy penetrates a crowd.

Alas, one needs to dwell in Seattle to make a regular habit of catching Kinski shows, but their albums are rewarding; too bad Down Below It’s Chaos, despite the presence of strong songs, is their least coherent. Since their first release, 1999’s Space Launch for Frenchie, Kinski’s albums have shifted from sprawling psychedelia to capable but somewhat monotonous shred metal.

But it never gels. Kinski’s first three albums opened with epic, slow-building space jams that were fraught with musical tension. A bit formulaic, perhaps, but they always delivered a big payoff; at a song’s close, you’d felt like you’d been somewhere profound.

There’s a bright side to the sampler-pack character of Down Below It’s Chaos: it’s probably the best way to get a taste of all the things this band are capable of. Maybe a handful of adventurous Tool fans who caught them this spring (and presumably did not fall asleep) are enjoying a gateway to experimental space music, the kind that tells a story without uttering one word.