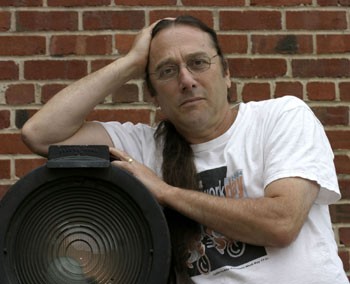 Ren Man: Former Sonoma mayor Ken Brown serves his community through the gamut, whether as janitor or theater producer.

Ken Brown and the art of (Sonoma) living

While not exactly a Luddite, Sonoma City Council member Ken Brown got rid of his checkbook in favor of cash 10 years ago, doesn’t own a television, bicycles as his primary form of transportation and only began using his office computer after it sat on his desk for five years. Yet, says, Brown, “I always wanted to be an executive; I like to be in control.”

Fortunately, the town of Sonoma, Brown’s personal and public domain, lends itself to just such kinds of seeming contradictions.

Brown himself is easily among them. He believes that it’s “totally loony to drive on freeways” and he avoids flying in airplanes. “Everything I need is right here,” he says, gesturing beyond the window of his office in the Sonoma Community Center. Brown does all of his shopping, for example, in the town where he has lived for more than 25 years and raised three children who are now mostly grown, and where he is now raising a fourth child, three-year-old daughter Eden, with wife, Jewel. He is also general manager of the Sonoma Community Center and has recently begun to produce its theater, a lagging art in Sonoma which he helped financially reinvigorate.

In many ways, Brown is the poster child for the Sonoma lifestyle, working, socializing and advocating for where he lives. “I have every intention of keeping my life as it is,” he says firmly.

Clad in his laid-back uniform of T-shirt, khakis and long ponytail, Brown, also Sonoma’s former mayor, is one of the town’s most recognizable public figures, but not necessarily the traditional image of a government figure.

“I think I’ve successfully dispelled the notion that I’m just a long-haired hippie,” he laughs. In fact, he considers himself just another blue-collar worker, hailing “from a line of blue-collar workers,” a detail that he feels makes him an ideal city council member. “I’m proud to be a politician,” he says with a smile. “I finally realized there have to be politicians in civilization, because we provide the mechanism to realize citizens’ desires. I provide a unique service in that I’m truly able to speak for the average citizen’s experience, because I am one.”

Being a member of the city council also taps into what he says he loves about being the producer of the Community Center’s theater.

“The city council meetings are like theater. I started going to them back in the ’80s when I was the first commissioner of arts and culture in town. There’s a script–the agenda–and people often have prepared remarks, but as the dialogue unfolds, it’s like improv. The mayor is like the director and the audience is the public. You have a microphone, and you’re definitely onstage. I love the interaction and how that evolves over time. The whole fabric of the town is alive at public meetings.”

Brown made his first run for office against two incumbents in 1998 and lost by 150 votes.

“I got overconfident,” he says.

Undaunted, he ran again and was elected in 2000 by one vote. He plans to stay on the council, he says, until they have to “drag” him away. “The desires of the citizens match my own,” he says, adding, “I’ve learned to be really aware of the law of unintended consequences, to take the long view because Sonoma is very small; every decision is felt all over.”

If holding a steady job, raising a family and being a civil servant seem like plenty to Brown, they are just a few of the many columns that prop up his sense of purpose.

“Being immersed in community life since the early ’70s, I’ve seen how important community service is to the life of a city,” he says.

Becoming producer for the Community Center’s theater six months ago fulfills his desire to support what he calls the “tremendous community” of artists who reside and practice their art in the community. As producer, Brown has opened up the two theaters–the intimate Backstage Theatre and the larger Andrews Hall–to rentals and co-productions, which has brought the theater budget into the black.

Having just directed Steel Magnolias, Brown is content to produce the season finale of The Shadow Box, a drama running at the Backstage Theatre through June 4.

“I always look forward to work,” he says. “I love my job and my community.” Brown gives special thanks to Jerry Casson, the woman whom he considers his mentor, who was nominated by President Franklin D. Roosevelt to be the first social services commissioner in Sonoma. Along with Dan Ruggles, Dr. Carol Andrews and his wife, Catherine, Casson founded the Community Center some 25 years ago as well as being on the ground floor with Meals on Wheels and Pets Lifeline, nonprofits that still flourish today.

The Vintage House Senior Center is also dedicated to Casson. Brown hopes to raise money for a public art statue in Casson’s honor. “I’m blessed to have had Jerry indoctrinate me,” he says. “I was not long out of the army when I came to Sonoma in 1974. I was driving a caravan for the Community Center, and Jerry said to me, ‘Are you awake or asleep?’ I said, ‘I’m awake, I think.’ She said, ‘Good, if you’re really awake, get to work.'”

In addition to his Community Center work, Brown hosts two radio shows on the Sonoma Valley’s public radio station, KSVY 91.3-FM, and is the force behind the Center of the Universe Cafe, monthly arts dinners that promote good food, good conversation and great community.

“Sonoma has an identity, and underlying everything is that this town has a spiritual quality that allows for self-reflection,” Brown says. “Healers work and live here. It is resplendent in nonprofits that do the work of a parks and recreation department. Not only that, but this is one of the few cities in the U.S. that operates in the black.

“If the world could turn its eye to the art of Sonoma living, I think it would be astonished.”