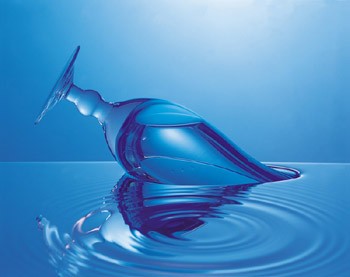 Liquid Manna: While other counties have looked to conservation as a cost-effective way to prevent drought, Marin may prefer the miracle of money.

Paul Helliker, general manager of the Marin Municipal Water District (MMWD), worries that the taps, showers and hoses of Marin County might someday run dry. If the recent history of droughts in the North Bay region are any gauge, Helliker has every reason to be concerned.

“If we had a recurrence of the 1976-’77 drought here in Marin County, we would face 65 percent rationing during the second year,” he says. “We rely a lot on our local reservoirs, and in 1976-’77, those reservoirs came close to being completely depleted.”

Determined to avert a repeat, the MMWD has pinned its hopes on desalination, the process of extracting fresh drinking water from the salty soup of San Pablo Bay. A $1.2 million pilot plant has begun preliminary operations near San Quentin; if it performs as hoped, the district is preparing to spend another $50 to $70 million to build a full-scale desalination facility.

The temporary pilot plant, which will run for nine to 12 months, can produce 100,000 gallons of fresh water daily. A much bigger permanent plant could generate up to 10 million gallons per day. “If we ran it full-time, it would produce about a third of the water demand here in Marin County,” Helliker notes, adding that short of drought conditions, the plant will not operate at full capacity. “We’re planning on starting out running it at one-tenth that amount during the winter, and a third to half that amount during the summer.”

This is not the first time Marin has explored desalination. Following a test run in 1990 that proved highly expensive, county residents were given a choice between bond measures to fund a desalination facility or a pipeline to bring in water from the Russian River. They opted for the pipe.

“Everyone thought the Russian River was a highly reliable source without serious environmental problems,” recalls Jared Huffman, the current president of the MMWD. But now the reliability of the Russian River is in serious question, thanks to litigation that threatens to further curtail diversions from the Eel River into the Russian and efforts by state and federal regulators to save threatened salmon and steelhead populations in the Russian River watershed.

“We have an opportunity to not only avoid additional diversions from overtapped rivers like the Russian and the Eel, but to actually go further and reduce our current deliveries from those rivers,” Huffman says of the proposed desalination plant’s potential.

Desalination is essentially a two-stage process. The first stage removes all the sand, algae and other sediment from the seawater; then the still-salty water goes through a reverse osmosis process in which it is pushed through an extremely fine plastic membrane under high pressure. Only the freshwater molecules can squeeze through the membrane; the brine remaining on the other side is discarded.

It’s the first phase of the process that’s getting the closest scrutiny. Newly developed microfilters are less expensive and more durable, and a major part of the pilot project involves comparative testing of three competing filtration systems. With these and other technical innovations over the past decade, Huffman now predicts that desalination on the scale proposed in Marin can produce freshwater at a cost of no more than 25 cents per gallon, and possibly just a fraction of that.

Another obstacle desalination plants must contend with is disposal of the leftover brine. “You have to have the ability to discharge the brine,” notes Miles Ferris, director of utilities for Santa Rosa. “People who have ocean outfall don’t have a problem with that.”

That would include the MMWD, as its planned site is conveniently adjacent to the Central Marin Sanitation Agency’s wastewater treatment plant in east San Rafael, which already discharges into San Pablo Bay. “There’s a sweet spot where you can blend the brine with the wastewater and have an environmental benefit,” explains Huffman. The brine can be used to match the salinity of the treated wastewater discharge to bay water.

That’s an equation David Lewis of the Save San Francisco Bay Association is watching carefully. “They’ll have to look at the economies and whether they have enough [treated] water that they would be able to recombine these brines from a large-scale plant.”

Noting the sizable investment the new plant will require, Lewis observes that “other water districts have found that it is much more cost-effective to do additional conservation measures than to try to create a new source of freshwater. But the economics may be different in Marin.”

Adding to the economic impact, notes Dietrich Stroeh, former general manger of the MMWD prior to 1980, are the ongoing energy costs of the desalination process. “You don’t just plug the thing into a wall socket somewhere and expect it to run,” he laughs, adding that “solar villages” in the southern California desert have been suggested as one possible energy source, “but that has not been fully explored.”

If and when those obstacles are cleared, Stroeh says Marin should still maintain its pipeline to the Sonoma County Water Agency, “just for pure flexibility, to keep redundancy in the system.” That could allow the MMWD to aid the separate North Marin Water District in case of a water-supply emergency.

That kind of cooperative potential may be unique among the many desalination projects currently under study in the state.

“Many of these projects up and down the coast are being proposed by huge multinational corporations,” Huffman points out. “This is the only one in California that is publicly owned and operated.”