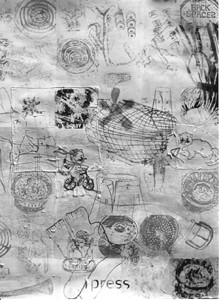 ‘Domestic Serendipity’ by Denise Traverso is part of the CACSC’s ‘Fortune’ show.

Surely the arts should be a pure pursuit with intelligence and talent keening in unblinking dedication to the creation of beauty. Surely, visual and musical arts, dance, theater, and literature should be produced and supported in an ethereal aerie of wildly blossoming creativity that gives no thought to the crassness of bread, milk, and mortgage. Surely, this is a jest.

Which may explain why, when it needed to hire a permanent executive director, the Cultural Arts Council of Sonoma County chose one more grounded in milk and mortgage than ethereal aeries. Money, it is rumored, can be a good thing, and Karen d’Or knows how to raise it. A surname translated as “gold” doesn’t hurt, either.

A former mortgage broker with an MBA, who has variously owned her own fundraising consulting firm, served as the development director for COTS (Petaluma’s homeless support program), and was most recently the moneymaker behind the Sonoma Land Trust, d’Or began her new $57,000-a-year position April 4 amid a swirl of change that hasn’t shaken her eye from the bottom line.

A vigorous woman, d’Or steps to the helm of the CACSC after the bitter departure of former executive director Jim Johnson amid staff firings, resignations, board shake-ups, the hasty promotion of board member Liz Meyerhoff to a six-month interim executive stint, and the loss of the lease on the SoFo 2 Gallery in Railroad Square. There was a short moment there when some speculators made unhappy bets on the CACSC’s ability to even continue as an entity.

All of which conspire to make it almost uncanny that an exhibit titled “Fortune,” planned long before d’Or’s arrival, opens June 13 –and that would be Friday the 13th. A juried exhibit of some 60 pieces chosen by Artweek magazine contributing editor Barbara Morris, the show examines kismet and plain old dumb luck as they appear for both good and ill. Exhibit coordinator Jennifer Beckham explains that the idea occurred as she and other longtime staff members weathered their recent turmoil.

“And fortune,” adds d’Or, “can manifest itself through wealth, fate, ideas that are a surprise. It’s not always good fortune but is one of those driving flows in life that artists can bring up with clarity.”

Clarity, indeed, seems to be the council’s new defining metaphor. Ensconced in a storefront gallery space in downtown Santa Rosa and boasting a gift shop featuring ARTrails pieces for under $400, the new CACSC office has high ceilings, white walls, and a sense of quiet determination. Beginning her position not only after a spate of seriously bad mojo at the council but among the severest and most wrong-headed state budget cuts in recent history, d’Or’s first act was to look at her meager $400,000 in annual resources. Fearing that state legislators might wholly cut arts-council funding statewide, she simply zeroed the $30,000 of anticipated monies right out. If it comes back, great; if not, d’Or has already taken the bite.

This tough-minded management style may be exactly what the council needs. “We have diverse sources of funding, so we’re lucky,” d’Or says, “but a lot of smaller arts councils rely entirely on the state, and they just don’t have it.” Legislators were poised last month to indeed take a full 85 percent of arts funding out of the California budget, relenting slightly after d’Or and other arts leaders mounted an impromptu phone campaign. Nothing is yet signed, but their persistent calls may have helped preserve some of the funding.

Some skeptics suggest that d’Or’s background in finance leaves her ill-prepared to lead an arts organization. “My predecessor told me that artists are expressive anarchists,” she laughs, admitting, “I’m on a fast learning curve in terms of the technical side of the arts. But I’ve been a supporter for many years.”

D’Or’s mother instituted Marin County’s artist-in-the-schools program in the ’60s; her ex-husband is the executive director of the Cotati Symphony; and she’s been an active booster in her daughter’s high school choral program, helping to send the students to Italy last year for a performance before the pope. So, OK, it’s not a stellar steepage, but d’Or dwells in the meta anyway.

“Art is an integral part of academics,” she says, “and it is the answer to a number of things. It’s the answer to downtown revitalization and to smart growth, [and] it’s the answer to helping to attract tourism.” To that end, she’s taking her staff on an upcoming retreat to reboot and revamp the council’s strategic growth plan. “It’s as a strategic plan should be: It’s lofty and grand and big-picture. I want to give these goals a concrete, measurable, yet still community-minded task list.”

For example, what if the arts council itself didn’t have to labor under the burden of producing exhibits, events, programs, and performances in all disciplines all year long? What if it instead used its grant-writing muscle to encourage, mentor, lead, and fund others to do the same? What if groups could hire its nonprofit status as an umbrella under which to produce their own dreams? What if the CACSC could provide the webbing and infrastructure to tie all of the disparate–and often competing, at least in terms of private funding–arts centers in the county into one sinuous, ever changing entity that could provide a myriad of exciting cultural opportunities for us all?

“I have wonderful contacts in the business community telling me that they don’t want to hear from 18 different arts agencies all needing money,” she says. “I’m interested in increasing audiences for all of us in a coordinating model. We’re trying to serve the community, and it’s quite difficult to be all things to all people, but the public really wants a rich quality of life here and wants us to be healthy. I’m certain of it.”

As for “Fortune,” the exhibit features an unusual fundraising tactic, offering a fortune-cookie raffle in which some of the cookie’s messages have been replaced with restaurant gift certificates.