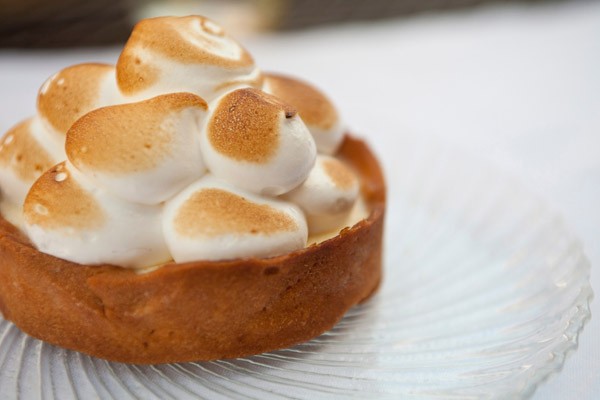 The fragile art of the pastry chef can make or break a meal; meet four with the gift of sugar, egg and cream

We elevate chefs to celebrity status, giving them their own TV specials or competitions. We revere the heroic butcher and the ability to break down whole animals. We pick select cocktail bartenders and adorn them with “mixologist” status.

But for some reason, pastry chefs have yet to get their due for the sweet things they create. It’s not right.

Appetizers and entrées can be great, but for many diners, dessert is what they’re truly waiting for—and given that dessert comes last, a pastry chef can either make or break a diner’s experience. Serve a dessert that’s over-the-top or too sweet, and a diner staggers away stuffed and uncomfortable. Serve a dessert that’s underwhelming, and it can cast a shadow over the entire meal

But a pastry chef who exercises a light touch, who can crown an enjoyable meal with a few well-chosen bites of something sweet, will send a customer off into the night satisfied, happy and eager to return.

Creating desserts requires more than a sweet tooth. Making pastries and sweets is an exacting profession that’s as much chemistry as it is cooking. Grilling a steak or sautéing a pan of vegetables? That requires intuition and gut feeling, sure, but baking a cake or preparing a chocolate soufflé is a delicate science. If proportions or temperatures are off by even a slight amount, the results can be disastrous.

Yet dedicated, hardworking pastry chefs often labor in anonymity, quietly whipping cream and caramelizing sugar out of the limelight. We hope to correct this injustice.

We sat down with four Sonoma County pastry chefs to talk the mystery and majesty of sugar, butter and flour. All of them create confections for restaurants participating in Sonoma County Restaurant Week, running Feb. 27–March 4, so if you’ve got a sweet tooth, now’s a good time to satisfy your craving.—Stett Holbrook

Walking into Viola is like coming home to the comfort of mom’s kitchen for lunch. Red tulips grace the wooden tables, and family photographs smile down from the creamy walls, many of Grandma Viola, the cafe’s namesake. But how many moms’ homes have a glass pastry case just inside the door, filled with delicious jewel-like lemon tarts, chocolate mousse domes and chocolate caramel tarts with sea salt? And isn’t dessert served after you eat your vegetables and clean your plate? At Viola’s, owner and chef Jennifer McMurry offers diners the best of both sweet and savory worlds, and Vickie McMurry, Jennifer’s mother, does indeed greet patrons at the door.

Jennifer McMurry grew up baking alongside her grandmother, who lived on a farm in south Santa Rosa. “My grandparents raised all their own fruits and vegetables and meat,” says McMurry proudly. “Grandma made her own cheese and salami, and canned everything, even homemade pickles. She was always working in the garden.” The farm is still there, adjoining Grandpa George’s business, Bataeff Salvage. “I grew up working at flea and farmers markets, selling stuff from grandpa’s store and produce from the farm,” McMurry recalls.

Five years after earning a business degree, McMurry changed careers, reaching back to her roots. She found her passion while attending pastry school at the Culinary Institute of America in St. Helena. “I love to make pastry; it was the most exciting at the time,” says McMurry. She graduated from the CIA and moved to Las Vegas to work at Wolfgang Puck’s trifecta of Spago, Wolfgang Puck’s Bar and Grill, and Postrio.

“It was the best thing I could have done,” enthuses McMurry. “It built a foundation for everything I’ll ever do. Las Vegas was crazy. You’ve got to jump in. While working at the pastry station, I was next to the pizza station. When they got backed up, I’d move over and help make pizzas.”

McMurry’s bestseller is her lemon tart, but, she says, “now I prefer the savory side of cooking. The cafe brings both sides together.” Viola’s showcases homemade English muffins, fluffy croissants and breads served with eggs Benedict or an appetizing selection of sandwiches. “For me, it’s a great balance. I get to do both. I’m happy with something as simple as a warm chocolate chip cookie out of the oven.”

Casey Stone knows how to butcher an animal, slice up a whole fish and take the heat of a kitchen’s open grill. But early on in his culinary career, the soft-spoken, 31-year-old cook realized he preferred cream and whisks to flesh and sauté pans.

“It just kind of hit me that I wanted to do pastry,” he said.

The Hawaiian native has been the pastry chef at Santa Rosa’s John Ash & Co. for eight years. He oversees all the desserts, breads and pastries for the restaurant and special events at the adjoining hotel, the Vintners Inn. His path to desserts took root at Oregon’s Western Culinary Institute; he then began cooking in Hawaii, but soon realized he wanted to pursue pastry. He enrolled in the pastry arts program at the Culinary Institute of America’s Greystone campus in St. Helena, and eventually landed a job at John Ash & Co., where he’s been ever since.

His desserts are fairly traditional—crème brûlée, gelato, molten chocolate cake—but he utilizes the gardens and fruit trees that dot the Vintners Inn spread, as well as other less traditional ingredients like beer and herbs.

“I draw inspiration from walking around the property,” he says. “I get to be super-creative.”

He also likes using atypical ingredients. Stone makes a bread pudding accented with the heady aromatics of rosemary. His cheesecake is made with fromage blanc, a fresh cheese produced by Marin County’s Cowgirl Creamery. And he makes liberal use of salt, shying away from cloying desserts.

Stone’s ideas for new desserts often start from ingredients or wine pairings. The Vintners Inn is owned by Ferrari-Carano, and he often finds inspiration in sweet wines when creating his desserts. Once, he tasted a late harvest zinfandel and knew instantly what he wanted to make.

“The first thing that popped in my head was blue cheese,” Stone says. “My ideas usually just start with tasting something.”

With eight years on the job, Stone says making people happy with his end-of-the-meal creations is what keeps him engaged. He also likes the sensual aspect of cooking—using feel, touch, smell and taste to gauge when a dessert is sufficiently delicious. While a pastry chef must follow recipes to the letter, there’s a tactile element that comes with time, an ability to determine when a dough or cream filling is ready by how it feels or the way it looks.

“I like that it’s something that only I can do,” he says.

It was the romance of the wine country that lured Jamon Harper back to the mainland. After a recent three-year tour with the Fairmont Orchid resort on the Big Island of Hawaii, Harper returned and in January took the helm as executive pastry chef at Healdsburg’s Dry Creek Kitchen.

The importance of sourcing local ingredients, held by everyone from the area’s best food trucks to the finest restaurants, weighed prominently in Harper’s decision. “It was one of the reasons I wanted to come back to California,” he says, “to get into the farmers-market scene. In Hawaii, you can go buy coffee directly from the coffee farmer. That is the closest you can possibly get to food.”

The farm-to-table ideology has been ingrained in Harper since his childhood days on the Caribbean island of Barbados. The mystique of his mother’s flawless baking—always by memory—drew Harper onto his culinary path, and, subsequently, to New England’s prestigious Johnson & Wales University. Honing his talents for the wonders of sugar and glaze, he moved directly into the assistant pastry chef position at Barbados’ iconic Sandy Lane resort, creating wedding cakes for the likes of Tiger Woods and other A-list celebrities. Along the way, he has served as resident pastry chef with the Four Seasons in Boston and West Palm Beach.

A fan of the culinary classics, Harper cites such standards as Burt Wolf’s Table as largely influential in choosing the wide-ranging study of desserts. But it’s Anthony Bourdain who keeps him excited about the industry. “To me, he shows, if not what a chef is, what is in their minds,” asserts Harper about the controversial food personality. “The fact that he is so poetic and philosophical about the food, that he doesn’t just show luxury places—he goes and eats street food. That’s what it is all about, that’s where the food is.”

This animated take on culinary fare ties into Harper’s passion for pastry. Showcasing a rather unusual addition to gourmet desserts is one of his signature ingredients, popcorn. “It is an amazing thing to me,” he says, “that it starts off as this little kernel and it explodes into this huge, beautiful, fluffy white thing. It brings everyone back to childhood—I don’t think there is anybody that doesn’t like popcorn.”

His zeal for cooking unvarnished by his depth of experience, Harper adds: “Passion fruit, now that’s my number two. We used to have a passion fruit vine with the most beautiful flowers when it’s blooming. There is nothing like it, it’s unreal. How can you resist this thing?”

As is the case with many chefs, Amber Simpkins doesn’t get fancy when talking about her favorite dessert. “Anything with chocolate,” she says. Specifically, her pleasure is a simple fudgey chocolate cake with chocolate frosting, accompanied by a glass of milk.

But her creations at Healdsburg’s Spoonbar are more than just simple pleasures. Not only does Simpkins create fresh, new desserts on a nightly basis for the restaurant, she’s in charge of confections for h2h hotel guests, and for making bread each day.

Though she was educated at the Culinary Institute of America in New York, Simpkins says she essentially started her career around age 10, when she would help her mom bake in the winter (“It helped keep the house warm,” she says), and tagged along during catering gigs.

Now Simpkins likes to take advantage of the local bounty, using seasonal fruit for a pop of color. She rarely uses a recipe more than once for dessert, which bodes well for frequent guests.

Simpkins is modest about her abilities and sees her job as no different than anyone else’s. “People think it’s this glamorous job,” she says, “but it’s not.” She stretches out her burn-marked arms as evidence, and motions to the lingering darkness outside during a 6am interview.

Asked what else she might be doing, Simpkins pauses for a minute. She might be a stay-at-home mom, she mentions, with her two-year-old daughter and four-year-old son, but Simpkins doesn’t escape the critics when she gets home. Her husband was also a chef at Spoonbar when she started, and her daughter can be a picky eater. Luckily, her son “pretty much eats everything,” she says.

Simpkins has been at Spoonbar for almost two years (since about the time it opened, she says), assisting the previous pastry chef before stepping into her current role in October.

Though she arrives at work sometimes as early as 3:30am, even being surrounded by fresh pastries doesn’t tempt Simpkins to drink coffee—it makes her jittery. Sometimes she naps after work. This easygoing personality might be traced back to her growing up in Jenner.

“There’s not much to do there,” she quips of the tiny town, “if you’re not a surfer.”

Fork in the Road