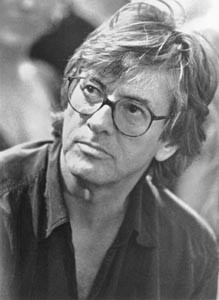 Jesus in the Movies

Salvation Saga: “The message of Jesus is the way he lived,” says director Paul Verhoeven, who will speak March 5 in Santa Rosa as part of the Jesus Seminar. “That he ultimately was killed was something that just happened.”

THE STORY OF JESUS–that troubling legend of mankind at its worst and its best–has been a subject for the movies since the beginning of cinema. But a movie, generally speaking, is meant to please everyone, and this is almost impossible when the subject is Christ. Filming the story of Christ tends to offend both the pious and the impious. Watching yet another version of the Passion Play, New Yorker magazine film critic Pauline Kael asked the rhetorical question, “Why do filmmakers think it’s such a good story, anyway?” What’s left out of the story says as much about a society as what is included.

On March 5, the Santa Rosa-based Westar Institute hosts a panel discussion and public forum on the problems of portraying Christ in the movies. The institute yearly hosts the Jesus Seminar, a gathering of religious scholars to discuss the secular, historical roots of Christ, based on archaeological finds, newly discovered documents, and new translations of the Gospels. The internationally renowned group fights the popular notion, as George Bernard Shaw put it, that confusion is the proper condition in which to read the Bible. The institute has also published, through its own publishing house, W. Barnes Tatum’s Jesus at the Movies: A Guide to the First Hundred Years (Polebridge Press; $17.95).

At the forum, Tatum, a professor of religion at Greensboro College, will be getting together with the Episcopal priest Jim Friedrich and B. Brandon Scott, a professor of the New Testament at the University of Tulsa. Joining these divines will be the well-known director Paul Verhoeven, a Jesus Seminar fellow who is seriously attempting to film a new life of Jesus.

The idea could draw mockery–OK, here’s the maker of the ridiculous strip-fest Showgirls and the sci-fi flick Total Recall wanting to film a Passion Play (Matthew 12:33: “A tree is known by its fruit”). But there are a few historic parallels, there being nothing new in the picture business: Nicholas Ray, who made the 1961 King of Kings, later directed a soft-core porn picture titled Wet Dreams; Zalman King, who played the Messiah in The Passover Plot, is now wealthy from his own soft-core films such as Delta of Venus and 9 1/2 Weeks; and did you ever see Pier Paolo Pasolini’s Salo, the Italian director’s version of the exploits of the Marquis de Sade? Much rougher sledding than Showgirls, yet Pasolini also made The Gospel According to St. Matthew, one of the more admired versions of Jesus’ life.

The same temperament that finds transcendence in sex–the magic of one person merging into another–may eventually seek it out in the transcendence of faith.

During a phone interview, Verhoeven acknowledges that the life of Christ in Israel is a departure from the story of showgirl Nomi in Las Vegas. “It’s different from my usual American work, yes, but not so different from my European work, like Turkish Delight and Soldier of Orange. Here I’ve made RoboCop, Total Recall, Starship Troopers … it’s sometimes difficult breaking away from science fiction. But in [my native] Holland, my work was very much about autobiography and biography.”

I ask Verhoeven if he believes in the Resurrection. “I believe in the Resurrection of the Word,” he says. “I believe the disciples felt that Jesus was with them again. The [story of the] fingers in the wound I doubt, but I think the disciples felt a strong force around them, though the Church has postulated Jesus resurrected in body and came back. The Jesus Seminar has clearly stated that Jesus was buried and his body was decomposed.”

RAISED A CATHOLIC, I’d been trained to believe that Jesus went to the cross in measured steps, fully aware of where he was heading. But after reading histories of the bureaucratic hot-potato game the various Judean authorities played with the case of Jesus, the Crucifixion seems more like a ghastly mistake on behalf of three parties: the Romans, the Jews, and Jesus himself.

“The Jesus Seminar describes it as ‘a car accident,'” Verhoeven says. “My guess is that Jesus was a Jewish cynic, witty and sharp, but then he had a change of mind and believed that the Kingdom of God was approaching. Remember that he was crucified for being king of the Jews, as a crown pretender.”

What about the dramatic problem of telling a story in which everyone knows the ending? “Well, what about Titanic?” Verhoeven responds shortly.

The writer Graham Greene, another good Catholic, noted on his travels that the poorer the country, the bloodier the crucifix. To inspire faith and sympathy, Jesus has to look more beat up than anyone else in a beat-up land. How do you film a crucifixion?

“The Crucifixion doesn’t have to be close to the camera,” Verhoeven allows. “It can be far away–it’s still the same story, the movements and details. These are the two ways of doing it: the more artistic way and the visceral. The political side of the film will be important, to remind people that the Roman government was crucifying people all the time. Maybe we’ll follow an earlier Crucifixion. It was a normal thing. Mark and all of the other gospel writers state it very simply, ‘He was crucified.’ His readers knew exactly how bad that was, how gruesome and terrible.

“But it would be wrong to stress this as the most important thing about Jesus. [Missionary doctor] Albert Schweitzer, who wrote about Jesus, said that only through suffering and pain can we get close to Jesus. Still, what Jesus was talking about was love, a happy, evangelical message. Of course, as Nietzsche comments, the evangelical message was immediately made de-evangelical, to emphasize the suffering.

“The message of Jesus is the way he lived. That he ultimately was killed was something that just happened. By seeing it as a sacrifice we diminish the importance of what he’s thinking. Putting the Cross and the Resurrection at the heart of the story has diminished the importance of Jesus’s message.”

As Pax Americanus supersedes Pax Romanus, Jesus’ story has an uneasy, pertinent side, something that ought to haunt any world power when it contemplates earthly power and glory. “Did you hear about that town hall meeting about Iraq?” Verhoeven asks. “Think of America’s own partnership with Indonesia, despite the massacres in Eastern Timor. We want Indonesia to be quiet and tranquil, so we can participate in their riches. Just like Rome, we want these countries to be quiet and docile.”

An important part of the message of Jesus is the frustrations of an occupied peoples about their oppressors. Considering such matters as the history of Jesus doesn’t sink Jesus beneath wisdom like a stone, as that cloying line of Leonard Cohen has it. Instead, study rebuilds respect for Jesus’ still revolutionary wisdom.

Paul Verhoeven and other fellows of the Jesus Seminar speak on “Jesus at the Movies” on Thursday, March 5, at 7:30 p.m. Flamingo Hotel, Fourth Street and Farmers Lane, Santa Rosa. Tickets are $10. 523-1323.