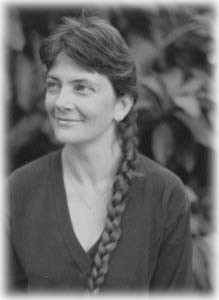 Into the Woods: Jean Hegland sees the forest for the trees in her new novel.

ONE OF THE YEAR’S most fascinating science fiction novels has nary a starship or extraterrestrial in any of its 193 pages. Instead, novelist Jean Hegland’s Into the Forest (Calyx, 1996) takes as its subjects Nell and Eva, two intelligent teenage girls trying to survive in an isolated house in the heart of a redwood forest, while outside society gradually falls apart and reverts to chaos. Nell and Eva’s priorities aren’t to seek out new life forms and new civilizations; they’re to figure out how to grow their own food, keep healthy, and defend themselves in a world suddenly gone low-tech and savage.

Interestingly, the actual details of society’s collapse are left vague, and form an indistinct backdrop to the realities of the girls’ day-to-day existence. “I think that I was much more interested in how a disaster would/will affect individuals than how it will come about,” says Hegland, sitting at a table on the 55 acres of second-growth forest property she shares with her husband and three children near Healdsburg. “Individuals won’t know what’s happening in the wider world. You don’t know what’s going on and you’re left to your own devices.”

DRIVING OUT to meet Hegland at her remote home, it isn’t difficult to guess what inspired her to tell the tale of two teenage girls living far from the nearest town. To reach her house, one must navigate several miles of axle-shattering dirt road and cross a one-lane bridge rickety enough to make Indiana Jones wish he’d majored in mathematics instead of archaeology. “We’re not quite as isolated as Nell and Eva,” she says.

Still, Hegland is familiar enough with the often unglamorous realities of rural life to have not succumbed to Rousseau-like fantasies and romanticized the glories of living close to nature. “I don’t have any illusions about what Nell and Eva are up against,” she says. “They’re going to have hard lives, to lose teeth and break bones, and their baby could choke on something or die of any number of things.

“And yet, we place this enormous value on living a long time and avoiding discomfort, and I wonder sometimes if that value is misplaced.”

Hegland’s two minds on the subject of civilization and its discontents are manifested in the novel’s big-wow finish. Without giving away too much, suffice it to say the two girls make an irrevocable break with society. “Some people find the ending really heartbreaking, while others say ‘Yeah!’ and are really excited by the girls’ decision.”

Mixed reaction to the finale aside, Into the Forest has garnered plenty of praise since its debut in July, with Hegland garnering positive reviews and touring independent bookstores up and down the West Coast in support of the novel. “Since it was published by a feminist company, a lot of the interest has been coming from those quarters,” she says, of the book which has just been picked up by Bantam. “But I’ve also had people tell me things like ‘My 19-year-old son saw my copy and then read the book and loved it.'”

Stranger still to Hegland has been the desire of some readers to draw one-to-one correspondences between events in the book and the author’s own life and personality. “I’ve been surprised at how much people who know me want to read my life into the book,” she says. “I suppose that has to do with people’s interest in that mysterious thing that happens when stories get written. But none of my characters corresponds exactly to me or anyone else. There’s some of me in all of them, but their lives are not my own.

“And,” she adds, laughing, “they had a much nicer house than we do.”

HAVING LIVED and studied for a time in eastern Washington state, Hegland got to see a societal breakdown up close when Mount St. Helens blew its top in 1980. “That was the funny thing about the disaster,” she recalls. “The people closest to it knew the least about what was going on.”

But even a cursory read of Into the Forest reveals that Hegland’s primary source of inspiration was not her life but her imagination. And like many fiction writers, she felt the disorienting twinge of having her own characters become more real to her than the actual people in her life. “It was very strange,” she says. “I’d be writing, and then I’d get up and actually be surprised to see my own face looking back at me in the mirror, and not Nell’s. I even had Nell’s dreams sometimes.”

Though already at work on her next novel, Hegland makes it clear that she hasn’t entirely left Nell and Eva behind. “I’m definitely finished with this book,” she says, “and I’ll never write a sequel, but I do find myself thinking about the characters, and what became of them, and how they’re doing now.”