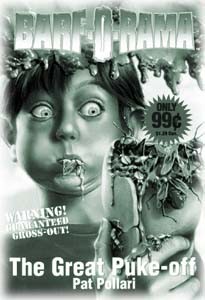 FIRST THERE WAS Mad magazine and later came Pee Wee’s Playhouse and The Simpsons. Now, naughtiest of all, there is Barf-O-Rama–a series of books that will surely delight kids and make their parents shudder. With its emphasis on scatology for scatology’s sake, this series won’t be winning any Caldecott awards.

So far, 10 Barf-O-Rama books have appeared in print, with titles like The Great Puke-Off, Pig Breath, Dog Doo Afternoon, and The Legend of Bigfart. Seven more are due out in coming months. The books deal with “a helmet full of hurl,” “fettuccine al farto,” and “buttwurst.” If these books have any redeeming value, it is that they will keep little Timmy turning the pages of an actual book, rather than zoning out in front of the VCR.

The series is the brainchild of Ann Brashares, a very mild 29-year-old editor at the Daniel Weiss Associates literary agency. When Brashares talks about Barf-O-Rama, what she is really talking about is boogers, “scab pie,” and even “balloons filled with diaper gravy.” This may not be the high-minded stuff that nudged this soft-spoken Barnard College graduate toward a career in publishing. But still, for Brashares, Barf-O-Rama represents the fulfillment of a dream.

“For a long time,” she says, “I’d been thinking about doing something gross.”

There are no whoopie cushions or plastic puddles of fake vomit lying around Brashares’ office; on the walls are photographs of her husband and baby. So how did someone so professional conceive of something as unapologetically disgusting as Barf-O-Rama? “I grew up with three brothers,” she explains. “They find gross things funnier than anything else.”

But as a businesswoman, Brashares has gotten into the gross-out game with a real purpose. Barf-O-Rama, she says, is all about marketing–trying to target that elusive group of boys on the verge of adolescence. The books, with their lurid covers–of a baby whose diaper is about to explode, a kid gagging on a roach-filled burrito–look like things that no parent would approve of, and therein lies the allure.

“It’s a famous problem that you can’t sell books to boys,” Brashares observes.

The Scholastic company’s insanely popular Goosebumps series of light horror has certainly won over this readership in recent years; Brashares thought she’d go Goosebumps one better. “I thought, ‘What if I do something about food? Or gross food?'” She developed a proposal for a book about a group of kids who get into a “gross-out war,” which she called The Great Puke-Off. She ran her idea by executives at Bantam Doubleday Dell. (Her company, Daniel Weiss, comes up with book ideas, packages them with writers, and then sells them to publishers, much as Hollywood producers sell to studios.)

Bantam Doubleday Dell was “reluctantly interested,” she says. Then Brashares called on an old friend, Katherine Applegate. Applegate is the Thomas Pynchon of juvenile fiction; her publisher claims to have never laid eyes on her, and she shuns interviews. She writes out of Minnesota under the pseudonym of Pat Pollari, a gender and ethnic neutral name conceived, ironically enough, so as not to offend. She gets paid a few thousand dollars per manuscript. Applegate, who is “somewhere in her 30s,” according to Brashares, agreed to give The Great Puke-Off a try. Bantam was skeptical, but Applegate turned in something so disgusting that the publishers had to take note.

Here’s an excerpt: “‘Aaargh! There are roaches in the food!’ Zoner shouted. “Allie was the first to blow. Her eyes changed from blue to green behind her glasses. Her throat started doing the gack dance. Then she emitted. She extruded.”

And in case you don’t know what a “gack dance” is, Barf-O-Rama books come with glossaries: “The spasms observable in the throat of a person preparing to gack, blow, heave, hurl, or emit.”

Bantam Doubleday Dell was disgusted enough to order 16 more books just like it, and the Barf-o-Rama series was born.

Getting in on the disgusting trend is Addison Wesley, with its Grossology series. And then there are the gross toys: The Archie McPhee Co. in Seattle is selling lots of brain-shaped gelatin molds these days, and a company called Brainstorms is moving tons of “Gurglin’ Guts Eye Balls,” which produce “oozing and sloshing noises” when shaken. These are all noble efforts, but in both scope and degree of grossness, Barf-O-Rama takes the cake, and gacks it up right back in your lap.

But won’t this stuff damage a child’s mind? Dr. Norma Doft, a child psychologist at New York University Medical Center, says, “Everything has to be taken within the framework of who the kid is. For some kids, it’s too stimulating; for others, it meets their needs.”

Even Brashares herself says, “Parents aren’t going to want their kids to have 48 Barf-O-Rama books on their shelves.” Dan Trace, manager of Copperfield’s Books’ Sebastopol store, doesn’t see this as a problem. “It’s a moderate seller,” he says. “We’ve only moved three to five of each number so far, and it came out in July of ’96. And,” he adds with a laugh, “my son will be 13 in April, and he picked one up and just said, ‘Yuck.'”

Dear old mom is probably the biggest hurdle standing between Barf-O-Rama and Goosebumps-style success. A survey last year in Publisher’s Weekly determined that mothers buy nearly half of all children’s books, with teachers buying the next 20 percent; kids themselves buy between 5 and 15 percent of the books they read, and fathers, even fewer than that.

Brashares argues that the books are an alternative to violent or scary stories. “Nobody gets hurt or killed,” she says. “It’s just that they’re pretty gross.” And how. To quote from that potential classic of underground prepubescent literature, The Great Puke-Off: “The two vomit streams hit Mr. Chapman like a fire hose.

“I stood on the seat as the tidal wave of heave rolled by.”