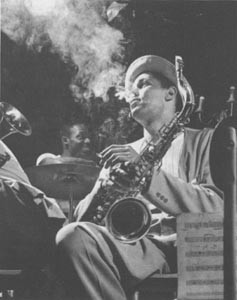 Jazz Night at the Movies

Round Midnight, is featured in rare clips at the Healdsburg Jazz Festival film archive program.

AS A LOS ANGELES kindergarten teacher, Mark Cantor may spend most days wiping runny noses and reciting nursery rhymes. But once school lets out, his role switches to Mark Cantor, music film archivist and historian in search of buried cinematic treasures.

Endowed with a lifelong love of music, Cantor, 51, has turned an all-encompassing hobby into a second full-time job. For the past 30 years, he has researched, located, preserved, and collected rare and historic music performances on film.

His vast collection of footage includes more than 4,000 individual film clips dating back to the early 1920s. It consists of mostly jazz performances, with a sprinkling of blues, country and western, and rhythm and blues.

“It all started as an outgrowth of early record collecting,” he explains. “I found I loved doing this because it gave another dimension to the music.”

Cantor will be delving into his extensive archive to combine a series of rare clips for “Jazz Night at the Movies,” a two-hour presentation and discussion that kicks off the second annual Healdsburg Jazz Festival, on Thursday, June 1. The unique footage will offer rare glimpses of about 25 noteworthy jazz performers.

“They’ll be very well-known artists. What’s unknown is that these particular performances are exceedingly rare and can’t be seen anywhere in the world,” says Cantor. “There are a number of films, [such as] many European television programs, that have not been seen in the United States and that have never been rebroadcast in Europe, which we will be screening for the first time at the Sonoma County event.”

Filmmakers, television producers, and journalists regularly rely on Cantor’s expertise relating to jazz music and its documentation on film. And Cantor taps into a specialized network of collectors, preservationists, and historians to amass footage from many sources all over the world.

These include old movies and obscure television programs. In addition, some of the footage comes from jukebox film shorts, from an era when technically elaborate machines known as “soundies” were a fixture in bars, restaurants, and roadhouses. For a few cents you could peer into the box and see a few frames of film along with the sound.

Cantor is writing a book on the phenomenon, which was a kind of 1940s precursor to MTV.

THE QUALITY of the clips that Cantor receives varies widely. “Some are crisp originals, some muddy duplicates, and some are actually videotapes that must be transferred to film,” he says, adding that he is sometimes able to improve the quality, especially by digitizing the sound.

“Each clip has its own feel, just as each jazz performance reflects the feelings of the artists involved,” says Cantor. “Passionate and exciting are certainly [a good way to describe them]. Also fascinating, swinging, inventive, instructive, sometimes even funny. And almost always compelling. Remember, we’re talking about jazz and blues, which is a music of spontaneous creation.”

Cantor, whose interest in jazz ranges from early ragtime to the most contemporary expressions of the art form, says he cannot place a monetary value on the film collection. But, he says, the music itself is a national treasure.

“It’s the most original contribution Americans have made to world culture,” he explains. “[My collection is] a part of this treasure, and I wouldn’t know how to begin valuing it in terms of dollars and cents.”

So what’s the biggest high to be had when collecting such a kaleidoscopic view of jazz history captured on film?

He cites as an example the late bebop trumpet master Clifford Brown’s only film appearance, which Cantor says “was rumored for years and only recently discovered. It’s truly exhilarating. Sort of like locating King Tut’s tomb, I guess. One loves the music and the artist, who has been dead for years. Now one can actually see him in live performance. Presto, change-o . . . the genius of Brownie lives on!”

Cantor believes the presentation will strike a real nostalgic nerve with local jazz buffs. “It’s going to be an opportunity to see historic performances by artists who have since passed away,” he explains. “This collection is their legacy–and it’s an exciting one.”

THE SECOND ANNUAL Healdsburg Jazz Festival promises to be an antidote to the endless river of smooth jazz poisoning the airwaves. The fest opens on Wednesday, May 31, with a gala dinner and solo piano concert with pianist Fred Hersch ($125), at Villa Chanticleer. Hersch also performs two sold-out shows with Jane Ira Bloom on Friday, June 2, at the Raven Performing Arts Theater. Film archivist Mark Cantor serves up a “Jazz Night at the Movies” at the Raven Theater on Thursday, June 1, at 7 p.m. The great sounds continue on Saturday, June 3, at 1 p.m. when the George Coleman Quartet, with George Cables, Victor Lewis, and acclaimed tenor saxophonist Pharoah Sanders, who played for two years with the John Coltrane Quintet, perform outdoors at Rodney Strong Vineyards ($32.50). Also on June 3 at 8 p.m., the Von and Chico Freeman Quintet hits the Raven Theater ($22.50); and on Sunday, June 4, at 1 p.m., the legendary Charles Lloyd Quartet–featuring John Abercrombie (above) and Billy Higgins (and local guitar prodigy Julian Lage)–performs outdoors at Geyser Peak Winery ($22.50). That program also features a Children’s World Music Workshop, led by Tacuma King. Tickets are available at Levin & Co. in Healdsburg or by phone at 433-3615.