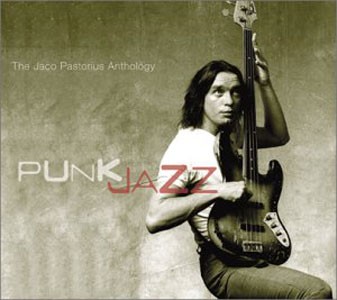 The release of bass player Jaco Pastorius’ eponymous 1976 Epic debut “was like a thunderbolt from the gods,” former DJ Ricky Schultz declares in the liner notes of Punk Jazz: The Jaco Pastorius Anthology (Warner Brothers/Rhino), the newly released two-CD collection that for the first time brings together rarities, live tracks, and material recorded for several different labels by the late, great musician.

As it turns out, a lot of folks noticed this remarkable bassist, arranger, and composer. And Pastorius, who didn’t take up the bass until age 17, enjoyed a meteoric rise at the peak of the jazz-fusion era three decades ago. His life proved short lived and tragic, however. By 1980, Pastorius began showing signs of mental illness and his career was in ruins. He became mired in substance abuse, was unable to complete recording projects, and ended up living on the streets. In 1987, back on his home turf in southern Florida, he was beaten to death by an angry nightclub bouncer.

The new anthology is a testament to Pastorius’ brilliance and is the brightest of several new CDs and reissues from the cream of the fusion-era bassists.

The 28 tracks on Punk Jazz range from a rare 1968 home demo of the Pee Wee Ellis funk song “The Chicken” to “Good Morning Anya,” from Pastorius’ never-completed 1981 solo album Holiday for Pans. In addition, there are tracks Pastorius recorded with Weather Report, Pat Metheny, Joni Mitchell, and others as well as tracks from his own solo and big-band projects.

At his best, Pastorius had a distinctive voice and a lyrical style perfectly suited for his fretless electric bass. “His grooves were transcendent and contagious,” jazz critic Bill Milkowski has noted, “combining the funk of Wilson Pickett at his most wicked with the seductive swagger of Sinatra belting ‘Come Fly with Me’ over the jaunty roar of the Count Basie Orchestra.”

Of course, fans may quibble over the anthology’s selections–and omissions–but this is a comprehensive tribute to one of the most creative figures of a much-maligned musical era.

Meanwhile, bassist Stanley Clarke is back with 1, 2, to the Bass (Epic). While Pastorius was shaking things up in Weather Report, Clarke rose to fame as Return to Forever’s young fast gun. He later released a couple of noteworthy solo albums (1976’s School Days being the best).

But Clarke–who performs at the Russian River Jazz Festival on Labor Day weekend–was never comfortable with his Promethean talent and soon settled into a series of ho-hum pop-jazz releases geared toward the vapid “quiet storm” radio market. Of late, he appears to be coming to terms with his gift and flirting with a return to the spotlight. But it’s a half-hearted return at best.

1, 2, to the Bass starts out promising enough with the hip-hop title track that features Clarke on tenor bass and rapper Q-Tip (Kamaal Fareed) delivering a spoken-word declaration of purpose about life and art. Later there is a nod to Larry Graham, the Sly and the Family Stone bassist who developed the thumb-slapping, finger-popping style that has dominated pop, funk, and rock bass for the past 30 years. Then it’s mostly nap time with just an occasional flash of the old brilliance (not even guest Joe Satriani can incite Clarke to rock). The highlight of the disc is “Touch,” an energetic live track recorded at Yoshi’s nightclub and exhibiting all the fire of the Return to Forever days.

There may be hope yet.

To get a taste of Larry Graham’s influence on Clarke and others–and you owe it to yourself to buy the newly remastered two-CD set The Essential Sly and the Family Stone (Epic/Legacy)–check out The Ozell Tapes: Marcus Miller Live, the Official Bootleg (Telarc). Probably no modern bassist has benefited from Graham, Clarke, and Pastorius’ groundbreaking techniques as much as Miller, the in-demand session player and former Miles Davis sideman (Tutu and Music from Siesta). While much of Miller’s recorded work is marred by slick studio production and limited originality (he cribs liberally from his predecessors), this follow-up to his Grammy-winning 2002 album M2 captures a grittier road warrior on two CDs of solid funk and jazz grooves.

Harder to find, but well worth the search, are seven new reissues on the Bardo label of 1990s material from the underrated Swedish bassist Jonas Hellborg, whose credits include PiL’s 1986 hard-rock classic Album, as well as fusion projects with John McLaughlin, Bill Laswell, and Ginger Baker. Originality and musicality abound here. A good starting place is 1999’s Aram of the Two Rivers, a reflective album recorded live in Syria with Middle Eastern players.