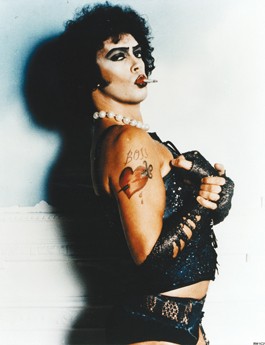 'Rocky Horror' proves that camp has no age

Ever since The Rocky Horror Picture Show made the transition from the stage to the silver screen in 1975— with a resounding orgasmic whoop from audiences all over the world—the tale of a raucous group of “sweet transvestites” from Transylvania has been a cult favorite. Fans have been singing along with a wide-eyed Susan Sarandon and fantastically salacious Tim Curry for years, with annual viewings usually taking place around Halloween. Thus, it comes as a pleasant surprise that after a 10-year hiatus, Petaluma’s Phoenix Theater has decided it’s time for a summer romp with Dr. Frank-n-Furter and crew.

The screening will be, per tradition, accompanied by Bay Area troupe Barely Legal, Rocky Horror Picture Show aficionados who have been presenting the show since 1995. Phoenix promoter Jim Agius says the enthusiasm that comes with the performances is the best part of live showings of the film. “Having only seen RHPS live once, my favorite part of the experience was how perfectly timed and wonderfully inappropriate some of the live audience shouts were,” he says.

Anyone who has ever attended a live performance of the revue can attest to the timing and raunchy dedication to the show’s plot by the audience; many fans choose to either dress up as a character or just dress as provocatively as possible.

Written by Richard O’Brien, our story begins when young lovers Janet and Brad are forced to seek refuge in an eerie castle after their car breaks down. They are met by Dr. Frank-n-Furter and his companions, and naturally, a handful of risqué shenanigans follow. The show, originally produced in London in 1973, already had a reputation for being a rambunctious crowd-pleaser by the time it reached American shores in 1974.