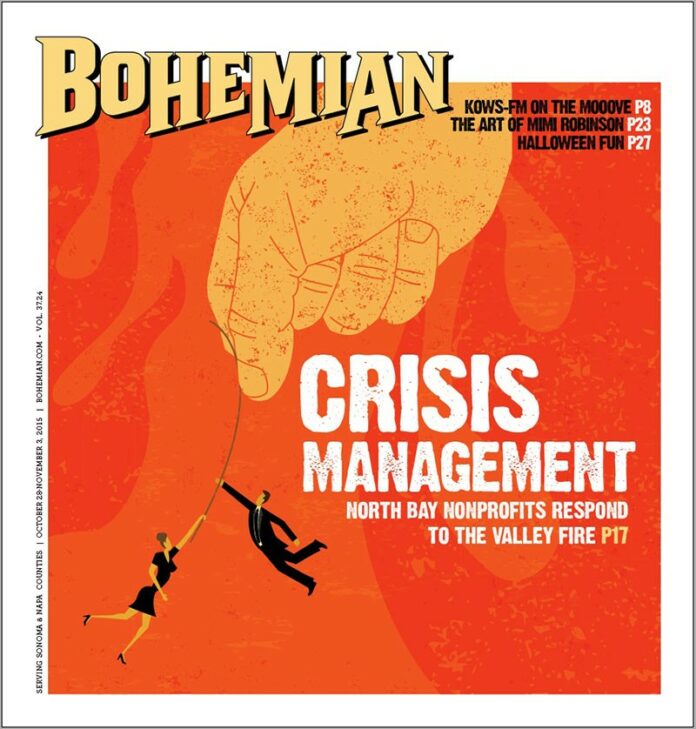 When the first flames of Lake County’s disastrous Valley Fire broke out on the afternoon of Sept. 12, firefighters and law enforcement were naturally the first to respond.

As the fire grew and more homes were lost, the Red Cross and good samaritans stepped in to provide shelter and aid those left homeless. As the damage mounted and the fire raged, Gov. Brown declared a state of emergency, and Napa County activated its emergency volunteer center Sept. 16 to help manage the growing flood of displaced residents and donations.

Coordinated by San Rafael’s Center for Volunteer and Nonprofit Leadership (CVNL), the group played a critical, if unheralded, role during the fire and its aftermath. While employees of the nonprofit and its volunteer network weren’t in harm’s way, they provided critical services to those who were.

“They were great,” said Carlene Moore, executive director of the nonprofit Napa County Fair. Calistoga’s Napa Valley Fairgrounds was the site of disaster relief and shelter for fire victims. “They were a tremendous help.”

Within hours of the outbreak of the fire, local volunteers stepped up to help. When CVNL arrived on the scene a few days later, Moore was impressed by the way the organization supported and worked with volunteers already onsite, rather than”taking over” and pushing them aside.

“I can’t say enough about what saviors they were.”

The organization has been around for 50 years serves as a nonprofit service provider for other nonprofits in the form of consulting work, training seminars and executive search assistance to the many organization that do not have in-house expertise. But when a disaster like the Valley Fire or Napa earthquake strikes, they play a more urgent role as emergency volunteer coordinator for Marin and Napa counties. Sonoma and Lake counties do not outsource their emergency-volunteer coordination.

“It comes into action the moment the state declares an emergency,” says Peter Rodgers, marketing and communications director at CVNL.

Napa County has its own office of emergency services, but given the scale of the Valley Fire, the county needed to activate CVNL’s disaster-relief-coordination role in order to meet the crisis.

The group’s first order of business was to manage the truckloads of donations that were piling up at the fairgrounds. It turns out there were too many clothes donations and not enough items that were in greater need: batteries, flashlights, coats, coolers, sunhats and beanies. They got the word out via radio, TV and print media about what donations were needed, sorted them and then with the assistance of the national nonprofit Points of Light (remember President George H. W. Bush’s “thousand points of light”?) and their partner UPS, they delivered the goods to fire victims once they were allowed back into the fire area.

Rodgers, who started with CVNL as a volunteer more than 10 years ago, says his group also helped deploy the scores of volunteers who were lining up to help. The emergency volunteer center is where people who want to help are directed. The Red Cross was at capacity and had been turning away volunteers, something that was upsetting to some of those who wanted to help.

“They could see the need was still there,” he says.

Because of the North Bay’s vast network of nonprofits and volunteers, help was in large supply. Some of the many nonprofits that rose to the occasion include the Boys & Girls Club, Napa Valley Community Foundation, Wine Country Animal Lovers, Calistoga Wildcat Athletic Boosters, Sunrise Horse Rescue, OLE Health, Community Action of Napa Valley, and the Upvalley Family Center. Given Napa Valley’s many restaurants, food was not in short supply. Rodgers says that by Sept. 22, local restaurants had served more than 20,000 meals. While they’re not exactly a nonprofit organization, even the local chapter of the Hell’s Angels turned out to help and prepared a barbecue lunch for firefighters.

“When you see humanity stepping up to help and you get to be part of it, it’s a really beautiful thing,” says Rodgers.

Meanwhile, if El Niño storms this winter live up to the hype, expect CVNL to spring into action again once the rivers rise and the mud starts sliding.

“The risks this fall and winter are quite significant,” says Rodgers. “This may be the next episode we have to deal with.”—Stett Holbrook

Jeffrey Hoelsken saw the glow of the Valley Fire on Sept. 12. The executive director of the Sunrise Horse Rescue was hosting the nonprofit’s annual fundraiser in Calistoga when the fire broke out that evening.

“It was a scary sight,” recalls Hoelsken. “We were very close to it from the beginning.”

That night, the St. Helena–based horse sanctuary began taking in animals from evacuees, and by Sunday their staff of trained volunteers was venturing out to pull animals out of the fire line.

“Anytime something like this happens, there’re people who naturally mobilize towards the danger to help,” Hoelsken says. “Our volunteers were very ready to go.”

With extensive training on their side, the staff at Sunrise was able to approach many distressed horses and move them to the Middletown Animal Hospital. They also dropped hay and water to animals left behind.

Sunrise founding board member and horse trainer Tracee Beebe recalls seeing one horse that would not come out. Beebe recognized something was wrong and, as she approached, saw the animal was impaled with a fence post. She called a vet and waved down two men with a trailer who were out helping any way they could. One of the men had just lost everything in the fire. Together, they saved the horse’s life.

“It was really intense to be up there at that time,” Beebe says. “But that’s why we were there: to help life continue in the midst of that.”

Back at the sanctuary, 20 horses (and two goats) came to stay with Sunrise, and for a few it will become their forever home. Hoelsken credits the outpouring of donations and support, from food and cash donations to volunteer help, in saving many of these horses. “We were blown away and so grateful that the community responded the way it did,” he says.

Operating since 1948, Mentis, formerly known as Family Service of Napa Valley, is the county’s oldest nonprofit. Its focus has long been to provide accessible, affordable mental-health care to the young, the elderly and everyone in between. When the Valley Fire broke out, Mentis got the call from long-time partners Up Valley Family Center in Calistoga, requesting mental-health services.

“I wasn’t surprised to get the call, given the news,” says Mentis executive director Rob Weiss. “On Monday [Sept. 14], we had staff from different programs come up” to the evacuation center at the Calistoga fairgrounds. That staff included therapists, case managers and crisis-intervention workers

“We were the first organization to get up there; then it really became a collaborative effort,” Weiss said.

Napa County Health and Human Services soon took the lead and coordinated ongoing shifts for workers from Mentis and other groups to have mental-health personnel at the fairgrounds around the clock.

The staff provided screenings, assessments, referrals and counseling to help victims stabilize emotionally and get access to the resources they needed.

“It was all about giving people support when they wanted it,” Weiss says.

Robert Francis, a mental-health worker with Mentis, was on-site for a week straight, working 12 to 14 hours daily with dozens of families. Francis remembers one story in particular. A family, who knew their house was lost from the beginning, went back to grab their safe, full of valuables and sentimental artifacts passed down from generations. When they brought it back and opened the safe, everything inside was ash.

“I was with the father and I could see in his eyes that he was devastated,” says Francis. “I told him, ‘It’s OK to be upset. Your life has been turned upside down.’ I had to let them know their emotions were valid, and that they were going to get through this. They got out of there alive, and that’s what matters.”