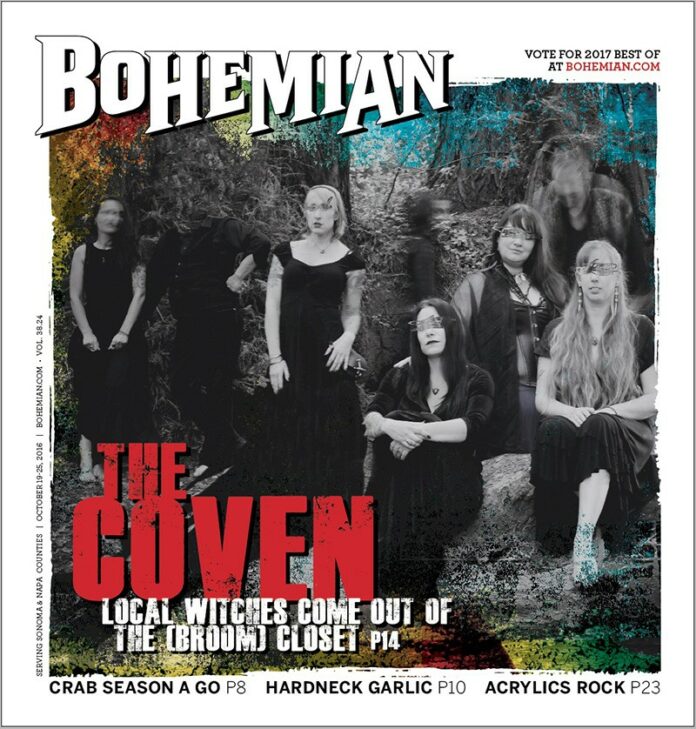 Growing up in a religious family that viewed anything other than Protestant Christianity as satanic, Preston kept his interest in magic and witchcraft a secret at home. Often, he’d disguise his library books—Earth, Air, Fire & Water and To Ride a Silver Broomstick—with book covers, hiding them from his family and the church they belonged to.

Preston grew up in a community that was predominantly people of color, many of whom were first- or second-generation immigrants. Religion, he says, was no passive activity, not something one attended only on holidays like Christmas; faith ran deep, and it helped tie the community together.

“It’s a source of strength, it’s a source of community, it’s a source of resiliency,” says Preston, who, like many witches interviewed for this story, prefers to use only his first name. “Those ideas of a spiritual path being integral to human well-being were instilled in me at a very young age. So it’s not that faith wasn’t important, because it was for me in my personal experience; I just had religious revelations and experiences that were outside of the confines of the type of Christianity that my parents were practicing.”

Now some 20 years later, Preston lives in Vallejo and identifies as a witch and a priest-ess—he prefers “priest-ess” with a hyphen because it “allows me some gender fluidity but still calls back on those old and current days of being in witch priesthoods.”

Many North Bay residents are carving pumpkins, scouring thrift stores in search of 1980s threads for Halloween costumes of their favorite Stranger Things characters, or building Dia de los Muertos altars to remember their beloved dead. Meanwhile,
Preston and thousands of other witches are preparing for the
Oct. 31 pagan festival of Samhain. And, no, the festivities do not include eating babies.

For many witches or pagans, Samhain—an ancient Celtic festival with roots primarily in Ireland and the Scottish Highlands—is recognized as one of the most magical times of the year, a time when the veil between the living and the dead is thinnest. Some prefer the term “witchy as fuck.” The number of people celebrating the season and adopting the idea of witchcraft as a feminist alternative to mainstream spirituality is growing. So, too, is the number of ritual participants.

So what does a pagan ritual full of witches look like?

“Actual rituals look like a gathering,” says Gwion, a Sonoma County witch and priestess. “There’s often a recognition or summoning of the various elements: water, air, fire, the earth. There’s recognition of the ancestors that have either walked this land or have walked in our tradition before us. There might be an invocation of the various gods and goddesses that may be associated with the time of year or with a specific witchcraft tradition, and often there is a piece of personal work. Joseph Campbell liked to say that dreams are individual mythologies and mythologies are collective dream work. And that’s something I very much believe ritual is.”

Sometimes these gatherings take place around a fire or seasonal altar and include symbolic offerings. Sometimes participants dance or sing or are led through guided meditations.

Gwion grew up in England, attending “very buttoned-down Church of England schools” and came to witchcraft after dabbling in other religions through his 20s and early 30s. At one point, he focused on Buddhism, “literally sitting at the steps of a Tibetan Rinpoche for years.” It was later, after he married his wife, Phoenix, another witch and priestess, and traveled with her to his native England, that he felt a powerful connection to his ancestral pagan roots.

Phoenix came to magic and witchcraft through a different route. Raised without religion, she had her heart broken for the first time at 15 and began searching for a religious belief system to comfort her. She first felt an affinity with a statue of St. Elizabeth but was turned off by the patriarchal elements of Catholicism. She made her way through various religious texts before she came across a book of spells.

“I thought, ‘Maybe I just need to do a spell [on my ex] and get him to come back to me. Maybe it’s not religion!’ So I did try that and it did work, but it was so bad,” she says with a laugh. “Then I found another book, [Buckland’s] Complete Book of Witchcraft by Raymond Buckland, and it talked about the goddess, and I thought, ‘Oh, that’s what I was missing.”

Preston, Gwion and Phoenix are a part of a large and growing community of North Bay witches and pagans. They’re primarily associated with the “reclaiming tradition,” which reaches back about 40 years, though it borrows from many pre-Christian traditions. Many other witches in the region identify as Dianic witches, Gardnerian witches, Jewish witches, hedge witches, kitchen witches, druids, followers of the Feri tradition, heathens or Wiccans.

Each group has its own practices and perspectives, but the common core is a connection to the natural world and the cycles of the year. In addition to North Bay Reclaiming, other organizations like Sonoma County Pagan Network and Diana’s Grove host rituals and other events that are open to the public.

The greater reclaiming community, which has groups across the globe, differs from other religions in that it is rooted in magical activism. The organization also uses a non-hierarchical, consensus-based structure. This means there is no high priest or priestess, and instead of focusing on personal enlightenment, like so many New Age spiritual practices, a strong emphasis is placed on engaging with communities to advocate for various social-justice issues, as well as working toward inclusivity within the organization itself.

“I will set an intention, something that I want to manifest in the world, something I want to change in the world, some way of collecting all of the pieces of the puzzle that might result in that change—that’s what I call spell work,” Gwion says. “That might mean, for me, being on the front line of a political action, that might mean educating people on what transphobia is or what homophobia is, or working with people to learn what witchcraft is or isn’t.”

A lot of discussion these days focuses on race, adds Phoenix, and how people of color are not well represented in the community.

Some gatherings that appear to have “witchy” feminist leanings have recently come under scrutiny for their lack of racial diversity and economic barriers. An exposé on Spirit Weavers in the July Harper’s Bazaar criticized the gathering as one of blatant privilege, full of mostly straight white women with enough financial security to afford the $700 weekend event.

These are the very issues reclaiming continues to address, which can be complicated in a relatively new tradition with no ancient religious texts to refer back to.

“I see the larger pagan witch community as very culturally appropriative,” Preston says. “There are not many pagan traditions that I feel called to, because they seem void of political and social-justice interest.”

OUT OF THE (BROOM) CLOSET

Witchcraft is becoming more understood and less stigmatized as more witches step out of the “broom closet.” Recent articles about witchcraft in mainstream publications like Wired and the Huffington Post online journal have painted the tradition in a positive light and as one of feminist empowerment instead of evil sorcery. Yet some common stereotypes linger, thanks to shows like Supernatural (which many witches actually love) or films like 2015’s The Witch.

“The common myths and understanding of witches is that we sit around naked inside burning pentacles with a sacrificial animal or child, and we’re doing work for the devil and that everything we do is malevolent,” Gwion says.

But the devil, Phoenix points out, is a figure of the Christian faith, and people who are not Christian are not likely to believe in him or his power. Satan has no place in the lives of most witches.

“The other side of it,” adds Gwion, “is that we’re charlatans and we’re selling snake oil and that nothing we do works.”

And although the United States protects freedom of religion, several states, including Michigan, North Carolina, Ohio and Pennsylvania, still prohibit the practice of “fortune-telling” services, laws that some say restrict the right to practice witchcraft.

The aftertaste of the Dark Ages is even found in our liberal West Coast bubble. Community members blocked the opening of an occult shop in Southern Oregon in September, with one local resident claiming that “if it brings in occult practices, it will develop into satanism, which practices the skinning of cats.” And closer to home, a Fort Bragg man was arrested this summer for planning a “witch hunt” against a local pagan gathering. According to the Anderson Valley Advertiser, his public social media call for co-conspirators drew on language and practices from the Europe of old: “Shall it be a burn day? Possible [sic] a river cleansing?”

THE WITCH NEXT DOOR

The thing is, most witches are just like everyone else. Preston teaches environmental education at a zoo and works as a substance-abuse counselor for gay men in early stages of recovery while he completes a PhD program. Gwion works in marketing. And Phoenix is a small business owner; to date, no cats have been skinned at her shop, Milk & Honey, in Sebastopol.

“We’re normal people, we’re abnormally normal,” Gwion says with a laugh. “I have a day job. I take out the garbage.”

Then what of the common perception that witchcraft and paganism dabble in darkness?

“I think the reality is that magic is gray; it comes to a question of ethics about what’s OK, and that is so personal.”