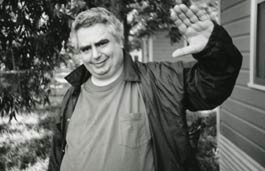 Book of Daniel: If ‘Devil’ is scary, it’s only because it’s so hard to watch someone so talented go so crazy.

With drawings in the current Whitney Biennial, a gallery show at New York’s Clementine Gallery, a new compilation of his songs due this month and a documentary film, The Devil and Daniel Johnston, singing the praises of his creative output, Daniel Johnston is certainly the toast of the town. This spring alone he’s been profiled in the New York Times, Spin, Pitchfork and Interview, among other publications.

It’s hard to know how to feel about this if you are a Daniel Johnston fan. On one hand, it’s exciting, because it means more people will hear, play and love his songs. But it’s difficult, too, because those songs are filled with so much naked sincerity that you want to shield Daniel from the bullshit media circus, and you want to protect the integrity of his work from being reduced to a snappy two-paragraph blurb in a fashion magazine.

Daniel Johnston, now 45, was born in Sacramento; his family moved to the northern panhandle of West Virginia when he was still young. From his parents’ perspective, Daniel was an A+ layabout who wouldn’t do chores and had no interest in contributing to the community. He just wanted to draw, make Super-8 home movies and sing songs.

All of this happened in his family’s basement, where he constructed a lair of comic books, Magic Markers, action figures, Beatles albums and other pop-culture totems. This was of grave concern to his parents, faithful members of the Church of Christ who valued hard work and self-sacrifice.

Daniel’s feelings on the matter surface in his song “Story of an Artist,” released in 1982: “Listen up and I’ll tell a story / About an artist growing old / Some would try for fame and glory / Others aren’t so bold / Everyone, and friends and family / Saying, ‘Hey! Get a job! Why do you only do that only? / Why are you so odd? / We don’t really like what you do / We don’t think anyone ever will / It’s a problem that you have / And this problem’s made you ill.'”

Thirty-some years later, Daniel again lives with his parents, because he can’t take care of himself. In his early 20s, he was diagnosed as being manic-depressive, a condition that worsened over the following decade, leading to a number of dramatic and nearly fatal episodes. Jeff Feuerzeig, the director of The Devil and Daniel Johnston, was able to cull from literally hundreds of hours of audio tape and home movies that Daniel, an obsessive recorder, amassed over the years; in the documentary, we see him grow from a precocious middle-schooler to a bloated man-child right before our eyes.

After leaving West Virginia in his early 20s, Daniel sold corn dogs with a traveling carnival, eventually settling in Austin, Texas. He set about infiltrating the local music scene by distributing hand-dubbed cassette tapes to band members, pretty girls and music critics. He wormed his way on to an MTV special and experienced his first official brush with fame, causing a stir at the McDonald’s where he was employed but performed minimal work. As his mental well-being deteriorated and Daniel grew increasingly obsessed with the devil, the underground following for his cassette tapes grew.

The friends and critics interviewed in The Devil and Daniel Johnston all cite the brilliance of his songwriting, placing it on par with the Beatles. Daniel deftly manipulates melody and hooks in his music, but even his more brilliant moments are decidedly radio-unfriendly. Growing up, did you ever sing into a tape recorder just for the fun of hearing your own voice? Daniel Johnston did; unlike most everyone else, he never stopped.

The ultra-lo-fi quality of his basement and garage recordings give them a startling immediacy, as if he were writing and singing those songs just for you. He sang about failure, both romantic and artistic, in a squeaky, boyish voice that wasn’t helped by an unstable tape recorder speed, and even in his sweetest love songs there’s the subtext of a Christian morality play: true love wins in the end because goodness wins in the end. The reason Daniel Johnston’s recordings are so wonderful is precisely because they could never be Top 40 hits. Many musicians have covered his songs, but their intimacy and power gets diffused in the process.

One thing a cynic could deduce from Daniel’s current popularity is that the slow-burning tragedy of his situation increases the value of his art and music; it certainly infuses them with bittersweet poignancy. You can quibble for hours over the relationship between Daniel’s creativity and his mental health, but the two have co-existed for all of his adult life and are inextricable from his reality.

Daniel Johnston the artist is making pretty decent money these days. His drawings, typically executed on unlined 8-1/2-by-11-inch paper in candy-bright markers or watercolor, can sell for $1,000 or more–and the man is a geyser of art, so there’s plenty more where that came from. (Citing Duchamp among his influences, Daniel thinks of them as “doodles.”) His family has been able to use the proceeds of his art sales to build a cottage for him right next door to his parents’ house.

If lack of self-awareness is a defining factor of outsider artist, then Daniel Johnston cannot be one. His creative output is saturated with self-awareness. And as far as fame goes, he went after it–admittedly in his own idiosyncratic way–with a grappling hook. He may not regularly dine with Matthew Barney and Björk, but Daniel Johnston is no rube. He has tenuous social ties to Sonic Youth, and if that’s not a factor of insider-ness, nothing is.

Blender magazine called The Devil and Daniel Johnston “the scariest movie of the year.” If the movie is scary, it’s because it’s hard to watch someone so talented get so crazy. Here’s this skinny, goofy guy trapped in the body of a pot-bellied grizzled man with type II diabetes who subsists on a diet of hamburgers, Coke and Doral 100s. Years of medication have ravaged his body, and the parents he depends on are now in their 80s.

In the liner notes to Discovered Covered, a two-CD set of Daniel’s songs that came out in 2004, Jad Fair of Half Japanese writes, “You can add ‘est’ to the end of everything Daniel does. His happy songs are the happiest, his sad songs are the saddest.”

The extremes can be tough to process. Why are we looking at Daniel’s story and making it sad and scary? He’s an artist who loves to create, and he looks into the deepest, blackest lungs of evil and pulls out a beam of joy. Simply put, Daniel Johnston is the est-i-est.