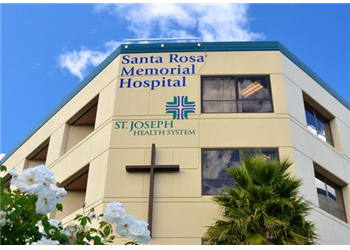 On Sunday morning Oct 15, as patients flooded into Santa Rosa Memorial Hospital, medical staff struggled not only to keep pace with the influx but also with the anxiety that they, too, would lose their homes. More than 130 doctors and nurses lost their homes in the blaze. As evacuation orders are lifted and people return to their homes or what is left of them, this number is expected to rise.

Santa Rosa Memorial Hospital has seen 1,200 patients this week, compared to a typical weekly average of 700. SRMH was the largest trauma center in the three counties affected by the North Bay fires and took in patients from Kaiser and Sutter Hospitals, which were closed. Sutter opened today. Oct. 17 and Kaiser has partially reopened.

Cambria Reese, a registered nurse who was working the night shift when fire broke out, discovered that her home and her parents’ home near Larkfield were in danger.

“Thankfully a neighbor contacted them and got them out,” Reese said. “I eventually reached them after they evacuated, but there certainly was a time of uncertainty.”

Reese spent a few nerve-racking hours waiting for contact from her family. In the meanwhile, she focused on her work and relied on her faith to get her through.

“We started having patients who were listening to the news and getting anxious who had family members evacuated as well,” Reese said. “I just tried to be there and stay calm for them.”

Reese was one of many working to care for victims with the knowledge that they, too, were affected by the fire.

“A lot of the people working on the nighttime shift were unable to get to their homes and couldn’t go for their pets and valuables,” says Todd Salnas, President of St Joseph Health Sonoma County.

Like the rest of the community, healthcare providers at SRMH will now struggle to house its employees.

“We’ve had a housing issue that has been well documented in this area for a long time,” Salnas said. “We’re looking at a short-term way so people can have a roof over their heads so they can carry out their duties here at the hospital as well as taking care of their families.”

To cope, SRMH has been running two additional shifts a day to handle the influx of patients.

“We started to get burn victims at 2pm,” said Dr. Brian Schmidt, Medical Director of Santa Rosa Memorial Hospital. “There were a lot of patients in the hall and there were five major burn victims in the first four hours.”

The burn victims were transferred to UC Davis and Saint Francis.
“We had a gentleman who was found in his pool, burned on his head and his hands,” Schmidt said. “He lost his wife. One of our radiologists was trying to save his dog, which got caught in the terrible fire on both sides of the driveway. He risked his life trying to save his dog, but he became one of the victims around 7 or 8am.”

Despite the tragedy wrought by the fire, SRMH welcomed 36 babies as closures of Kaiser and Sutter Hospitals brought mothers to deliver their babies at SRMH.

“This was three times more than normal of our normal expected birth rate,” said Chief Nursing Officer Vicki White. “This is going to be a great story for them when they get older.”

The long-term adverse health effects of smoke and particle inhalation will take time to determine. As flu season approaches compromised, immune systems may be compromised as well.

However, first responders, who have inhaled fumes from melting paint, wood and metal face a significant health risk. Until the smoke risk has cleared, doctors still recommend wearing N95-rated masks.