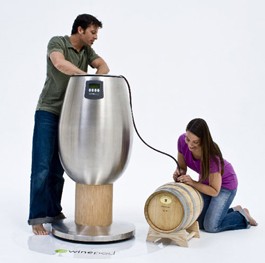 New machine allows the home winemaker to vint all year round

Forget soil. Forget irrigation. Forget weather. Forget purple hands in October. We’ve entered the 21st century, and we’ve hit the ground running. Just eight and a half years in, and already there’s a computer that can make wine year-round. Sort of. Developed in Silicon Valley, the WinePod allows human involvement—requires it, actually—but this gizmo’s got the digital brains to virtually eliminate all human error and the blunders that can ruin a batch of homemade bucket-wine.

The machine, invented in 2005 but only now going mainstream, is a 4-foot-tall R2-D2 look-alike with a 15-gallon capacity. It is clean-lined and quicksilver-sleek, and will add an industrial sex appeal to the modern dining room. And, unlike any human winemakers we know of, it can make 12 vintages of wine per year—winter, spring, fall or summer.

Here’s how it works. You buy a WinePod for a tad over $4,500, which includes a 15-gallon bundle of grapes from ProVina, WinePod’s founding father, which keeps about 50 tons of frozen Pinot, Cab and Syrah grapes in a cold-storage warehouse in Richmond. (Successive grape orders are around $700.) Remove the WinePod’s lid and dump the grapes into its steel-lined belly. Flip a switch to activate the automatic press, which squashes the grapes with 16 pounds of pressure per square inch. The skins and pulp are easily removed via the pomace basket.

Add dry yeast and the marvelous brix sensor. This complex, wireless gadget about the size of a Walkman (remember those?) soaks in the stewing wine and communicates with the winemaker via a PC application called WineCoach. This system provides breaking news updates from the belly of the WinePod; if there seems to be distress and unrest, the WinePod will suggest adding some yeast nutrient, another accessory.

Greg Snell, who initially conceived of the idea, says the WinePod is the first home-winemaking kit to bring commercial winemaking capabilities to the mini-batch level. Most home winemakers have only a plastic bucket with a spigot at the bottom to work with, making temperature control, for one, an almost unmanageable issue, but the brix sensor directs the WinePod in carefully controlling the temperature of the fermenting wine as needed, with no human input required.

But not every function of the WinePod is automated.

“The person is still the winemaker,” says Snell. “I was worried at first that people would think this is a winemaking machine, where you don’t have to do anything. That’s what a custom crush facility is, but the WinePod is the real deal. You’re making the wine. The software just serves as a crutch to keep you from making dumb mistakes.”

In Capitola at the north shore of Monterey Bay, just across the mountains from the WinePod’s Silicon Valley origins, Cava Wine Bar has integrated a WinePod into the cool, jazzy decor of the space. The staff and several customers have already made one batch of Napa Cabernet, now at rest in the eight-gallon oak barrel that comes with the WinePod.

As the wine ages, the winemakers will communally add oak chips, tannin powder and other optional elements from the WinePod accessory kit. Snell and his colleagues hope to interest other wine bars nationwide in having a WinePod on the premises, to expose wine enthusiasts to WinePod winemaking without having to make the immediate plunge of purchasing their own.

Snell has received a small amount of criticism from winemakers who claim that they learned to make wine the hard way, and that the WinePod allows one to bypass all the challenges. Cava Wine Bar co-owner Zach Worthington, who has seen the machine do its thing, disagrees and says there is nothing false about making wine in the WinePod.

“It teaches you winemaking exactly as it happens anywhere else, just on a small scale. You start with your fresh fruit and end with wine.”

Bad advice is prevalent in the home-winemaking community, says Snell, and a batch of wine gone south due to a simple error can easily turn a frustrated winemaker away from the hobby for good. With the WinePod, there’s no goofing up, as long as one regularly sits down at the computer to receive updates and advice. The WinePod, says Snell, will also bridge the intimidating gap that so often lies between a fine finished bottle of wine and the average Joe who once never could have imagined making such a product himself.

“We’re trying to demystify wine and winemaking, take the snobbery out of it and make it understandable,” Snell explains. “Even wine aficionados who haven’t made wine will not have the wine knowledge and appreciation of someone who makes it.”

Even if a robot does half the work.