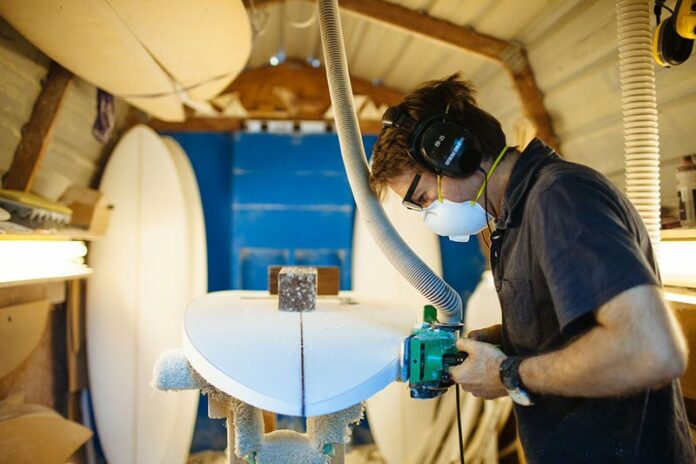 Surfing in Sonoma and Marin counties is dodgy in the best of times, but spring is downright dismal. Northwest winds scour the coast, rendering any waves that straggle ashore into ragged, unsurfable junk. The constant onshore blow dredges up deep, cold water to give surfers brain-
freezing headaches as they duck under waves.

But there are not many waves worth surfing this time of year anyway. Spring is a season of transition, and northwest swells from the Gulf of Alaska have all but dried up, and Southern Hemisphere swells have yet to make their way to our shores.

Still, Jamie Murray manages to stay connected to the ocean during the windy season inside his 108-square-foot shop tucked behind his home in Santa Rosa’s west end. Murray, 40, is a surfboard shaper, one of just a few in Sonoma County. If he can’t ride a surfboard, he can make one. He doesn’t advertise or sell his boards in surf shops, but the word has spread about his handiwork through the North Coast surf underground.

“He’s talented,” says Jay deLong, 42, a veteran North Coast surfer who has ordered several boards from Murray. “He’s really a craftsman. He’s got curiosity, and he’s not afraid to fail. He’s that classic person who is enjoying the ride.”

As an in-demand shaper, Murray spends a lot more time in his shop than he does in the water. Once he closes the shop door, he disappears for hours in a private world of tools, foam dust and hydrodynamics.

“My wife and kids have to get me,” he says. “There’s no possible way I can keep track of my own time.”

Murray is an unlikely shaper and surfer. With his short-cropped hair, glasses and wry smile, he doesn’t fit the surfer stereotype. He looks more like
an English teacher. Which he is. He was a founding faculty member at Sonoma Academy.
His writing skills and sense of humor come across on his blog at www.headhighglassy.blogspot.com:

My kids now think I’m effing with them at bedtime. “How could it be?” They plead, pointing out the window. “It’s still light outside!” And they’re correct, but it’s also 8pm and daddy needs a Manhattan, so off they go. Take that, spring!

Murray grew up in Connecticut, a state with a nearly nonexistent surf scene. Because there were no local surf shops, he and his friends surfed scavenged old boards.

“It was pretty retro before retro was cool,” he says.

Murray got used to those outdated designs, and when he moved to California in the 1990s after college in Colorado, he wanted to rekindle his love of surfing. By then the surf industry was focused on short and thin boards patterned after the high-performance, competition-style boards surfed by the pros. For someone used to riding boards with more foam and width, they were no fun. Murray asked a Santa Cruz shaper to make him one more suited to his liking. He got turned down. So Murray decided to make his own.

THE ART OF SHAPING

For all their graceful lines and high-gloss finishes, surfboards begin life as an unremarkable plank of polyurethane foam called a blank. It’s a shaper’s job to artfully saw, plane and sand away the blank to reveal a surfboard shape within. Once the blank is shaped to the shaper or client’s specifications, colors, decals and fin boxes are added, then it’s layered with resin and sheets of fiberglass. Before it’s ready to be surfed, it gets sanded and polished.

There are mass-produced, computer-cut surfboards, but since surfing’s rise in popularity in the 1950s, there has always been demand for handmade surfboards. Other than custom bicycles, there are few sports where you can work with a designer and craftsman to create a piece of equipment built to your specs.

Back home in Connecticut, Murray’s dad, like many Yankee dads, had a basement workshop that kept him busy through the long winters. As a kid, Murray made his own skateboards because his father wouldn’t buy something he could make himself.

“If you wanted it, you were going to have to make it,” Murray says. “That was his philosophy.”

And it became his philosophy, too. So Murray got a blank and set to work making his first board.

“It was totally shitty and came out terrible,” he remembers.

But he learned from his mistakes, and the next one was better. So was the next. These were the early days of the internet, and there wasn’t much information available on surfboard shaping. To expand his knowledge, he spent time observing a few master shapers and asking questions. After making 30 or so boards, he started to get the hang of it.

By this time, Murray had moved to Santa Rosa and taken a job at Sonoma Academy. During the day he taught literature and writing, and at night and on weekends he continued to make boards and surf them in the heavy waters of the Sonoma and Marin coasts. Eventually, someone saw one of his boards and asked if he’d make one for him.

“I was loath to take orders,” he remembers. “I really didn’t know what I was doing.”

But his boards got better, and soon he had a growing list of customers. Paddle out at Salmon Creek or Dillon Beach, and chances are you’ll see a board with a dragonfly decal, Murray’s logo.

It turns out his fondness for the retro boards of his youth—wide, thick ones designed for easy paddling and their wave-catching ability rather than aerial maneuvers and competition—fit right in with the North Coast’s surfing demographic. Murray sums up the area’s surfers with one word: “Old.”

Most surfers here have been around for a while. The area is challenging and doesn’t offer many beginner-friendly spots, so there aren’t many first-timers or young kids in the water. Old guys—and girls—rule.

Whether it’s nostalgia for old designs or simply the desire for a board that will help surfers paddle through the North Coast’s notoriously heavy currents and surf, Murray’s designs are tailor-made for the region.

He ought to know. He’s been surfing the North Coast since 1966. “You want something to get you around. Bigger boards are better.”

Several of Murray’s shapes were created with local surf breaks in mind. Winemakers talk about terroir and how their wines reflect the local soil and climate. Murray’s boards reflect the power and mercurial nature of our stretch of coast. While springtime is rough, the North Coast can get good waves. Sometimes really good. And when it’s on, you want the right board for the job.

Murray’s “Pit Boss” was created to surf a powerful, barreling wave near Dillon Beach that requires a long paddle over notoriously sharky waters. His “Clover” design is suited to Salmon Creek when a winter groundswell is pulsing and the waves get steep and hollow. He also makes “Broadswords,” longboards suited to both smaller, mushier summertime waves and big winter surf .

There is demand for high-performance surfboards, but Murray usually steers those customers to Ed Barbera, a master shaper who makes boards behind Bodega’s Northern Light Surf Shop.

“He does such a killer job with them,” Murray says.

Though people have been surfing in Southern California and Santa Cruz since the early 1900s, surfing is relatively new to Sonoma and Marin counties—mainly because it’s so damn hard to surf here and there is more consistent surf just about everywhere else in the state.

“Twenty years ago, the Sonoma Coast was the frontier,” says veteran surfer deLong.

DeLong counts himself as the first wave of young surfers in Sonoma County. There were a few older surfers like Rasmussen who surfed back then, but they were few in number and some scampered farther north when their solitude was disturbed by newcomers paddling out.

“Back then, there was hardly anyone in the water,” he says. “You’d be happy if there was someone else out there with you.”

Murray says most surfers he meets simply want to get into the ocean and enjoy the area’s natural beauty and bag a few waves along the way. He includes himself in this group.

“As older, experienced surfers, we’re looking for a wilderness experience. It’s not about wave count or blasting big airs.”

He says he enjoys working with surfers, half of whom are women, to bring their ideas to life. What do customers want from a board?

“It’s got to handle everything from ankle high to double overhead. Our conditions are wild and unpredictable. [Shaping for those conditions] is a fool’s errand, but that’s part of the challenge.”

He much prefers custom shaping to sticking a board in a shop for someone he’ll never meet.

“I like shaping for people I know. It’s more fun to imagine who I’m making it for.”

Murray isn’t planning to quit his day job. He figures he makes enough from each board he shapes to buy a good sandwich. Every dozen boards or so he’ll have enough money to make a board for himself. Which he apparently does a lot. There are boards stacked in and around his house like cordwood.

What is it that compels him to shape in his tiny shop and lay awake at night thinking about foils, rockers and hulls?

“My wife asks me that all the time,” he says, smiling. “It’s my quiet time, and it’s nice to do something physical after teaching all day. If I put in four hours in the shop there’s a [finished] product. It’s what I want to be doing.”