.How Long Had Alberto Contador Been Doping? 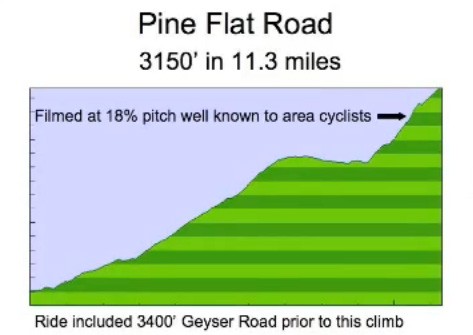 This morning’s announcement that Alberto Contador has been stripped of his 2010 Tour de France title raises all kinds of questions, but the one most people are asking is: if the allegations are true, then how long had he been doping?

On hearing the news I immediately thought of this video, shot in 2009 and posted to YouTube, of Team Astana training for the Tour of California on Pine Flat Road outside of Geyserville. Pine Flat is the toughest, most aggressive road in Sonoma County, especially up at the top, where after 12 miles of unforgiving climbing the road gets very, very steep—that’s where this video was filmed.

Notice in the video how far ahead Contador is of everyone else—including teammates Levi Leipheimer and Lance Armstrong. Notice his easygoing smile. I’ve talked to cyclists about this video, and they liken Contador’s ascent to an “escalator” or a “motorcycle.” Watch:

Still not convinced? For an article about Sonoma County’s toughest cycling roads, it was told to me that on a separate day of training, Team Astana started back up Pine Flat Road, went halfway up, changed their minds and turned around.

Like many, I used to be completely impressed by feats of physicality like this. I used to be proud to show people this video—Look! Contador killing it on Pine Flat, right in our backyard!

But after the test results and today’s news, well, it’s hard not to feel duped.

Next ArticleRaising Pigs in Petaluma