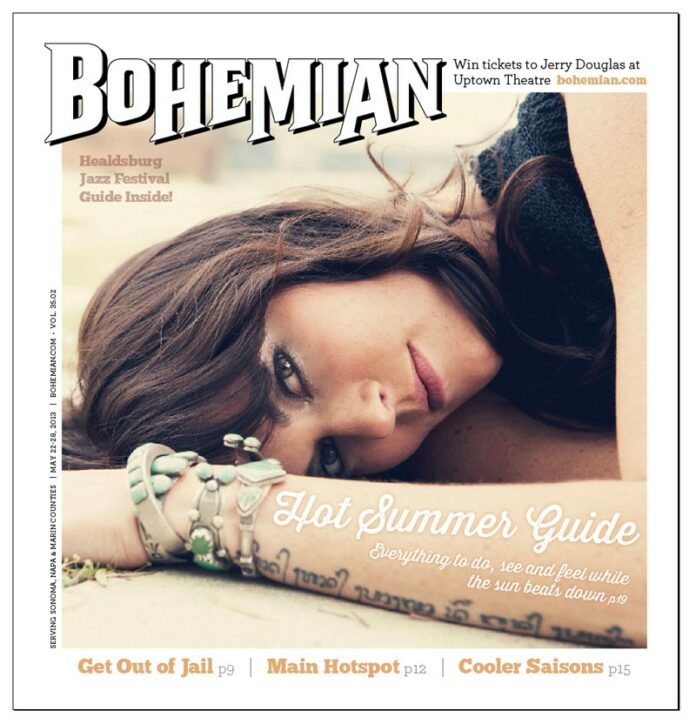 Every which way to spend your time in the summertime months

Summertime memories are best made casually—the late-night walks, the impromptu skinny-dipping sessions, the boozy kisses and the houses full of friends. But planning your summer is key also, if only to make sure you don’t miss the best that the North Bay has to offer. Here’s our selective list of ways to spend the hottest season of the year, from Memorial Day to Labor Day.

Napa Chefs’ Market It’s not all about wine in Napa—there’s food, too. At the Napa Chefs’ Market, check out two cooking demonstrations each night and enjoy the finished product. Local produce for sale, live music. Thursdays, May 16 through Aug. 1, downtown Napa. 5–9pm. Free. 707.257.0322.

Oysterpalooza Celebrate the bivalve with New Orleans cuisine, live music and, of course, salty, sweet oysters in this sixth annual event. Music by Arann Harris and the Farm Band, the Crux, Church Marching Band, the Far West, Windy Hill Bluegrass and Supermule. Music begins at noon for the May 26 event at Rocker Oysterfellers, 14415 Hwy. 1, Valley Ford. $15, does not include food. 707.876.1983.

Marin Home & Garden Expo Exhibitors, lectures and demos showcase all things for house and yard in Marin County at this third annual expo event. Put on by the Marin Builders Association, all proceeds benefit the association’s scholarship fund. June 1–2. Marin Center Fairgrounds and Exhibit Hall, 10 Avenue of the Flags, San Rafael. 10am–5pm. $10. Free for kids 12 and under. 415.507.1537.

Forestville Youth Park The only privately owned public park in the country celebrates with plenty of barbecue, community spirit, a parade, a carnival and live music, including evening performances by the Unauthorized Rolling Stones (Saturday) and Wonderbread 5 (Sunday). June 1–2. Parade, Saturday at 10am; festival, Saturday–Sunday. 7045 Mirabel Road, Forestville. Free. www.forestvilleyouthpark.org.

Art at the Source More than 160 artists in dozens of studios throughout western Sonoma County are open to the public during two weekends, June 1–2 and 8–9. Art at the Source provides an opportunity to look behind the scenes, meet the artists and snap up some great deals. Maps can be found at www.artatthesource.org or at the Sebastopol Center for the Arts, 6780 Depot St., Sebastopol. Free. 707.829.4797.

Marin Art Festival This “lawn party for the arts” features over 250 artists by the lagoon in the Marin Civic Center in a two-day outdoor party that includes live music, fine wine and brews and a wide variety of Cajun, Greek and French fare. June 15–16, Lagoon Park, at the Marin Center, Avenue of the Flags, San Rafael. $10; kids and parking, free. 415.388.0151. www.marinartfestival.com.

San Anselmo Art & Wine Festival Over 60,000 folks converge on downtown San Anselmo each year—hungry, thirsty, craft-starved folks. As usual, a section of the fest will include over 200 artists and their various works. There will also be food booths, wine, a merchant marketplace, an emphasis on live music and a kids area. June 22–23. San Anselmo Avenue between Bolinas and Tamalpais streets. 10am–6pm. 415.454.2510.

Mill Valley Wine & Gourmet Food Tasting Now in its 32nd year, this event was founded by Jim Canepa, the late owner of the Mill Valley Market, and has evolved over the years into a fest noted for its large selection of boutique wines and new food trends. Live music, too! June 23 at Depot Plaza, downtown Mill Valley. 1–4pm. 415.388.9700. www.millvalley.org.

California Beer Festival The best brewers in the Golden State face off with over 70 beers on tap. There’s music by Petty Theft, Monophonics and Metalshop with a barbecue cook-off. June 29, 12:30 to 5pm. Stafford Lake, Novato Blvd., Novato. $40. www.californiabeerfestival.com.

Marin County Fair The annual Marin County Fair is back, and, as always, the music and fine art are stellar, with fireworks ending every night. Things kick off with Kingston Trio and Eddie Money (July 4). Disney Channel star, Zendaya entertains (July 5), the Wailers take the stage (July 6) and The Pointed Sisters get excited (July 7). July 3–7. Marin County Fairgrounds, adjacent to the Marin Center, Avenue of the Flags, San Rafael. $13–$15; under four, free. June 30, 12 and under, free. 415.499.6400. www.marinfair.org.

Fourth of July with Santa Rosa Symphony Reviving a past tradition dating back to the pre-Green Music Center days, this concert culminates in an explosive celebration of America with a choreographed fireworks display. The back of the main hall will be open for maximum awesomeness. Thursday, July 4, Green Music Center. 1801 East Cotati Ave., Rohnert Park. 7:30pm. $25–$85. 866.955.6040.

Cotati Accordion Festival Use an accordion—go to Cotati! This year marks the 22nd festival of keys and bellows. Italy’s jazz accordion legend, Renzo Ruggieri, comes to the festival to play his squeezebox, as do Andre Thierry & Zydeco Magic, the Mad Maggies, Jet Black Pearl, The Internationals and many others. Aug. 18–19. La Plaza Park, Cotati. $15–$25; under 15, free. 707.664.0444. www.cotatifest.com.

Seafood Art & Wine Festival Bodega Bay celebrates for the 19th time with seafood and music. Benefits Stewards of the Coasts and Redwoods and the Bodega Volunteer Fire Department. Aug. 24–25. 16855 Bodega Hwy., just east of the town of Bodega. $8–$15; under 12, free. No dogs this year. 707.824.8717. www.winecountryfestivals.com.