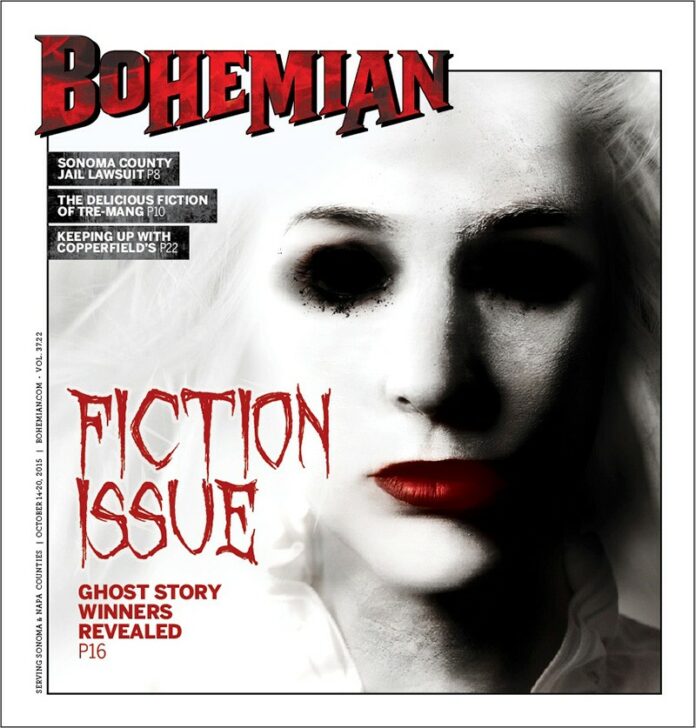 Winners of the Bohemian's 2015 Fiction Contest

The instructions for this year’s fiction contest were deliberately vague: write an approximately 450-word ghost story that will scare the pants off us. I expected that entrants would submit stories that were all over the map and filled with ghosts, monsters, crimes and various horrors. And that’s what we got. The winning story, “Occupational Hazards,” is a ghost story with a dark sense of humor: a “corporeally challenged” apparition meeting with a social worker. We also chose two runners-up: Karen Rasore’s story “Haunted,” a short and, yes, haunting tale of loss, and Evan St. Andrews’ bizarre “Holes.” Thanks to all who submitted stories, with an honorable mention to Mandra Drouin. Until next year, enjoy these creepy tales.—Stett Holbrook

“We’ve received reports that you’ve been haunting outside of your assigned geographical zone, Mr. Moloch,” said Ivan Whiting to the shimmering apparition seated across the desk from him.

The semi-translucent figure folded his arms—which Ivan noted were ropy and muscular and covered in Satanic tattoos—and his eyes seemed to grow bigger and a shade darker, though Ivan knew this was impossible. Slowly, half-smiling, Ivan’s client said, “And what are you gonna do about it, bureaucrat?”

Ivan had been reassured by the Division of Spectral Oversight that this population was absolutely safe. All the experimentation—er, voluntary research—had proven that time and again. His job was secure. He had great health benefits. A stellar retirement plan. Ivan swallowed and answered, “Um, well, seeing as this is your first violation, I’m only giving you a warning. But it will be noted on your record.”

Had Mr. Moloch’s eyes just grown even darker, more sinister? No. Ivan admonished himself for stereotyping his client, and continued: “If you’re finding your transition to the afterlife difficult, I could refer you to some fantastic spectral support groups.”

Suddenly Mr. Moloch’s cool demeanor shifted and he raged, “You want me to go to a goddamn special group for ghosts? You want me to share my feelings”—his voice dripped with contempt—”with a bunch of whiny-ass dead bitches?”

Ivan could feel the sweat begin to form around his temples, and his palms grew slick around his tightly clutched pen. “Um, uh, well we don’t use the g-word anymore. We feel it’s more appropriate to refer to those of your population as ‘corporeally challenged.'”

At this Mr. Moloch began to laugh, a deep and sinister sound that left Ivan with a sensation of leaning precariously over a cliff. Ivan gathered his wits and reminded himself that Mr. Moloch was no different than any other resistant client utilizing defense mechanisms.

“Well, overall I think you’re doing just great,” said Ivan, shakily closing his notebook. “So unless you have any final questions, that’s all for today.”

“I do have another question, actually.”

So Mr. Moloch had decided to seek his help after all. Ivan straightened his back, smiled weakly and nodded. “Of course, Mr. Moloch, I’m more than happy to answer any questions you might have. And remember, we’re in a cone of safety.”

Mr. Moloch sat forward, stared at Ivan, and too late Ivan glimpsed the chasm of pure nothingness deep inside Mr. Moloch’s eyes. A wicked grin spread across his face.

“Are you outside of my geographical haunting zone, Ivan?” The ghost shot forward and Ivan tipped back in his ergonomically fitted chair and landed on the floor. The office went silent. A few moments later, Ivan rose, stretched and strode from the room.

Later that evening, at the dinner table, Ivan Whiting’s wife would comment that his eyes, she could swear, looked just a little darker than they had that morning.

Emily opened her eyes and realized that she was sitting in front of the window in her usual spot in the leisure room. She was having the visions again, and although they were unbearable, it was more so to find herself sitting in the chair once more, anchored in a reality she refused to accept. She didn’t tell anyone that she was having the visions again. Her admission only led to electrical shocks and more drugs shoved into her veins or down her throat. Nobody believed her, and they never would. She had no idea how long she had been here now. No one had been to visit her in a very long time.

They wanted her to accept that none of it had been real, but she could not do that. She would never betray the memory of her daughter that way. They are memories, not just visions, she often told herself.

Emily was parked on a dam that overlooked the pond. She sat on the tailgate of the truck and watched her daughter, Lily, play ball with the dogs down on the dock. Lily loved animals, and she especially liked training dogs. She made both dogs sit as she threw the ball into the water. After the dogs had dove in several times, Lily put a leash on one of them. Again, she made both dogs sit. She threw the ball and commanded only one dog to fetch.

At first, the leashed dog waited, but when he began to run for the ball, Lily held on. Lily was only seven and still very small. The dock was wet from the dogs. The dog pulled Lily down the dock; she couldn’t get a footing on the slippery boards, and the animal pulled her into the pond.

Emily jumped from the tailgate, ran down the dam and across the dock, and threw herself into the dark water where she had seen her daughter go down.

She opened her eyes and saw Lily sinking into the depths of the pond. Rays of light punched through the surface and illuminated each strand of Lily’s light hair as it drifted weightlessly across the girl’s frightened face. Emily tried to swim deeper, but her shoes were like boxing gloves on her feet, and she couldn’t propel herself. She went to the surface, took off her shoes and made another dive, and then another and another. She couldn’t find Lily.

The institution stood at the top of the hill, haunting the town. It had been abandoned by staff and patients long ago, plagued by allegations of various horrible abuses. Only one soul remained. She had hanged herself decades earlier, but people still claimed to see a woman who mourned the death of a daughter she never had, sitting in the window and waiting for her return.

Marie couldn’t believe it. The hole was perfectly round, about the size of a quarter and located directly beneath her dog’s ear. Sparky’s shaggy fur abruptly halted at its edges. Beyond was inky blackness. He seemed perfectly fine. Tail wagging, he gave a little impatient “Yip-yip” as she examined the hole.

Marie’s finger ran little exploratory circles around the circumference of the hole until, her curiosity eclipsing her horror, she dipped the tip of it inside. Nothing. She probed a little deeper . . . deeper . . . until the entire digit was immersed in Sparky’s head. It met no resistance. Marie wiggled her finger this way and that, and felt only cold air.

The girl spied a pencil under the couch. She directed it inside the hole slowly, eraser-end first, so not to hurt her dog. A bird chirped outside, and Sparky jumped and yelped in response. The pencil fell in the hole! Marie gave a startled cry, but Sparky seemed unaffected.

Marie then rushed to find a flashlight. She directed its beam straight into the hole in Sparky’s head and peered inside. She could see nothing. The pencil was gone.

Marie didn’t understand what the hole was, but she knew it must be hidden from her mother at all costs. Her mother hated Sparky and was constantly threatening to send the dog to “the pound.” So Marie put a large bandage over the hole. When her mother inquired after it, Marie lied for the first time in her six-year-old life.

“Just keep him out of my way,” her mother grunted, giving Sparky a swift kick.

As the days passed, Marie’s experiments with the hole increased. Whenever she was alone, Marie dropped whatever she could find in: a tube of Chapstick, pens, pencils, candy, some old razor blades she found in the garage, even a few bugs from the garden.

Marie was midway through sticking an old drumstick into Sparky when her mother discovered them. Screaming in horror, she ripped the two conspirators apart.

“What is that thing?” her mother frantically demanded as Marie started crying. “Stay away from the dog! I’m calling your father.”

Oh, no! Marie sobbed, they are going to take him away forever. She could hear her mother in the other room shouting something unintelligible over the phone. Sparky let out little panicked whimpers, sensing Marie’s anguish. Through blurry eyes she glanced at her dog. The hole had disappeared! Marie didn’t waste a second, immediately running for the kitchen before it was too late.

But Marie stopped talking. Her mother lay motionless. Her stomach had exploded outward like rotten fruit. The kitchen floor next to her corpse was scattered with bloody utensils, candy, pens and pencils, and a few bugs crawling among the remains.

The smell was sickening.