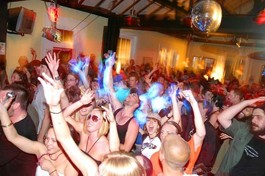 Entering the music room at the Hopmonk Tavern is a full-body shock for those acquainted with the room’s former life at the Powerhouse Brewing Company or the Sebastopol Brewing Company (seen above). Dark lighting, votive candles and disco-ball glints quaver high in the room’s exposed wooden rafters; two tree braches descend from the ceiling, with futuristic yellow lightbulbs as fruit. The whole experience is like a Tahoe-ski-lodge-meets-Space-Mountain: it’s fancy, but it’s manageably fancy.

Thursday nights at Hopmonk are given over to Juke Joint, the yearlong funk night hosted by DJ Malarkey, and its impressive May lineup of guest DJs is top-shelf Technics talent. DJ Zeph brings the crisp snares and crazy mashups on May 1; J-Boogie, a versatile master on San Francisco’s Om Records, comes on May 8; and Romanowski, whose “Strudel Strut” is a lost gem of Bay Area DJ tracks, arrives on May 29. (DJ Logic is already booked for June.)

These are the DJs that helped put the Bay Area on the turntable map over 10 years ago at Future Primitive Sound Session parties, those legendary all-night affairs that sculpted a new DJ landscape. And DJ Malarkey, aka Patrick Malone, couldn’t be more thrilled with the opportunity to bring them up to the North Bay.

“There’s never really been a funk-based weekly dance event that I know of in Sonoma County,” the 27-year-old says. “I mean, we have reggae nights and hip-hop nights all over the place, but we’re trying to pioneer a funk scene, an afro-beat scene.” Malone’s DJ career started in this very room, and he loves its gussied decor as much as its regular crowd. “The West County heads are just laid-back,” he says. “It’s a kickin’ music scene that’s been waiting to explode, and we’ve basically just provided an outlet for it.”

Up on the DJ stand, crafted from what looks like illuminated blue ice, Malone drops the needle on a flute-funk track with heavy drums. At 10pm, the bar is elbow-deep with twenty- to thirty-somethings—pleasant West County&–chic spillover from Graton’s Underwood Bistro—all vying for the attention of two blonde bartenders in uniform low-cut black shirts, dancing around to Spanky Wilson’s “I’m Thankful.” The stage wall projects mirror images of seaweed and old movies, and a skinny guy—a barback? a manager?—walks around the hustling dance area, clapping enthusiastically on the ones and threes.

At about 10:45, the place starts heating up, and two guys in thick beards and corduroy jackets squeeze inside and look up, down and around the new room. “It’s different,” one of them says to the other. “Yeah,” says his friend, and to the beat of Al Green’s “I Can’t Get Next to You,” they begin a rhythmic inch toward a group of girls, in unison, bopping their heads.