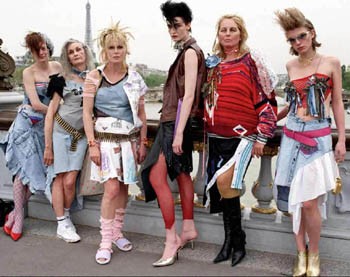 When will we be cool enough to stop posing and embrace the real thing?

It’s time to let hip die. It has served its purpose, energized some nightclubs, inspired some good books and made some nasty people rich. Now it can die, because it is really beginning to stand in the way of something more interesting.

Hip. The slick little monosyllable is, after all, more than half a century old, having pretty much replaced “hep” in the popular press just after the Second World War. Hep and the world of hepness and the hepcat were the spirited creations of black jazz players in the 1930s.

You don’t need to agree with The Dictionary of American Slang‘s fanciful derivation of “hepcat” from hipicat–“person in the know” in the West African language Wolof–to recognize that the clued-in, snazzily stylish hepcat ethos was pure African American creativity: a zoot-suited, hi-de-hi-de-hi-de-ho horse laugh at the racist stereotype of the “Negro” as a shuffling, mumbling, fresh-out-of-the-cotton-patch naif. Here was an image of blacks as dazzling urbanites: brilliant, stylish and “hep to the jive”–so knowing in the ways of the world, that is, that no one, ever, could get the jump on them.

Then in the bebop era, “hep” became “hip,” and this little word began a long career in the (white) mass media. From a good-natured symbol of subcultural solidarity, it slowly morphed into something altogether less cheerful and nourishing. This change is the dispiriting path from the radiantly sleek and life-affirming Harlem bandleader Cab Calloway in his white suit to a SoMa art dealer in his all-white room, sizing you up and finding you pathetic.

This change has been partly a matter of scale. Hipness has become a heavier and heavier burden with the passage of the decades. What the hepcats had to master to be hep was a manageable number of gestures, attitudes and musical fashions, mostly native to their uptown New York or Southside Chicago milieu. What the beatnik circa 1958 had to master to be hip was an expanded list, including, but not limited to, bebop, existentialism, Paul Klee, Glenn Gould, William Blake and Buddhism.

But what the early-21st-century would-be hip guy or gal has to master (or pretend to master) just to stay in the game keeps growing exponentially. Modern avant-garde art from Delacroix to Caio Fonseca. Pop culture from Louis Jordan to Deadwood. Film from the Lumiere brothers to the Coen brothers. You have to be intimately familiar with King Sunny Adé records and know what techouse is. You have to be no stranger to kink: Bob Flanagan, Jim Thompson, Ed Gein. You have to have at least a nodding acquaintance with Walter Benjamin, Jacques Derrida, Roland Barthes.

And that’s only the core curriculum, so to speak. If you decide to major in hipness, then you’re expected to go absolutely all the way. The hip film jock, for instance, should not only have favorite early ’70s Hong Kong sex comedies and German Alpine films, but also be prepared to argue the merits of raw Belgian video stock and underground Japanese anime. It just never ends, and I think that the sheer magnitude of it makes people cold and grumpy.

Compassion is called for. After all, the hip–the folks who absolutely have to keep up–are among the much-touted information glut’s frontline troops and main victims.

Hip is such an enormous proposition in our culture now that it has fragmented into dozens of different directions. What I’ve described here is mainly (but not exclusively) white, middle- to upper-middle-class, college-educated, culture-centered hip. Inner-city black hip–defined by kids as young as 14 years old–has different rules, which dictate youth culture in general and exert steady pressure on other forms of hip.

And I’m certain that there are versions of hip, hipper, hippest for most of our major subcultures, from Trekkies (it’s hipper to call them Trekkers) to truckers.

It’s mostly the arty, white-urban hip that I want to say goodbye to.

What’s wrong with Fassbinder movie revivals, raw-food restaurants and the Gotan Project? Not a thing. More of them, please.

What’s wrong is that snooty art-dealer tone, that fossilized critique of America à la 1960 that lurks in the bonding rituals of hip. And oh, the air of unanimity as those rituals go forward! We all hate wall-to-wall carpeting. We won’t sing folk songs around a campfire, except ironically. Religion sucks (although “spirituality” doesn’t). Hip, whose guiding idea is ostensibly to liberate us from our conformist childhoods, is now the very model of conformism. No wonder global capitalism adores it and needs its characteristic combination of total predictability and restless worship of change, its total ability to “deliver a demographic.”

But what lies beyond hip? Its essential truth, I submit, as well as its cancellation. I want hip to put itself out of existence by being faithful to its own principles. One of those principles is that it is very good to encounter and interact with the “Other.” That’s the point of going to Turkish restaurants and listening to African music, isn’t it?

People who are hip believe, explicitly or implicitly, that the world would be a better place if the unhip, snoring in front of their TiVos, would wake up, go out into the beautiful and complicated world, and interact with people different from themselves.

They, the hip, believe that they do this all the time.

I wonder. I wonder whether hip people are willing to jar themselves out of their own certainties as totally as they think others should be jarred. Going to see Ronald K. Brown or to hear Saul Williams may provide rich food for thought, but you may be sure it will be provided well within the comfortable ritual realm of hipness, on a respected urban stage. Let’s see how our hipsters do on a visit to an African Methodist Episcopal church in Oakland. Let them stay for the sermon–not just the cool gospel music–and consider seriously what the assembled African Americans have come to hear and mull over.

I want to see hip people confronting a hated Other like fundamentalist Christianity. Let them learn the difference between fundamentalist and evangelical. Let them read articulate evangelical scholars and leftist evangelicals. Let them, for once, sympathetically and compassionately look for the human truths that lie behind the appeal of such faiths.

I’d like them to poke around in labor history and blue-collar gay and lesbian history and regional history so they can see that the fires of unorthodox thought and spiritual rebellion sometimes burn in very unlikely looking places–in ugly little houses with wall-to-wall carpeting, for example.

What would come of this dramatic about-face I’m urging on the hip?

Maybe not the downfall of hip itself, but only a new image in the hipster’s brain of a more complex, rich, pregnant world than he or she has ever seen before.

Maybe a revived sense of the magical trickster logic living inside everything.

Maybe some hope for the future.