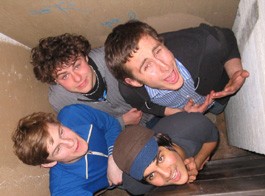 ACGS: The not-a-record-label for nonconsumers

When a record label goes scouting for new bands to sign, talent alone is worth nothing next to audience reaction. When the kids go crazy, record labels see profit, and rush to ink a contract. But what if the band is great and the kids are going crazy, but no one knows about it yet? Historically, the band scrapes up a bunch of money to release its own record, and legendary independent record labels like Merge or Saddle Creek are born. What if the bands just plain have no money?

Enter Astronomy Club Ghost Story (ACGS), which emphatically is “not a record label,” according to 21-year-old founder Matt Harra. In fact, it’s not even really Harra who owns it. “We’re not communists,” he explains, standing out on the sidewalk during a recent ACGS band showcase at a Santa Rosa instrument store, “but everyone kinda owns it.” When asked what title he holds at the fledgling label, he looks simultaneously amused and perplexed before mustering, “Um, ‘friend of everyone’?”

No one owns it in part because there’s nothing tangible to own. Every Astronomy Club Ghost Story release is available as a free download from the not-a-record-label’s website, complete with PDF files for full artwork. It is then up to the not-a-consumer to burn the CD, print out the artwork and assemble the band’s not-a-product. “It sucks to charge your friends money for things that you made and that everyone is kind of a part of,” Harra says. “Most of us are totally broke anyway.”

In the 1980s, everyone recorded songs on boom boxes, put them on cassette tapes and traded them back and forth incessantly. Astronomy Club’s formative years have followed the same idea, except that instead of cassette tapes, the current prevailing method of sharing music is online–which means that the label’s website is a hidden gold mine of unaffected musical innocence for all the world to sample.

While ACGS has no allegiance to any particular genre, the music on its site is always interesting and vital. Refined classicism combined with a knife-edged lilt seems to be a trademark, an alienated, raw energy always propelling the music from behind. During this night’s showcase, ACGS’ Highlands–featuring baritone guitar, drums, cello and broken saxophone–thrust that energy squarely to the forefront.

Singer Dean Tisthammer introduced the band by first naming people not in the band, pointing at them in the crowd, and then randomly choosing strangers, including “you, you and you–and all of you!” Richard Laws then began drumming with his back to the crowd, his formidable stance preventing waves of kids in full abandon from crashing into the band.

By the time the band started “Grey Skies,” a cover of an obscure 1960s single, even the doorman had joined the heaving throng, helping hoist a random melodica-playing stranger over everyone’s head while the front row beat their bare hands all over a liberated snare drum. You, you and all of you, indeed.

“It’s probably no coincidence that there’s blood on every drum set owned by an ACGS band,” the 21-year-old Tisthammer joked afterwards, referring to the kind of untamed electricity that has landed high-energy bands like Against Me! and Anti-Flag major-label record deals. But there’s a specific reason for the Highlands’ electricity, and it’s the tight-knit support system that the ACGS circle provides. “It’s gonna sound super corny, like all of us holding hands around the globe,” a still-sweaty Tisthammer says, “but a lot of people started out a little rusty when they first started playing, and we’ve always encouraged them.”

“Even the people who weren’t great in the beginning, they always got better. Everyone was always supporting them. Everything is getting better all the time.”

Most of the people affiliated with ACGS live in the uneasy silence of west Sonoma County, an isolated environment conducive to picking up an instrument and banging the hell out of it. It’s also a prime spot to circumvent outside influences. Eighteen-year-old Jesse Strecker of Monte Rio’s Oh Children!–the missing link between Leonard Cohen and Pavement–cites other ACGS bands and the West County in general as a primary source of inspiration, resulting in his musical odes to Bartlett’s Market and the Monte Rio Bridge. “We wanted to do something that we weren’t hearing someone else out there doing,” he says, “and we didn’t want to be judged as fitting into a scene.”

Strecker himself has thwarted pigeonholing by maintaining a variety of side projects and in rabidly inviting other musicians to join him. I recently asked one such guest, the Velvet Teen’s Josh Staples, if the words “Secret Cotyledon” meant anything to him. It took a moment for the song title to register as the Casio-flavored recording he’d sang on over five years ago. “Oh, that’s right! These kids came over, and all I remember is that they were really, really excited,” he said. “I have no idea to this day what it even sounds like.”

Now home to over 85 songs (including “Secret Cotyledon”), the Astronomy Club Ghost Story’s site receives an increasing number of hits from outside of its circle. This raises the possibility of commercial expansion, but Harra is skeptical. “We’re very much in favor of people hearing our music, but not necessarily interested in promoting it in a conventional way,” he says. “While we don’t have ambitions to ‘make it,’ we’re still interested in being successful, but might have a different definition of success.”

This ideal of expression over profit is important to Anthony Jiminez, whose band, Exasperation Missionary, closed the Santa Rosa showcase. Exasperation Missionary’s latest recording was completed just two days prior, giving Jiminez little time to assemble a limited run of actual CDs, including a sewn-together booklet with handwritten explanations for the songs (“This song is about feeling an odd persistence to be as self-sufficient as possible”). After the show, the 18-year-old Jiminez sold the CDs along with handmade paint-stenciled T-shirts, barely breaking even.

“I don’t plan on really making money off music,” he declares. “I can see where it could help me and give me a little boost, but I don’t see it being an occupation at all. A lot of people say that when they’re young, and then they grow out of it, but I honestly can’t see that happening.”

What if the day came when an offer was made to professionally manufacture, distribute and promote the way-talented, tight-knit, ridiculously supportive Astronomy Club Ghost Story catalogue? Matt Harra, the friend of everyone, the one who thinks paying for things sucks, keeps his sights realistic. “We’ll drive off that bridge,” he says, “when we get there.”