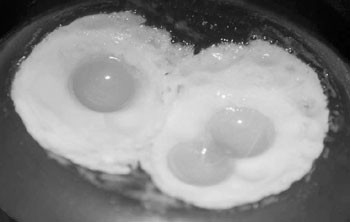 The war on drugs extends to your granola

If you buy illegal drugs, you may be supporting terrorism, the Bush administration tells us in a $10 million ad campaign. Now, if you buy granola, you may be buying illegal drugs, according to a barely reported Drug Enforcement Agency ruling made last Oct. 9 that reclassifies your larder’s hemp granola, waffles, oil, or other hemp food products as a Schedule I narcotic. Since then, the budding American hemp foods industry has been fighting for its life, waging an even less-reported legal battle that took a dramatic turn recently.

Under Bush appointee Asa Hutchinson–the defeated ex-congressman who previously helped rescue our republic from Bill Clinton’s errant semen–the DEA made an “interpretive ruling” on the Controlled Substances Act of 1970, determining that the law now covers any ingestible product that may contain any measurable amount of THC (tetrahydrocannabinol, the psychoactive compound in pot), however minute.

In announcing the ruling in October, Hutchinson said, “Many Americans do not know that hemp and marijuana are both parts of the same plant and that hemp cannot be produced without producing marijuana.” He might also have mentioned that the poppy seeds in your bagel contain trace amounts of opium and that the level of THC in industrial hemp or in hemp food products is so negligible that you’d be more likely to get high from reading the word “hemp” than you would from consuming pounds of hemp foods.

Most hemp products sold in America are grown in Canada, where government testing assures there are no psychoactive levels of THC present. Most American hemp food companies adhere to a standard of no more than 1.5 parts per million, while the concentration needed to even begin getting you high is some 10,000 times that. The DEA ruling, however, requires that there can be no discernible amount of THC whatsoever in the foods. At the DEA’s website, the list of suspect products includes veggie burgers, snack bars, salad oil, beer, cheese, or other items made with hemp–this from the same administration that attempted to ignore studies about unsafe arsenic levels in our drinking water.

No studies have suggested that there may be health or psychological problems related to consuming hemp foods; rather, hemp foods are found to have considerable nutritional value. According to Paul Holden, director of operations at southern California’s Mother’s Market, “Hemp oil contains the highest concentration of essential fatty acids of any oil, as well as a complete protein and other valuable nutrients. That’s why people buy it. It’s not a drug. This is an utterly nonsensical ruling.”

The October ruling, which allowed a grace period for stores and consumers to dispose of their stocks, went into effect Feb. 6, but within a couple of days a new grace period was allowed, until March 18, possibly to preempt an emergency stay requested in the 9th District Court of Appeals by the Hemp Industries Association. That stay was indeed granted on March 7 and should remain until the court can rule on the validity of the DEA ruling. A spirited emergency hearing took place on April 8 with both sides arguing their case. The appeals court did not indicate when it would rule on the matter.

Though hemp foods were briefly illegal on Feb. 6, many local stores, including Mother’s Market and Trader Joe’s, continued to stock them. That is no trivial matter, according to DEA spokesperson Will Glaspy, contacted at the DEA’s Washington, D.C., headquarters. Reached before the stay was granted, Glaspy said, “THC is a controlled substance, and any detectable amount of it is illegal. The burden is on the seller and buyer to make sure they’re dealing in a legal product. Technically, it could be a criminal matter.”

That extends to you, the consumer, and to me who just finished a tasty Govinda’s Hemp Bar while writing this. (It’s Ziggy Marley-approved! Come and get me, Copper!) While Glaspy said that the feds rarely prosecute simple possession cases–“I don’t anticipate someone getting thrown in federal prison for possession of a granola bar with a minute amount of THC in it”–the fact remains that it would be their call whether or not to prosecute you as a felon for that hunk of hemp cheese in your fridge.

“It’s a real Catch-22,” said David Neuman, vice president of sales and marketing for Nature’s Path in Blaine, Wash., which markets Hemp Plus waffles and granola. “They’re saying, ‘You can sell your hemp food product if there’s no THC, but we’re not giving you the standards for saying there’s no THC, and it’s a class one felony controlled substance.’ Many of our customers’ attorneys are insisting on written assurance from us that there is no THC in our product, and there isn’t down to one part per million, which is as far as our testing goes. But if the DEA has some test that can show smaller amounts than that, then we’ve perjured ourselves or falsified documents.”

Prior to the court’s stay, Neuman said Nature’s Path was going out of the hemp foods business, at a cost of income and jobs. “And why?” he asked then. “No one has ever been intoxicated by hemp foods, ever. So what is the basis for this very radical action? There is none.”

Reached at a health foods convention in Anaheim after the emergency stay was declared, he was in a more upbeat mood, having just posted a sign at the company’s booth reading: “Hemp Plus wins, DEA defeated . . . now taking orders.”

“Trader Joe’s placed a truckload order today, and two days ago we wouldn’t have been able to fill that without fear of reprisal,” Neuman said. “Our lawyers tell us to expect a summer-long debate, and we’re confident we’ll win in the end, so we’re getting back into production. The court has granted an emergency stay and has scheduled an emergency hearing, which they typically only do when they realize that rights are being infringed.”

“The DEA ruling was entirely a political decision. It’s not a scientific one,” claims David Bronner, president of Dr. Bronner’s Magic Soaps and chair of the HIA’s Food and Oil Committee. He said that many HIA organization members have continued to make and sell their products on the presumption that, lacking a clear scientific standard from the DEA, it is sufficient that their products are THC-free by Canadian standards.

Bronner’s product lines aren’t affected, as soaps, shampoos, and other nonconsumables don’t fall under the ruling. He’s an ardent opponent of it nonetheless.

“As a company, we engage in a lot of ecological or socially progressive causes. Industrial hemp has so much potential to substitute for polluting petrochemicals or threatened timber stocks [hemp also grows readily without pesticides or herbicides]. And the food markets are really the near-term market driver for industrial hemp. The nutritional profile of the seeds is so high that there’s a lot of potential there to ramp up the economies of scale so that hemp fiber can compete pricewise with timber and petrochemical processes. That’s what motivates us,” he said.

Like Neuman, he’s confident the HIA will prevail in court. Meanwhile, there is another challenge to the ruling via an unanticipated medium: NAFTA. Kenex, a leading Canadian hemp producer, has filed an arbitration claim arguing that the U.S. ruling amounts to an unfair restraint of trade.

Bronner explained: “Under NAFTA, if the U.S. government is going to institute something that’s going to effect trade, it has to have some defensible reason, a scientific rationale. The DEA failed to conduct any sort of risk assessment or science-based analysis justifying a ban on trace THC in foodstuffs. Meanwhile, the industry can demonstrate that there are no health concerns or interference with drugs tests or anything else. So they’re arguing through NAFTA that the U.S. is closing their markets and raising a barrier to trade without following the NAFTA or WTO provisions.”

Even prior to October’s ruling, the DEA had busied itself by interdicting tons of sterilized hemp birdseed at the Canadian border, at least saving our birds from becoming felons. Unless the HIA prevails in court or NAFTA overrides the law (as it already has in instances usually detrimental to the environment or workers), beware of what you eat: It may contain a felony.

To find out more on the issue or to become involved, check out www.votehemp.com and www.dea.gov.