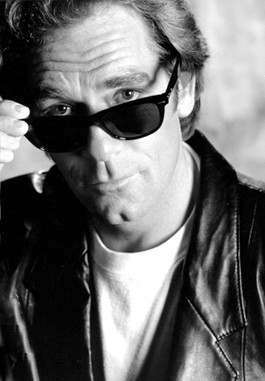 1977 Huey Lewis’ band, Clover, backs Elvis Costello for his debut album My Aim Is True, which is weird. As the singer, Lewis is left out of the recording sessions, and instead he blows harmonica with Thin Lizzy, which is actually weirder. Clover also play the Inn of the Beginning in Cotati, and Lewis’ photo from that night hangs on the wall for the next 20 years.

1982 Two years after an unnoticed debut album, Huey Lewis and the News put out Picture This, with the big hit “Do You Believe in Love.” However, when the band appears on television shows, they instead insist on performing, a cappella, the Tymes’ 1963 romantic ballad, “So Much in Love,” beginning an a cappella band tradition that stretches from Curtis Mayfield’s “It’s All Right” to perpetual appearances at pro baseball and football games singing “The Star-Spangled Banner.”

1984 In the middle of “Workin’ for a Livin’,” as documented in a VHS home video recorded live in Germany, Huey Lewis lets out a primal, uproarious scream, placing himself in outré but firm proximity to Roger Daltrey and his famous “Won’t Get Fooled Again” scream, which of course is the greatest rock ‘n’ roll scream of all time.

1985 Huey Lewis and the News play at the Petaluma fair, a modest North Bay date booked just before the massive Top 40 success of Sports, which the band, who are suddenly playing stadiums, graciously decide to fill. With the band at the top of the charts, it is the single most coolest thing going on in town, and at the end of “Heart of Rock and Roll,” after rattling off “Cleveland” and “Detroit,” Huey Lewis points to the sky and shouts, “Petaluma!” The rodeo arena goes totally apeshit.

1985 Sports contains “Walkin’ on a Thin Line,” cementing the dichotomy that is Huey Lewis: the same man who gave to the world one of the greatest Vietnam vet anthems also brought us, on the same album, “Bad Is Bad.”

1986 Huey Lewis and the News take a cover shot for Fore! at Tamalpais High School featuring the dorkiest possible looking photo of Johnny Colla, the group’s saxophone player. They make the heads-in-the-sand video for “Stuck with You,” which is the dorkiest possible video on MTV. They release the song “Hip to Be Square,” at the time a somewhat successful defense of their enduring dorkiness. The band close out a banner year with a string of sold-out concerts at the Oakland Arena, with guest appearances by Ronnie Lott, Dwight Clark and Joe Montana of the red-hot San Francisco 49ers singing onstage.

1993 Huey Lewis appears in his first major film, Short Cuts, portraying a fisherman in Robert Altman’s brilliant adaptation of Raymond Carver stories. In the middle of an early fishing scene in the film, inexplicably, Huey Lewis unzips, pulls out his dong and starts peeing in a river. Huey’s dong. Right there, on the screen.

1995 During an episode spoofing Lollapalooza, The Simpsons brilliantly offers an argument between Homer, Bart and Lisa about what’s cool. Defending his Grand Funk Railroad uncoolness by quoting Huey Lewis, Homer declares, “You know what the song says: it’s hip to be square!” Lisa, with a perturbed look on her face in the back seat of the car, quickly replies, “That song is so lame.”

1996 Mario Cipollina, the totally bad ass-looking bassist who quit the News in 1994, is stopped by Novato police and found with heroin, meth, a knife and a gun. Two years later, Cipollina steals over $5,000 worth of radio-control cars from a toy store in San Anselmo. In 2006, he is found with heroin and meth in his pockets and busted again. Moral of the story: don’t quit the News.

2000 Huey Lewis co-stars in Duets with Gwyneth Paltrow, and their version of “Cruisin'” pours out of supermarkets and dentists’ offices forever.

2005 In the SF Weekly, Katy St. Clair writes what is perhaps the definitive statement on Huey Lewis’ fan base, subtitled “The Enduring Bond Between Huey Lewis and the Developmentally Disabled.” (St. Clair also makes what perhaps is the definitive statement on Huey Lewis by asserting that “Huey Lewis is a retarded version of Bruce Springsteen.” She said it, not me.) The story flies around the internet, and Huey Lewis’ guarantee for corporate parties and country clubs, coincidentally or not, skyrockets.