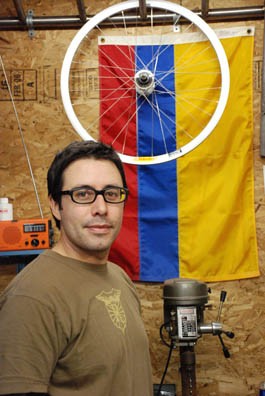 It’s tempting to say that Mauricio Rebolledo’s bike-building shop feels like a museum or an art gallery. One can sense the reverence Rebolledo has for the objects he creates, and the bikes posed variously around his Glen Ellen garage make it feel almost like an exhibition space. Held aloft by a stand is a classic pink touring bike he’s building for his wife; over there is a muted-green track bike with no gears or brakes, a vehicle built simply for speed.

But this is a shop in motion, a work environment where Rebolledo takes the time—two weeks for each bike—to create tailored machines that also happen to be works of art.

The son of Colombian immigrants, Rebolledo, 38, has a deep respect for the cycling tradition, and builds that appreciation into each of his bicycles. He makes throwback lugged-frame bikes, an artisanal process in which bicycle tubes are joined by sleevelike lugs that can be carved with unique designs.

“It’s an aesthetic choice—I like being able to embellish the joints,” Rebolledo says, pointing to such designs as small hearts. Most bicycles today are TIG-welded, a functional fix that’s much quicker to fabricate but whose filler material is visible at the joint, a contrast to the elegant lug weld that Rebolledo fashions.

Most big companies don’t make lugged, steel bikes anymore. Today’s composite racing bikes, like the ones riders will mount the upcoming Tour of California, are “like Formula One cars,” he says. “They’re not made to last.” By adding a few ounces, Rebolledo makes bikes that are comfortable and last for many years.

Rebolledo’s love of bikes began when he was a boy spending summers with his grandparents near the Colombian town of Cali. His grandparents ran a bicycle parking garage that repaired bikes while their owners were at work. The boy listened to live coverage of the Vuelta a Colombia, imagining himself climbing up the country’s rugged mountains.

Rebolledo went on to earn a master’s degree in anthropology and got a job with a San Francisco nonprofit. But his love of cycling endured, and he spent his days off at a San Francisco rec center, teaching kids to repair their bikes. This led to a job at San Rafael’s Trips for Kids, an innovative shop that teaches teens to refurbish broken-down bikes.

And then something happened that shows how a lot of good can sometimes come from something that feels really bad: Rebolledo’s hand-built mountain bike was stolen. A colleague suggested that he get a new one built by her cousins, Jay and Jeremy Sycip, who now create bikes in Santa Rosa.

Rebolledo not only got his new bike made by the Sycips, he ended up apprenticing with them. “They taught me everything,” he says. Over time, a one-day-a-week internship became a full-time job. Six years later, Rebolledo was a master builder.

“He’s very attentive, determined and detail-oriented, very passionate about the craft,” says Jay Sycip. “A lot of care goes into each frame. He has integrity—that’s important for this product.”

Rebolledo Cycles opened in 2006, and the bikes are built in the sheds adjacent to the home he shares with his wife and 13-month-old son. They cost about $2,500.

Rebolledo starts by meeting with a client to discuss everything from the bike’s geometry to what designs they’d like on the lug cutouts. Every bike is made to measure, and Rebolledo considers body type and his or her flexibility.

“Since every customer is different, every bike is different,” he says. Each is “a reflection of who I’m building it for, which I really enjoy. I like building with intention, building a bicycle for someone.”

For color suggestions, Rebolledo brings out automotive paint-chip books from the 1950s and ’60s, the days of pre-metallic paints. The tri-color band on his insignia represents the Colombian flag, another nod toward tradition. He builds one bike at a time, devoting his full focus to tailoring each one to fit the client.

Part of Rebolledo’s goal is to change North Americans’ perception of Colombia, using his bikes as ambassadors. “We’re bombarded by negative stuff [about Colombia’s drug problems] all the time,” he says, “but I want my bikes and my brand to connect to the better part of [Colombia’s] history—the passion for cycling, the passion for living.”

In his shop, Rebolledo is clearly a man who has found his calling. “I never thought I’d be doing anything like this. I’m glad I found it,” he says. “I enjoy working on bikes, working with my hands, working with people. But it’s funny to be in the Tour of California issue, because these [bicycles] are the antithesis of racing bikes.”

For more information on Rebolledo Cycles, call 707.293.3062 or go to www.rebolledocycles.com.