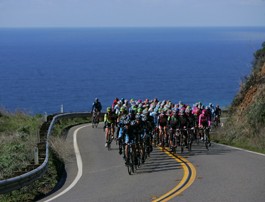 Get Yer Wheels On

The Amgen Tour of California returns for more

A distant pace car appears. In the lead, racing down the narrow road, a headway-making horde of police vehicles speeds past. A breathless pause, and then, electrified with the singular pursuit of the finish line, comes the spectacularly manic blur of hundreds of speeding cyclists.

Welcome to the Amgen Tour of California, which thunders Stages I&–II, Sausalito to Sacramento, Feb. 18&–19, and has succeeded in not only delivering world-class cycling to our North Bay backroads for the last two years, but in fostering a strong spirit of community camaraderie and pride.

Of course, much of that pride comes from defending champion Levi Leipheimer, the Santa Rosa hero who has given North Bay cycling fans plenty to boast about in the past year. In addition to maintaining a start-to-finish lead in last year’s Tour of California, Leipheimer earned his highest showing yet in the 2007 Tour de France, winning the final Stage 19 time trial and placing third overall, just 31 seconds behind Discovery Channel teammate and Tour de France champion Alberto Contador. Now part of the newly anointed Astana Cycling Team (sponsored by a conglomerate of companies based in Astana, the capital of Kazakhstan), the 34-year-old Leipheimer will again be a strong contender for the Tour of California, which he’s called “the highest quality race the U.S. has ever seen.”

With the Tour of California attracting so many top cyclists, even Leipheimer admits that competition for the yellow jersey is fierce. “More and more of the world’s best want to come,” Leipheimer says. “I think next year we’ll see an even better field.”

Yet, this may very well be the Tour of California’s last year in Santa Rosa.

Faced with rising costs of hosting the Tour, and struggling to drastically reduce the 2008&–’09 budget, Santa Rosa barely has a scale on which to weigh its options for next year’s race. Though attendance has been consistently high—the community support of Leipheimer combined with a spectacular downtown finish have been crown jewels of the Tour itinerary—it simply costs too much for a city that’s currently working to cut $5 million from its budget to host the Tour of California.

In fact, Santa Rosa’s costs have nearly doubled from last year’s $64,000 to $121,000; of that, only $45,000 has been allocated from the city’s general fund, meaning that the remaining $76,000 must come from private sponsors. At press time, only $35,000 has been raised. Unless anyone has an extra $41,000 laying around, or unless the Tour organizers miraculously ask for far fewer services next year, then the Tour of California will likely have to visit a different city in 2009.

Important to keep in mind is that this is the way the Tour of California was initially designed, points out Raissa De La Rosa of Santa Rosa’s Department of Economic Development, “to mimic the Tour de France, or any of the great tours of Europe, where the sites change.”

In France, host cities also put up all of the funding for the honor of the world’s most prestigious bicycle race coming to their city. Initially, Tour of California organizers planned to phase in that same model here, “but the reality is that this isn’t France,” De La Rosa sighs, hinting that even Tour organizers are starting to realize the difference in enthusiasm on American shores. “We have great American cycling teams, but it’s just not the moneymaker here as it is in France.”

Key players this year include Paolo Bettini of Italy, two-time defending world champion of the UCI Road World Championship and 2004 Olympic gold medalist. Nicknamed “the Cricket,” the spry, 5-foot-6-inch Bettini tends to attack with a determined sprint and made headlines by winning the 2006 Giro di Lombardia classic in tears after his brother died in a car accident. In last year’s Tour of California, he played the back of the peloton in Marin, helping push contestants up the hills of Mt. Tamalpais, confident he would regain the time. He’s announced that 2008 will be his last year in professional cycling.

Another cyclist to keep an eye out for is 27-year-old Tom Boonen, a strong points leader in last year’s Tour de France. With dashing good looks, a lively personality and an impressive record (including a 2005 World Road Race title), Boonen is something of a George Clooney&–style celebrity in his native Belgium; he made news last year when he crashed his brand-new yellow Lamborghini to avoid hitting a cat. As a high-profile ambassador for cycling and a thoughtful competitor, Boonen’s presence in the Tour of California raises both the stature and the competitive stakes of the race, making him definitely one to watch.

Santa Rosa city manager Jeff Kolin has spoken with other cities in Sonoma County, hoping to keep the race local, but as usual, if private sector money doesn’t come through, the tour’s days in Santa Rosa will be over. “We really, seriously are looking for more people to step up to the plate just to even make it,” De La Rosa pleads. “We can’t even consider bidding on it next year if we can’t make the budget this year. The budget’s going to be tighter, and the general fund draw is going to be less.”

Jan. 27: Breakestra at the Juke Joint