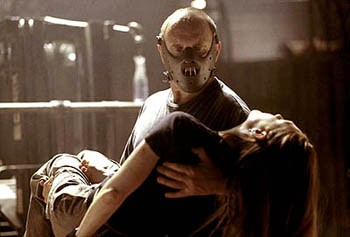 1. They are both brilliant doctors with a keen understanding of the human psyche.

2. They are both eloquent speakers, able to take complex scientific issues and restate them in elegant, understandable English.

3. They both have a thing for brains.

Unlike the fictional Dr. Lecter, however, Dr. Ratey’s interest in that spongy, three-pound organ is not the least bit culinary–a fact his patients will undoubtedly be relieved to hear.

Until he was invited by me to sit through Hannibal–the hit sequel to 1990’s Oscar-winning Silence of the Lambs–Ratey had never even considered using the human brain as a side dish, with or without onions.

But everything is a matter of taste. With a box-office take of 100 million and counting, audiences are clearly eating Hannibal up, taking special delight in the much-discussed scene (one that gives new meaning to the word headwaiter) in which Lecter (Anthony Hopkins) dresses up in his Sunday best to serve up the frontal lobes of one unfortunate fellow’s brain, sliced off and sautéed with shallots and a dash of white wine, while the poor, anesthetized slob sits there babbling and slurring.

“The one good thing about that scene,” says Ratey, “is that people are leaving the theater asking serious questions about the human brain. Which part does what? How much of the brain do we need? Very good questions.”

An associate clinical professor of psychiatry at Harvard Medical School, Ratey is the author of several books on psychology and human behavior, the most recent of which is the appealingly titled A User’s Guide to the Brain .

The book is an exciting read that makes brain science seem like an action adventure, and Ratey is just as accessible and entertaining in person. He’s the kind of person who, discussing a film like Hannibal, will toss off such comfortably down-to-earth remarks as, “It’s kind of stupid to take someone’s brain apart like that” or “The brain is full of cross-fibers going all over the goddamn place.”

THREE FACTS the brain-eating scene got right, according to Dr. Ratey:

1. The brain has no nerve cells, so carving it up like turkey would technically not hurt.

“Assuming the person didn’t go into shock,” Ratey allows. “I suppose it’s possible to scoop out a few spoonfuls of brain while the guy makes wisecracks, and maybe he wouldn’t go into shock because you don’t lose that much blood when you do that sort of thing–but, oh my god!”

2. The removal of some prefrontal lobe tissue would cause some slurred speech, but the subject would maintain his basic language skills.

3. While brain damage can cause changes in people’s personalities, since the guy in question was kind of a sleazebag, the procedure would probably make him no worse a person.

“What Lecter tells him is very true,” Ratey affirms. “He says, ‘You don’t really need this part of your brain,’ then something about ‘social graces’ and his being fairly rude to begin with. That’s accurate, because the part of the brain that Lecter was cutting has a major role in controlling our social interactions, our level of politeness, our empathy and sympathy to other people’s feelings. That guy was a sleazebag, so he wasn’t using much of that anyway.”

Just how much of our brains can we do without?

“Well, there are people who have hemispherectomies,” Ratey says, “in which one entire half of their brain–a whole hemisphere–is surgically removed. There are problems with motor skills on the opposite side, obviously–you’d be severely impaired–but most of their language function can be gradually picked up by the other half of the brain. So, can you live with half of your brain missing? Yes. Will you still function? Not very well.”

Not surprisingly, Ratey is much more interested in what went wrong with Hannibal Lecter’s brain than in how Lecter would go about making a meal of someone else’s. Especially interesting to Ratey is the common-sense method Hannibal uses to try and escape justice at the climax of the film.

“Hannibal would try that,” Ratey reveals, “because–and this is kind of interesting–people like Hannibal don’t feel very much. Their brains are such that normal levels of sensation can’t register a spark. They have to press for the bizarre, the weird, the extreme. There’s a whole list of things they often don’t feel any other way.”

According to Ratey, it’s like this: Though fairly rare, such individuals are hard-wired, so to speak, to be impervious to normal levels of stimulus. In scary or life-threatening situations that would give the rest of us a coronary these medical marvels maintain completely normal levels of blood pressure and pulse.

“In psychobabble language,” he says, “these people are not connected to their own lives; they’re sort of ‘not into it’ as much as the normal people. This is how we get people like Jeffrey Dahmer, people devoid of human feelings of pain, sadness, and attachment.

“It so happens,” Ratey concludes, “that all the Lecter types are missing that.”