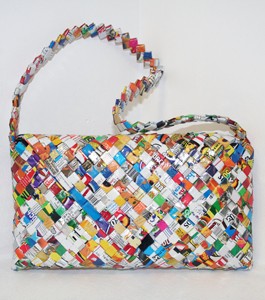 While prisoners in Mexico are thanking a few Sebastopol residents for an unexpected hand-up, buyers of eco-chic can be thanking the prisoners for an unexpected handbag. Purses made by Veracruz prison inmates—colorful handbags woven from hundreds of reclaimed junk-food bags, including the hint-of-bling silver from metallized bag linings—are an ingenious way to reclaim garbage, doll up an outfit, enhance fair trade and provide paid employment for those prisoners whose petty crimes stem from poverty and not depravity.

But political unrest in Mexico is presenting a slight business snag. Swiss-born Alexander Laszlo explains that he and his Mexican-born wife, Kathia Laszlo (both sustainability educators locally), stumbled upon the handbag project while visiting relatives in Tamiahua, a seaside village in the state of Veracruz. “In the street market, Kathia picked up an interesting bag, shiny and multicolored,” said Laszlo. “She asked what it was made of, and the market woman said it was made from Doritos- and Cheetos-type bags taken from the garbage and washed. The woman explained that her husband made the bags in prison.”

When Kathia bought the purse and wore it in San Francisco, she was stopped constantly, Laszlo explained. “We would be walking downtown and couldn’t go 10 paces before someone would stop her and say, ‘I love that bag,’ or ask her where she got it or whether she made it,” said Laszlo. “We saw the interest and thought maybe we could provide a market for the product.”

After years of meetings with prisoners and prison officials, the Laszlos created a model for production that allowed prisoners to earn wages for making handbags. Most petty-crime prisoners who have a poor family network and no job history, the couple learned, get out of prison without a safety net and are forced to return to theft for survival. Often, they get re-incarcerated. In the Laszlos’ new program, released prisoners have the option of staying as part of a halfway program, establishing a work history.

“We are still in the process of fair-trade certification, but things are a little stalled because there have been changes in the prison system directorship—it’s all very political,” says Laszlo. “We are constantly in touch with our counterparts in the prison system, but the program is moving slowly. What will come of it, we don’t know.”

While the program’s future awaits the settling of such unpredictable elements as ongoing drug wars and Mexican political turmoil, there are still bags being made and orders being taken.